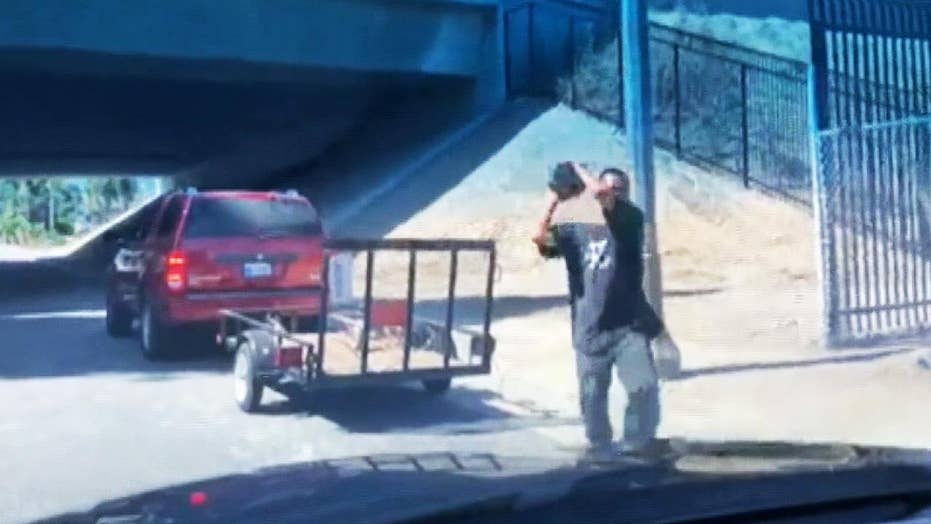 A man who was part of a group illegally dumping trash under a Los Angeles-area freeway hurled a large concrete block at the car of a Southern California resident who, moments earlier, confronted the group, an alarming encounter that was caught on video by the concerned citizen.

Amos Young said he was driving on Towne Avenue underneath the 60 Freeway in Pomona east of Los Angeles when he spotted the group of three men illegally dumping on the side of the road.

Young told FOX11 he went to confront the men about dumping and he used his phone to record the incident. When one of the men realized Young was recording, he immediately became aggressive with the driver.

"All of a sudden, this guy is walking up to my car. I was thinking, 'Hey he just wanted to ask a question, find out who I was,'" Young told FOX11. "Second later, he started beating, bumping, kicking and breaking down my license plate."

The man then can be seen on video throwing a large concrete block at Young's vehicle, causing his windshield to shatter.

"He put a huge, huge rock directly into my windshield, shook me up and the only thing I could do was work to defuse the situation," he told FOX11. "So I stayed in the car as he continued, hurling this huge rock into my windshield and then he ran off."

While Young contacted the police, the men, who were not immediately identified, quickly dispersed. One of the men fled the area on foot and the other two left in a red Dodge Durango with a California disabled person's license plate, number 108RJ.

The Pomona Police Department is investigating the incident.