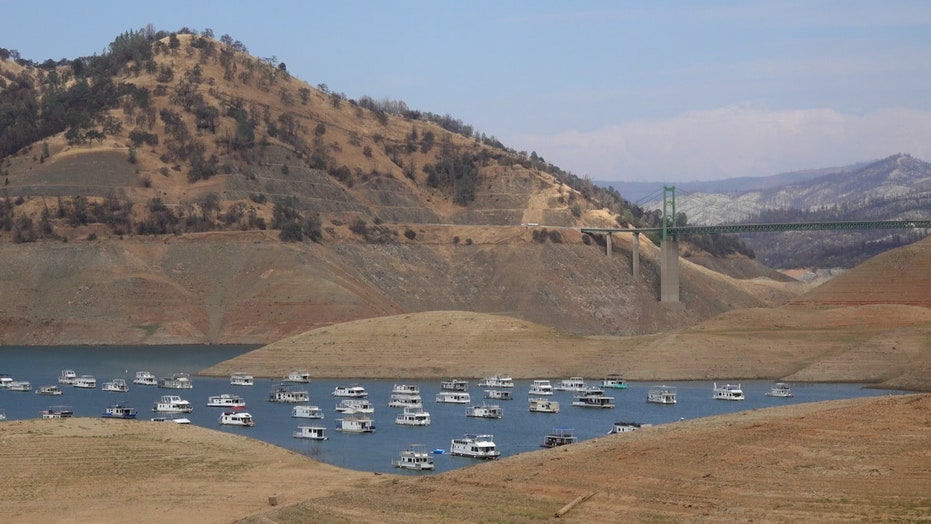 One of California's largest water reservoirs is now at a historic low, forcing houseboats out of the water. Officials say these drought conditions are part of the new normal in California.

Officials say it's the stark reality for one of America's largest states and in California, this is a new normal.

"We have to stop thinking about drought is an emergency that only happens once in a while and we respond to it as a rare event, but recognize that this is becoming the new norm and we need to shift water management approaches that say we have a new normal now and we have to manage things differently," California Direction of Water Resources Interstate Resources Manager Jeanine Jones told Fox News.

Old mine shafts, trees and the remnants of buildings have reappeared at one of California's largest reservoirs, Lake Oroville. The Lake is now at its lowest level since September of 1977, the same year California experienced one of the worst droughts.

"It's kind of a whole new beast," Jared Rael said.

Rael manages more than a thousand properties on Lake Oroville at the Bidwell Canyon Marina. He's been forced to have people move off the water because the water levels continue to drop.

Dozens of houseboats now sit on the rolling hills that look over Lake Oroville. Due to the water levels exposing trees that were growing before the area was flooded with water, those houseboats were forced to move and with little space for them to go and the only option was to put them back on land.

"One way that we look at is what we're seeing in California now reflects expected impacts of climate change. The idea that things would be getting warmer and drier," Jones said.

Warmer and drier also means there is an increased threat for wildfires.

"One of the things we certainly see in the summertime in these very dry and warm years, is the wildfire impacts," Jones said. "We saw it in the last drought and unfortunately, we are seeing it again this year."

The National Oceanic and Atmospheric Administration has reported California and several other Western states have had the hottest summer on record, exceeding the 1936 Dust Bowl Summer only by less than .01 of a degree.

Almost 60% of the west is facing "extreme drought" conditions, and 98.32% of the states are facing "abnormally dry" conditions.

"I hope we get rain," Rael said, a statement echoed by many in the West.

The rainy season is expected to begin near or around the winter months, according to Jones.