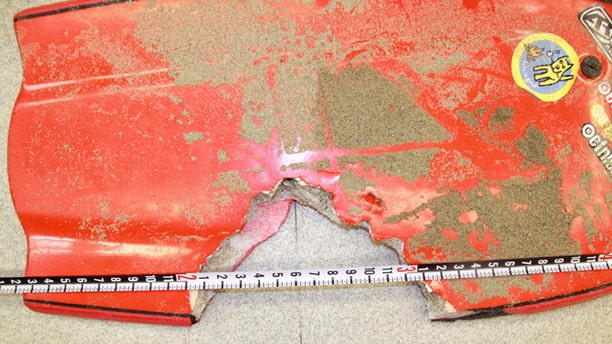 Oct. 22, 2010: This photo provided by the Santa Barbara County Sheriff's Department shows the bite of a shark on a boogie-board on which Lucas Ransom, 19, in a shark attack at Vandenberg Air Force Base near Lompoc, Calif. (AP)

Matthew Garcia was surfing two feet away from his friend who was bodyboarding when he heard a desperate cry for help. Within seconds, a shark flashed out of the water, bit into his friend's leg and pulled him under in a cloud of blood off the coast north of Santa Barbara.

"When the shark hit him, he just said, 'Help me, dude!' He knew what was going on," Garcia told the AP as he recounted his friend's death. "It was really fast. You just saw a red wave and this water is blue -- as blue as it could ever be -- and it was just red, the whole wave."

As huge waves broke over his head, Garcia tried to find Lucas Ransom in the surf but couldn't.

He decided to get help, but turned around again as he was swimming to shore and saw Ransom's red bodyboard pop up. Garcia swam to his friend and did chest compressions as he brought him to shore.

The 19-year-old already appeared dead and his leg was mauled, he said.

The University of California, Santa Barbara, junior had a severe wound to his left leg and died a short time later at Surf Beach, the Santa Barbara County Sheriff's Department said in a statement. The beach, 130 miles northwest of Los Angeles, is on the property of Vandenberg Air Force Base but is open to the public.

Sheriff's deputies patrolled the coastline to search for Ransom's missing leg but were only able to recover the bodyboard, which had a 1-foot segment on the side bitten off.

Federal and state Fish and Game officials were working to identify the type of shark that attacked Ransom.

The ocean was calm and beautiful before the attack, with large wave sets that the friends had been tracking all week as they moved down the West Coast from Alaska, Garcia said.

The shark, which breached the water on its side, appeared about 18 feet long, Garcia said.
"There was no sign, there was nothing. It was all very fast, very stealth," said Garcia, 20.

The pair, best friends since they were on the water polo and swim teams together at Perris High School in Riverside County, had joked the night before about the chances they would be attacked by a shark, Garcia said. It was the first time either had been to that particular beach and they planned to surf until about 11 a.m. and then go to class, he said.

"We were just in perfect water, the waves were perfect, great barrels. It was picture-perfect conditions," he said. "You hear a surfer say, 'Oh, perfect waves' -- well, the waves do not get any better than they were today."

Ransom, who was from Romoland in Riverside County, was a junior at UCSB majoring in chemical engineering, but was in the process of changing his major to chemistry because he wanted to be a pharmacist, said his mother, Candace Ransom.

He had been home last weekend but spent most of the time studying for midterm exams, she said.

She last spoke to her son Friday morning, when he told her he was going to surf sets of 8- to 10-foot waves at a beach that was new to him. His mother encouraged him not to go in the water, she told the AP.

Surf websites reported that the waves were 6 to 8 feet high at Surf Beach on Friday. The scientific standard is to measure the height from the back of the wave while some surfers like to measure the face of the wave.

"I said, 'Honey, if they're so pretty why don't you just sit and watch them. You're at a place you've never been to before,"' Candace Ransom said. "He said, Mom, don't worry, I'll be fine and I'll call you when I finish up."

Ransom's parents said their son was an avid swimmer and was on his high school's water polo and swim teams, where he won titles in the 50- and 100-meter freestyle and relays and he ran marathons with his mother. He also worked as a lifeguard at a community swimming pool in Murietta.

It was there, at age 16, that Ransom and two other lifeguards rescued a young boy in 2007 after spotting him floating on the water. He had been certified as a lifeguard just five months before and received an award from the local city council.

"He was a son that every mother would be proud to have as a son," his mother said. "He had no fear. He did what he loved the most and he couldn't have left the world in a better place than where he was at."

Authorities have issued several warnings this year after great white shark sightings up and down the California coast.

There have been nearly 100 shark attacks in California since the 1920s, including a dozen that were fatal, according to the California Department of Fish and Game. But attacks have remained relatively rare even as the population of swimmers, divers and surfers sharing the waters has soared.

The last shark attack on Surf Beach was in 2008, when what was believed to be a great white shark bit a surfer's board. The surfer was not harmed.

The last fatal attack in California was that same year, when triathlete David Martin, 66, bled to death after a great white shark bit his legs about 150 yards off of a San Diego County beach.
Randy Fry, 50, died from a great white attack in 2004 while diving off the coast of Mendocino, north of San Francisco Bay.

In 2003, a great white shark killed Deborah Franzman, 50, as she swam at Avila Beach, about 30 miles north of Vandenberg.