A California school board member is facing criticism after comparing reopening schools amid uncertainty surrounding the coronavirus vaccination rollout to "White supremacist ideology" and "slavery" in a meeting earlier this week.

The comments from La Mesa-Spring Valley Schools Board Vice President Chardá Bell-Fontenot – which were confirmed to Fox News by Superintendent David Feliciano – come as the San Diego-area district’s board voted in favor Tuesday of bringing students back to classrooms for hybrid learning starting April 19.

"I don’t think our plan should revolve around a vaccination, solely," a person is heard saying in a YouTube audio version of that board meeting posted online by the district. "I think there are a lot of other factors that are really important for children's health and well-being that we need to take into account here and to only put all of our eggs in one basket is doing a great disservice to our children."

"Without any teachers we don’t have the ability to teach the students so that is where we have to start. We can’t just say the kids can go back into the classrooms and there is no vaccinated teachers there willing to do that," Bell-Fontenot then responds. She earlier argued that the vaccine rollout locally is inefficient and therefore poses a problem for setting a timeline for reopening as teachers may not know when they will get their shots before being asked to report back to buildings.

"That’s the problem I’m having... so how are we forcing people? That seems like a very White supremacist ideology to force people to comply with and conform without thinking about all of their intersecting factors and barriers that exist for all families," she continues. "We are thinking about one type of family when you are speaking right now. Just letting you know – privilege, check it you guys."

"OK, let's stay focused," one person is then heard saying. 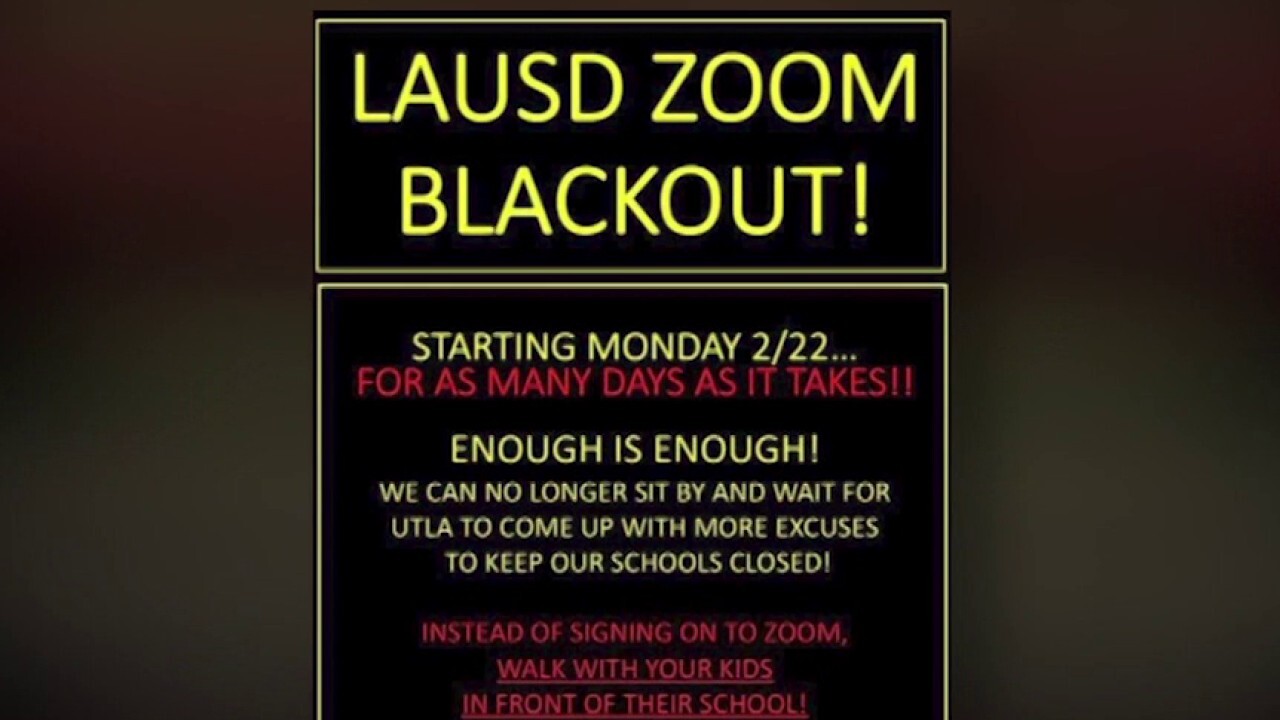 Fed up Los Angeles parents say they will not sign in to Zoom courses and stage protests instead; mom Cynthia Rojas and her 3rd grader Nicholas join 'Fox &amp; Friends' to discuss the strategy.

In other clips shared on social media, Bell-Fontenot says while speaking to another person in the meeting about reopening that "we don’t have to give anybody any date" and "I know that you are new to the school board – I am not saying this as a slight to you, but we do not have to make a decision today."

In a statement released by Feliciano to parents, he wrote that "as you may have heard, at Tuesday’s board meeting, Trustee Charda Bell-Fontenot behaved in a manner the Board does not condone, nor did her behavior represent our values and our commitments to our students, community and to each other.

"We have received many emails and calls of great concern from our families and community members. Please note that school board trustees are not district employees; they are elected officials," he continued. "The school district does not have the authority to release duly elected trustees from their positions."

"The district will continue to forward all hate mail and threatening communications to law enforcement," he added.

Bell-Fontenot did not respond to a request for comment from Fox News.