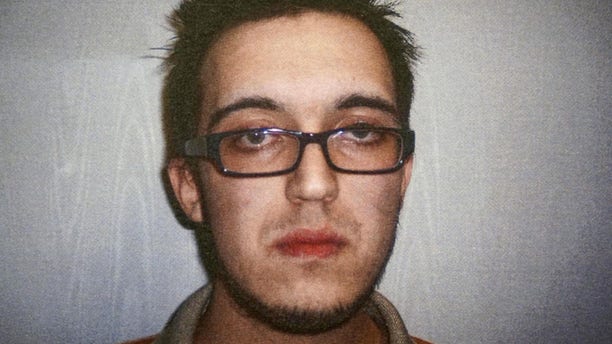 April 14, 2014: This booking photo released by the North Berkshire District Court in North Adams, Mass., shows Alexander Ciccolo, charged with drunken driving. Authorities said Ciccolo, the son of a Boston police captain, was arrested July 4, 2015 in Adams, Mass., and is accused of plotting to detonate pressure-cooker bombs at an unidentified university and to broadcast the killings of students live online to show his support for ISIS. (Northern Berkshire District Court via AP)

A police captain's son accused of plotting an attack on a college campus to support the Islamic State (ISIS) group was indicted Thursday on terrorism charges.

A federal grand jury indicted Alexander Ciccolo on one count each of attempting to provide material support to a foreign terrorist organization and attempting to use weapons of mass destruction. Those charges were added to a pending indictment charging Ciccolo with being a convicted person in possession of firearms and stabbing a nurse with a pen during a jail intake process.

Ciccolo was arrested last July in a plot to detonate homemade bombs similar to the pressure cooker bombs used in the deadly 2013 Boston Marathon attack. Twin bombs placed near the marathon finish line killed three people and injured more than 260 others.

Boston police Capt. Robert Ciccolo alerted the FBI after his son, who's 23, said he wanted to join ISIS. Alexander Ciccolo was arrested after he received four guns he ordered from a person cooperating with authorities.

The indictment said that Ciccolo, who also used the name Ali Al Amriki, plotted to bomb an unidentified state university outside Massachusetts.

During a detention hearing after his arrest last year prosecutors said he received four guns from a person cooperating with members of the Western Massachusetts Joint Terrorism Task Force.

Prosecutors say Ciccolo had spoken with the cooperating witness in recorded conversations about his plans to commit acts of terrorism inspired by ISIS, including setting off improvised pressure cookers filled with black powder, nails, ball bearings and glass in places where large crowds gather, such as college cafeterias. They also said Ciccolo was seen buying a pressure cooker similar to those used in the marathon bombings the day before his arrest.

Ciccolo has been held without bail since his arrest a year ago. He is schedule to appear in U.S. District Court in Springfield on July 7.