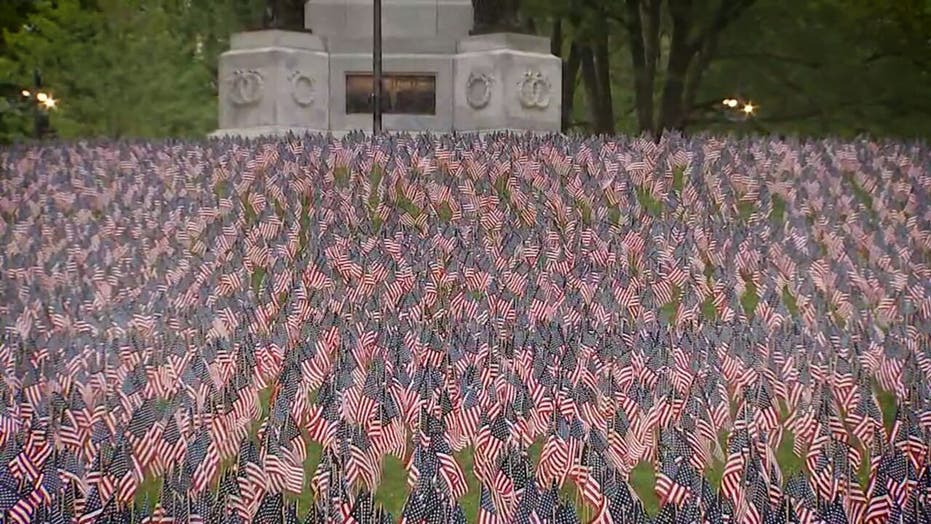 Fox's Rob DiRienzo explains how some Americans are finding a new way to honor our country's fallen soldiers through #HeroesFlagGarden.

BOSTON – Every Memorial Day weekend, a sea of red, white, and blue covers Boston Common. More than 37,000 American flags gently sway in the breeze to honor those who gave everything for this country.

But not this year, because of the coronavirus pandemic.

"All those flags waving in the breeze, it's just -- it's a tear-jerker,” said Paul Monti, who lost his son in Afghanistan in 2006.  "It's quite devastating that we're not able to do it.”

Monti's son, Army Sgt. 1st Class Jared Monti, was killed by a Taliban rocket-propelled grenade when he tried to save a wounded fellow soldier. In 2009, President Barack Obama awarded him a posthumous Medal of Honor.

“It was his care for others that eventually cost him his life,” Paul Monti said of his late son.

Paul Monti reflects on his son's Medal of Honor, the highest and most prestigious military decoration. (Rob DiRienzo)

The proud father was crushed when he found out that he couldn't help plant the flags on the Common this year. Nor could he do so at the Massachusetts National Cemetery, where Jared is buried.

"This would have been our tenth year doing it and we were really looking forward to it," Monti said.

Diane Nealon, executive director of the Massachusetts Military Heroes Fund, the organizer of the flag garden, said the decision to call it off this year because of coronavirus was tough.

"Asking hundreds of volunteers to come down to Boston Common and plant 37,000-plus flags was a difficult thing for us to get our head around," Nealon said, adding that as many as 500 people help plant the sea of flags at one time. "We thought that it would be making some folks unsafe."

So, she had to come up with another way to honor those who sacrificed everything for this country.

This year, instead of making the display in the center of downtown Boston, she's calling on Americans to create patriotic displays of their own in their front yard. She's hoping that if people post them online, with the hashtag #HeroesFlagGarden, the collective display can be bigger than ever before – virtually.

For those who can't get out to buy flags – or don't have front yards – the Massachusetts Military Heroes Fund created a downloadable flag that can be posted in a window.

Monti has dozens on American flags on display in his front yard – but he emphasized that they're not just to remember his son.

Paul Monti stands by his American flag display at his home in Raynham, Mass. (Rob DiRienzo)

"The flags aren't just for Jared, they're for everyone that's ever served the country and especially for those that have lost their lives," Monti said.

He said even in the time of COVID-19, you can still find ways to pay your respects this Memorial Day.

"Fly a flag in front of your house, show your pride in America," Monti said. "You see a soldier, you can't shake his hand, I guess, but you can at least say thank you for your service."

The Montis' father-son bond was the inspiration for the country song "I Drive Your Truck" by Lee Brice. In the 14 years since his son's death, Paul Monti has started a scholarship in Jared's honor, in addition to his volunteer and advocacy work on behalf of veterans and fallen soldiers.