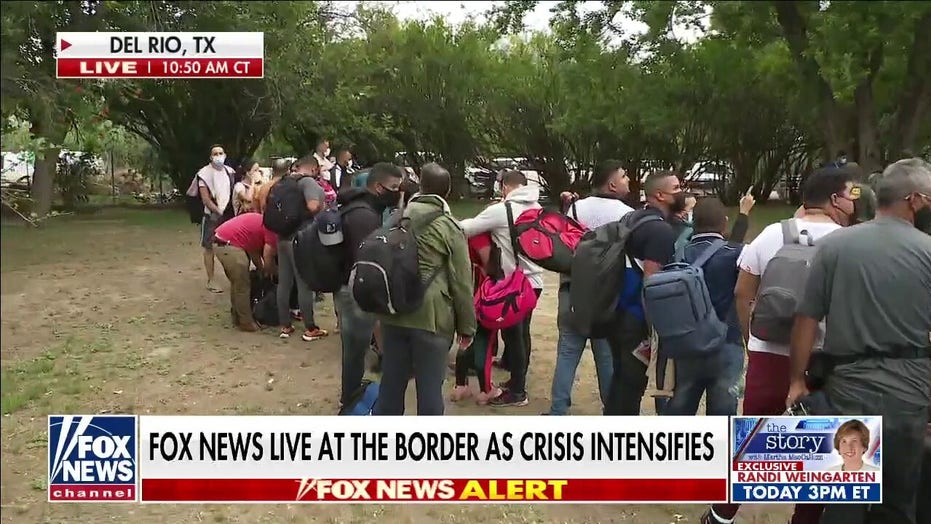 Fox News captured dramatic live video of migrants, including young children, crossing the Rio Grande in Del Rio, Texas, on Monday as a surge of border crossings continues to cause problems for the Biden administration.

"You see the steady stream of people coming across the border with Mexico entering our nation without going through a legal checkpoint, without any of those things. You don't see them being COVID tested right there, right?" narrated anchor Harris Faulkner of "The Faulkner Focus."

"Just moments ago there appeared to be an elderly gentleman they were helping out of the river. Some have camping gear so they can spend the night and do what they need to do. This is a heavy stream of people. A lot of children in the group that we are seeing now, too. Women and children in this group. Looks like that woman is praying as she comes across," Faulkner continued. "We have seen instances where our Border Patrol have had to get engaged to save people. That water is moving."

Migrants hoisted young children above the current that was sometimes knee-deep for adults. During the mornings when the river is low, smugglers start sending groups across the Rio Grande. They come clutching babies and backpacks and slowly make their way across the river on foot, stepping from one small island to another.

All of the migrants in the group of roughly 50 people told Fox News that they were from Venezuela. About half of them said they have family in the U.S.

Local Border Patrol has been overwhelmed with more than 5,000 apprehensions in the last week.

Meanwhile, White House press secretary Jen Psaki recently blamed the "nature" of the media for being a "big driver" behind the push to say there’s a border "crisis."

"But really a big driver was we understand and know the nature of some components of social media and media these days and we just didn’t want to feed into that on this issue or really any issue," she said in a podcast interview.

The White House's claim that the border surge is "cyclical" or seasonal, however, has been widely disputed.