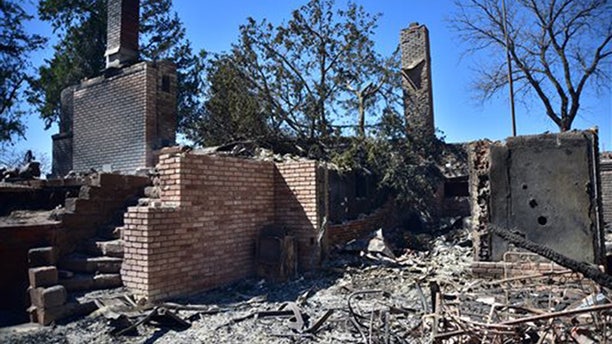 Fire damage to a home Thursday, March 24, 2016 near Medicine Lodge, Kan. A fire that started Tuesday in Oklahoma has now burnt near 400, 000 acres in Kansas and Oklahoma. (Andrew Whitaker/ The Hutchinson News via AP)

Firefighters trying to snuff out the biggest wildfire in Kansas history are getting help from military helicopters — and a potential assist from looming rain or snow.

Four UH-60 Black Hawk helicopters from the Kansas National Guard were deployed Saturday in the effort to contain the persistent prairie blazes that since Tuesday have charred at least 620 square miles in Oklahoma and southern Kansas, destroying at least two homes and some livestock. No serious human injuries have been reported.

At least two of the helicopters have 660-gallon buckets that will be used to dump water from local sources onto the flames, said Ben Bauman, a spokesman for the Kansas Adjutant General's Office. The National Guard also was contributing a fuel tanker truck and another ground support vehicle.

Firefighters focused again Saturday southwest of Wichita in Butler County, where only 15 percent of the blaze that has scorched 427 square miles of the county was contained, said Darcy Golliher, a spokeswoman for the Kansas Incident Management Team.

The National Weather Service said the area where the fire has raged, which borders Oklahoma, may get one-tenth to a quarter inch of rain or snow Saturday night or Sunday morning.

"There's still a bit of uncertainty about how much they could get," said Andy Kleinsasser, a meteorologist with the weather service's Wichita office. "Hopefully they can get a decent dousing. Anything is better than nothing."

Shawna Hartman, a Kansas Forest Service spokeswoman, said slightly windier conditions prevailed Saturday compared with the previous day. And while she expects the forecast precipitation to add welcome moisture, "it really won't do anything to the fire that's actively burning."

Still, she said, "we don't anticipate the perimeter (of the fire) increasing at all."

The prospect of relief from rain may offer little solace to 87-year-old Don Gerstner, a Korean War veteran who along with his wife, Carol, lost their 19th-century home near Medicine Lodge to the fire after the two narrowly escaped it.

Gerstner said he looked out his kitchen window Wednesday and saw what he described as fast-approaching "wall of fire." He yelled for his wife to get her pocketbook, and the couple fled with their dogs, at times driving through flames to make their getaway.

The couple watched from afar as the fire consumed their home of 54 years, much of the structure built with bricks from the county's old courthouse.

Now facing the task of starting over, Carol Gerstner lamented: "At our age, it's just hard to get used to something different."

But her husband said he's seen worse. "It's not as bad as Korea," he laughed.