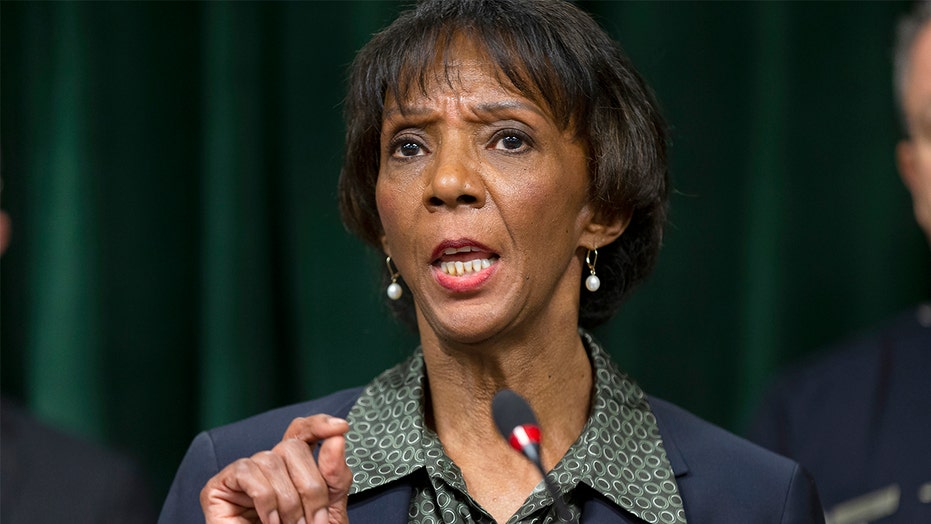 The husband of Los Angeles District Attorney Jackie Lacey was charged Monday in connection with pulling a gun on Black Lives Matters protesters outside their home in March, a move that further inflamed an already fraught relationship between activists and Lacey's office.

Jackie Lacey said the couple was awakened early March 2 to protesters who had knocked on their front door with jopes of meeting with Los Angeles County's top prosecutor. In a video tweeted by Melina Abdullah, a Black Lives Matter organizer, David Lacey, a Pan-African Studies professor at California State University, Los Angeles, is seen answering the door and pointing a gun at the protesters.

"Get off of my porch. I will shoot you," David Lacey said. "We're calling the police right now."

One woman is heard saying: "Good morning. Are you going to shoot me?"

In a statement to Fox News, Lacey said her husband acted in fear for her safety.

"The events that took place earlier this year have caused my family immense pain. My husband acted in fear for my safety after we were subjected to months of harassment that included a death threat no less than a week earlier," she said. "Protesters arrived at my house shortly after 5 a.m. while I was upstairs. My husband felt that we were in danger and acted out of genuine concern for our well being."

"My client and I are disappointed that the Attorney General's Office felt that the conduct at issue amounted to criminal behavior," Tyre said. "We disagree entirely with their assessment, but we have the utmost faith in the justice system, and we are confident that the correct result will be reached."

He added that his client's instinct "is forever and always to protect his wife and his family and to keep them safe from physical harm."

In this Jan.6, 2020 file photo Los Angeles County District Attorney Jackie Lacey talks during a news conference at the Hall of Justice in Los Angeles. Lacey's husband, David Lacey, on Tuesday was charged in an incident on March 2, 2020, in which he pointed a gun at Black Lives matter protesters outside the Lacey residence, as they demanded a meeting with her at her home the day before a primary election for her seat. (AP Photo/Damian Dovarganes, File)

In a news conference following the incident, Jackie Lacey said Black Lives Matters protesters have sought to "embarrass and intimidate" her. Her offers to meet with them in the past to discuss their concerns have been turned down, she said.

She offered an apology on behalf of her husband, saying "he meant no harm."

Lacey, a two-term incumbent, is facing George Gascon, the former San Francisco district attorney, in a November runoff. She has clashed with Black Lives Matters in the past over her office's refusal to prosecute police officers involved in fatal shootings and cases of alleged excessive force.

She's also received criticism over the high incarceration rates in the Los Angeles County jail system and the racial disparity of inmates.

Criticism of her office has spiked since nationwide protests over police brutality and racial injustice broke following the death of George Floyd. Several elected officials – including Rep. Adam Schiff, D-Calif. – have since pulled back their endorsements of Lacey.