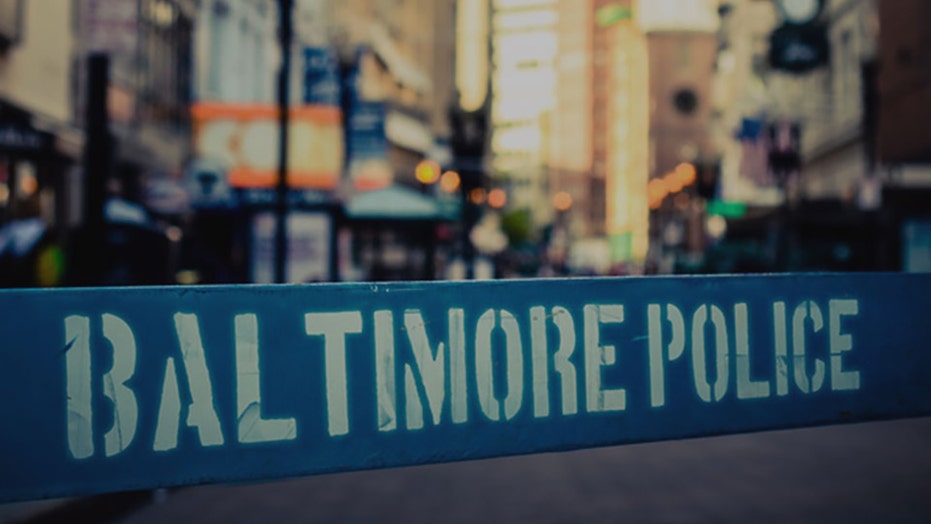 Baltimore has reported at least 240 homicides in 2019.

The first weekend in September was another violent one in Charm City.

In the span of about 16 hours, seven people were shot -- two fatally -- in various neighborhoods throughout Baltimore.

The Baltimore Police Department said on Facebook the violent streak began around 9:30 p.m. on Saturday. Officers arriving at the scene in West Baltimore found a 39-year-old with a gunshot wound to the head.  He was pronounced dead on the scene.

About two hours later a 28-year-old man was discovered shot on Milton Street in East Baltimore. He was transported to an area hospital and listed in serious condition, according to police.

Baltimore is one of the most dangerous in America, according to the FBI, totaling more than 300 homicides for four years running. (AP Photo/Steve Ruark)

Early Sunday, police responded to a neighborhood just north of Baltimore's Penn Station for a report of a shooting around 1:22 a.m. Officers located a 27-year-old man with a gunshot wound in the leg who was later transported to an area hospital for treatment.

Just before 7 a.m. on Sunday, police went to Gold Street and discovered a 26-year-old man suffering from gunshot wounds to the torso, neck and head. The man was transported to an area hospital, where he later died, according to police.

About an hour later a double shooting was reported in South Baltimore on Filbert Street, where a 21-year-old man was shot in the back and transported to the hospital.

A short time later, a 23-year-old man suffering from gunshot wounds to the arm, leg and groin walked into an area hospital. Police believe both victims were on nearby Pennington Avenue when an unknown suspect began shooting.

Mike Callow, who was near the shooting on Pennington Avenue, told FOX45 Baltimore on Sunday the violence is overwhelming.

“I think there’s a lot of senseless killings out here,” he said.

There have been at least 240 homicides this year in Baltimore, according to statistics compiled by the Baltimore Sun. (Fox News)

Callow echoed calls to get the violence under control in Baltimore.

“It’s very upsetting. Nobody wants to see nobody get killed," he told FOX45. "Everybody has a value in life and purpose in life and it’s just sad seeing people die every day throughout the city."

By Sunday afternoon, Baltimore police were busy responding to yet another shooting in North Baltimore. Police said that incident happened around 1:40 p.m. when the 36-year-old male victim walked into an area hospital suffering from a gunshot wound to the leg.

"Due to the victim being very uncooperative with investigators, a location and suspect information is unknown at this time," police said.

Baltimore is in the midst of yet another violent year, with the homicide count now up to at least 240 reported homicides in 2019, according to statistics compiled by the Baltimore Sun. The city is on pace to have more than 300 murders for a fifth straight year.

"It's very sad seeing this," Callow told FOX45. "It seems like its every week, every couple weeks."

In addition to a police department that's distrusted by many residents, Charm City has seen a mix of chronically high rates of violent crime. The city of Baltimore is one of the most dangerous in America, according to the FBI.

Baltimore has been in the throes of a steep rise in violent crime since 2015, when the homicide rate spiked amid the city’s worst rioting in decades following the death of Freddie Gray, a black man who died in police custody. In 2017, the FBI placed the city on its "Crime in the U.S." list. Baltimore was listed well above that of any other large American metropolis, with the 342 homicides notched that year, yielding a stunning homicide rate of 56 per 100,000 people.

President Trump is scheduled to visit Baltimore on Thursday to deliver remarks at the 2019 House Republican Conference Member Retreat Dinner.

The visit will come after Trump's attacks on Democratic U.S. Rep. Elijah Cummings and his Baltimore-area district earlier this summer.

Trump called Cummings'  7th Congressional District a "disgusting, rat and rodent-infested mess" where "no human being would want to live."

A spokeswoman for the retreat told The Baltimore Sun there was no publicly available agenda and that the sessions will be closed to the media.  The newspaper reports several protests are expected outside the hotel where the retreat is to take place.