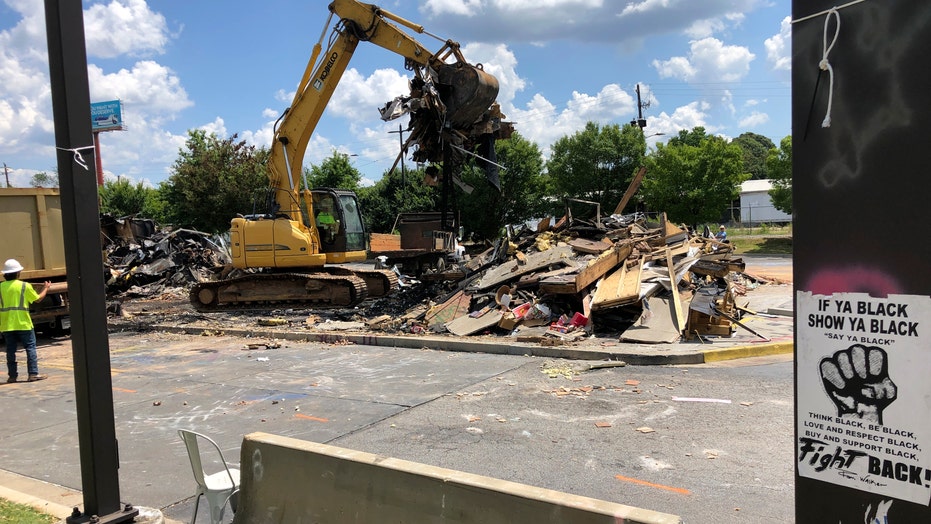 The Atlanta Wendy’s where Rayshard Brooks was killed by police last month was torn down on Tuesday, according to multiple reports.

Videos showed construction crews on Tuesday morning using an excavator to demolish the charred remains of the restaurant that had been set ablaze by protesters on June 13, the day after Brooks, 27, was killed. The site had served as a focal point of demonstrations in the following weeks.

“This is being done in a thoughtful way, with safety as the priority and in cooperation with city officials,” a Wendy’s official told the Atlanta Journal-Constitution. “There are no additional details to share at this time regarding this site.”

Brooks was fatally shot by police as he ran away from them, officials say. He had grabbed the stun gun away from one of the officers during a struggle as he was being arrested. Prosecutors said Brooks was not a threat.

His death reignited demonstrations in the city following weeks of violent protests across the U.S. over George Floyd’s death in Minneapolis on May 25.

Protesters had camped out at the torched restaurant for weeks, refusing to leave unless their demands for police reform and a memorial for Brooks were met, the paper reported.

A Wendy's restaurant is demolished Tuesday, July 14, 2020, in Atlanta. The resaurant was the scene where Rayshard Brooks was shot and killed on June 12, 2020, by an Atlanta police officer following a struggle during a DUI arrest. (AP Photo/Jeff Amy)

They were forced off the property a little over a week ago after 8-year-old Secoriea Turner was shot across the street from the restaurant while riding in a car with her mother.

Secoriea is set to be buried on Wednesday, according to the paper.

Three suspects have been arrested in the Wendy's arson case, including Natalie White, 29, whom Brooks identified as his girlfriend in bodycam footage from the shooting last month. She denies setting the restaurant on fire.

Former Atlanta Police Officer Garrett Rolfe and Officer Devin Brosnan both surrendered themselves to law enforcement last month, one day after charges were filed against them by the Fulton County district attorney over Brooks' death.

Rolfe faces 11 charges -- including felony murder -- while Brosnan was charged with aggravated assault and violating his oath, according to Fox 5.

Atlanta police said they believe Wendy's was responsible for tearing down the restaurant, not the city, the station reported.