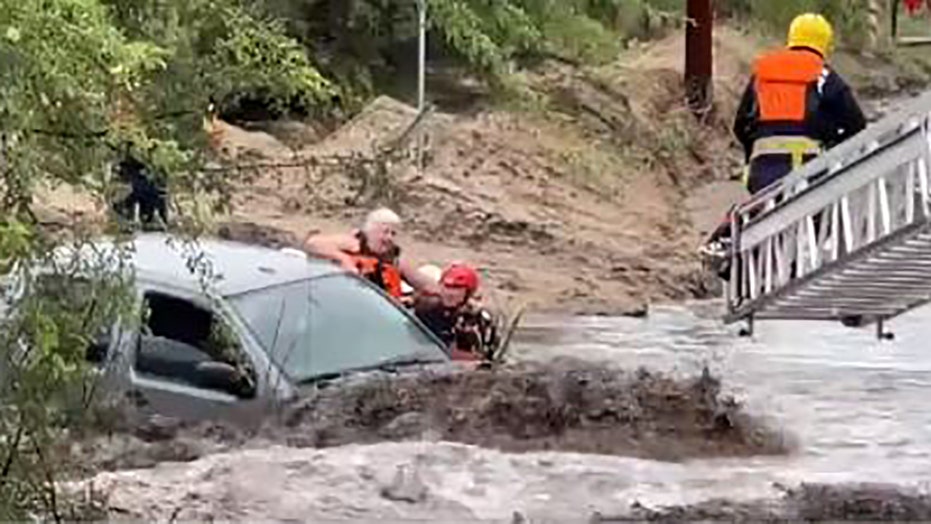 Arizona rescue teams saved three people trapped inside a pickup truck as raging floodwaters surrounded the vehicle near Tucson on Tuesday after a monsoon brought flash flooding to the southeast parts of the state.

OMAHA FLOODING: 7 PEOPLE ESCAPE AFTER BEING TRAPPED INSIDE ELEVATORS

Rescuers shared a video of one rescue that shows crews pulling a woman out of a pickup truck and carrying her to safety as muddy, fast-moving water rushed around them. Two other people were also rescued from the vehicle.

Crews had initially tried to use a ladder to reach the stranded citizens but couldn’t get to them due to the angle and rising water, Golder Ranch Fire District Assistant Chief of Operations Scott Robb told FOX10 Phoenix.

Rescuers pulled a woman to safety after she became trapped inside a vehicle amid a flash flood near Tucson, Ariz., on Tuesday. (Golder Ranch Fire District)

"The water was rising and deep for our people, so we use the ladder to get vests for the three patients in case they fell out and floated down," Robb said. "And then it was determined that on the other side of the river, it was a little more shallow for them to walk in and pull the patients out one by one and get them out on the other side."

In a second rescue that same morning, the driver of the vehicle was able to self-extricate, the GRFD said.

The National Weather Service had issued flash flood warnings and advisories for the area, which saw up to 3 inches of rainfall in the Santa Catalina Mountains near Tucson.