Arizona man arrested after 'dumping a woman out of her wheelchair' on train, police say

A man in Arizona was arrested after attempting to take a woman's wheelchair while she was riding the city's light rail last month before heroic passengers on board came to her rescue.

The Phoenix Police Department said the incident happened on Friday, Nov. 29, around 3:40 p.m. at the light rail stop on 12th and Jefferson Streets.

"Despite his reindeer slippers, this criminal was NOT spreading holiday cheer," police said.

CALIFORNIA MAN CHOKED, BATTERED EX-LANDLORD BEFORE CRASHING CAR IN ATTEMPT TO GET AWAY, SHERIFF SAYS

Officials said as the train pulled into the station, 26-year-old Austin Shurbutt grabbed the woman's chair as she tried to hold on before being eventually dumped onto the floor.

Surveillance footage from the train showed the moment that Shurbutt forces the woman out of her chair and onto the floor. 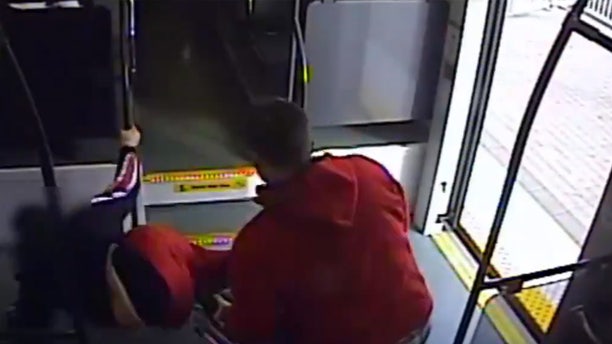 Austin Shurbutt is seen dumping a woman on the floor of a train from her wheelchair on Friday, Nov. 29. (Phoenix Police Department)

"Difficult video to watch as criminal tries to steal a wheelchair right out from under a woman, but hero passengers on the light rail came to her rescue," police said.

Other passengers on the light rail came to the woman's aid as she screamed for help to assist her and stop Shurbutt from stealing the wheelchair, according to police. 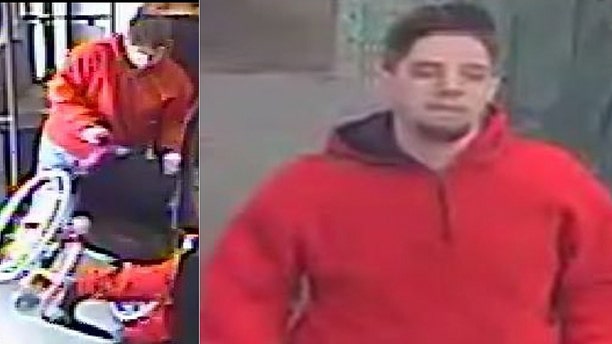 After the two good Samaritans stopped Shurbutt from taking the wheelchair, police said he fled the scene.

On Saturday, officials said the 26-year-old  was arrested after thousands shared his picture on social media. He has two outstanding warrants, and faces five new charges including robbery, kidnapping and assault, according to Phoenix police.

"He was still wearing the reindeer slippers when he was arrested," the department said.