As bitter cold took hold across the Midwest earlier this week, a sharp-eyed bus driver in Wisconsin was credited with helping rescue two children who were very underdressed for the weather conditions.

"No one had a coat on," Chamberlain told FOX6 on Tuesday. "It was snowing, and it was windy, and these were tiny little kids."

The boy and girl, ages 6 and 2, had wandered away with wind chills in the area just 3 degrees Fahrenheit when Chamberlain spotted them. Surveillance video from inside the bus released by the Waukesha Police Department shows Chamberlain taking off her coat to use it to warm up the children. 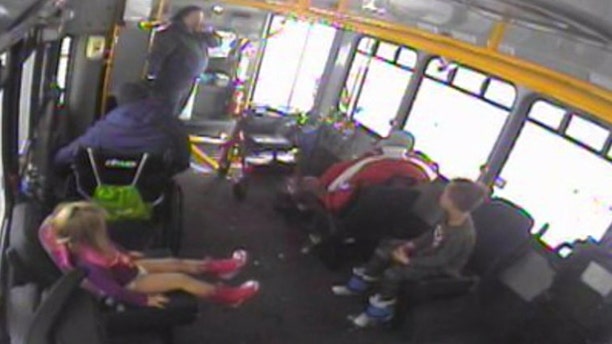 Nicole Chamberlain brought the two children on her bus after spotting them walking around in the cold on Monday. (Waukesha Police Department)

"It's OK, honey — we're gonna figure it out," Chamberlain could be heard saying on the video. "You're nice and warm on the bus."

Chamberlain contacted police but the children's family came to the bus before cops arrived, after witnessing "all the commotion," and they were reunited with their children.

"I'm just thrilled I was in the right place and right time, but even more thrilled the situation turned out to be even better than what you hear sometimes," Chamberlain told FOX6. "They went back, they were with a happy family. They were safe. That was most important to me."

The cold that's enveloped the eastern two-thirds of the country brought record single-digit temperatures to Chicago, set snowfall records in Buffalo and Detroit; dusted cars with snow in Memphis, Tenn.; and frozen lakes in Minnesota weeks earlier than usual.

"You know what? 70 percent of the country is below freezing right now except Tampa and L.A.," Fox News senior meteorologist Janice Dean said Wednesday on "Fox & Friends." 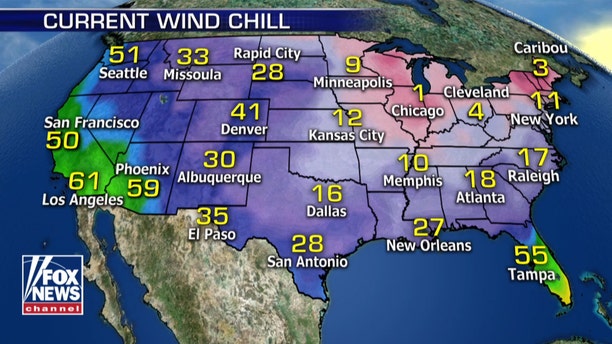 Bitter wind chills extend across much of the eastern U.S due to an arctic airmass on Wednesday morning. (Fox News)

"We had record-setting snow yesterday across the Great Lakes and the Upper Midwest, over two feet of snow. Freeze advisories from Texas all the way up towards the Southeast, that means we are dealing with below-freezing temperatures as far south as the Gulf Coast," Dean added. "We even had snow in Texas yesterday."

In Ohio, heavy lake-effect snow was blamed for causing whiteout conditions that caused several massive pileups across the state. On State Route 8 near Hudson, about 85 cars were involved in multiple crashes along the highway but no serious injuries were reported, according to FOX8.

Another large crash was reported on Interstate 90 in Lake County, according to the Ohio Department of Transportation.

Two fatal wrecks were also reported due to snowy and icy conditions, one on the Ohio Turnpike in Richfield and another in Clark County. In Richfield, the crash involved 16 vehicles in a construction zone and left a 21-year-old woman dead. One driver told FOX8 that a snow squall was reported right before and after the pileup.

Further north, seven passengers on a New York City-bound bus escaped serious injury when it turned on its side on a snow-slicked highway south of Syracuse. A section of Interstate 90 in Pennsylvania was back open Tuesday after being closed overnight because of jackknifed tractor-trailers. 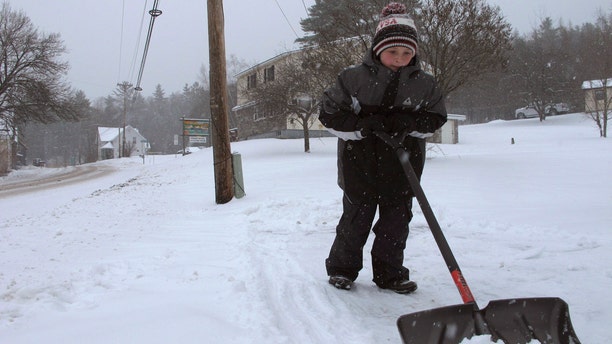 The Eaton County Sheriff's Office in Michigan said two women, ages 81 and 64, and a 57-year-old man were killed Monday in a two-vehicle crash caused by poor road conditions. And in Kansas, the Highway Patrol said an 8-year-old girl died in a three-vehicle wreck. Officials in central Wyoming searched for a 16-year-old boy with autism who disappeared Sunday wearing only his pajamas.

Behind the snow came another reinforcing shot of cold air that extended all the way to the Gulf Coast. 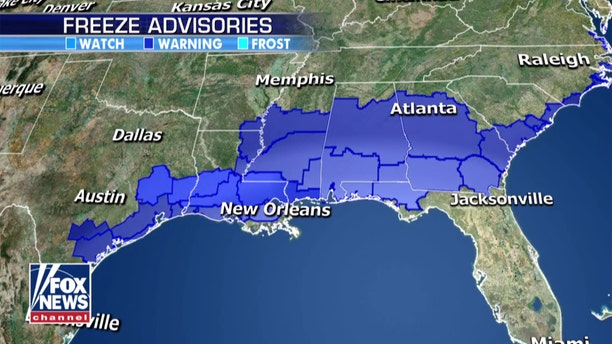 Freeze Advisories extend down to the Gulf Coast due to the Arctic air<br> mass. (Fox News)

Schools and businesses as far south as the Gulf Coast states opened late or closed Tuesday because of the unusual cold. About 20 school systems delayed opening across north Alabama under the threat of wintry precipitation, including all the public schools around Huntsville.

Freeze warnings reached from eastern Texas to coastal South Carolina, with overnight lows predicted in the 20s. Conditions are expected to stay frigid through the weekend, according to Dean.

"We are still dealing with the potential for snow across the Great Lakes and the Northern Plains," Dean said on "Fox & Friends." "Still cold today, tomorrow, even into the weekend but things will warm up next week."