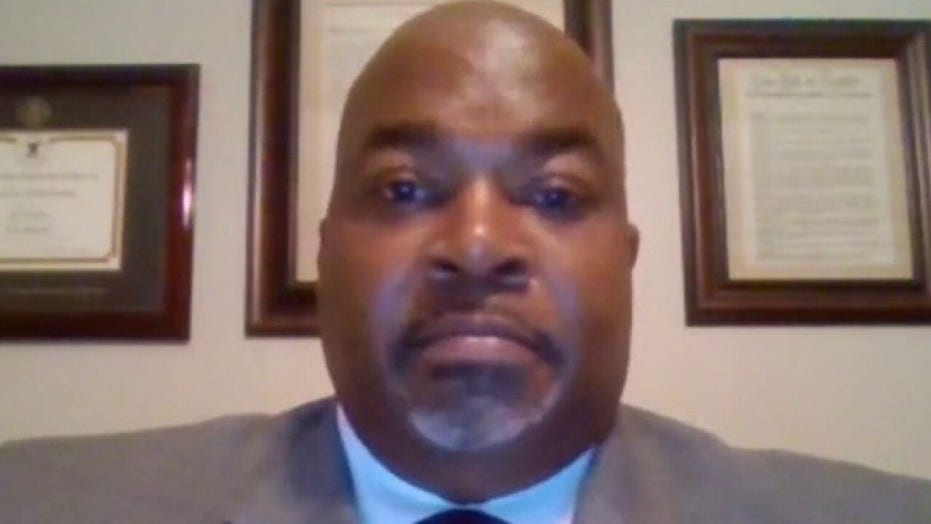 Attorneys representing the family of Andrew Brown Jr. claimed at a press conference in Elizabeth City, North Carolina, on Monday that the 20 seconds of body-camera footage privately shown to them at the Pasquotank County Sheriff's Office depicted "an execution," as Brown had his hands on the steering wheel and was not threatening deputies when he was shot in the "back of the head."

Authorities have not confirmed details, and Pasquotank County Sheriff Tommy Wooten II has said that Brown was fatally shot on April 21 as deputies were serving drug-related arrest and search warrants. An independent investigation into the shooting is being carried out by the North Carolina State Bureau of Investigation and Wooten petitioned the court to have the body-camera footage also released publicly.

"Let's be clear. This was an execution. Andrew Brown was in his driveway. The sheriff truck blocked him in his driveway so he could not exit his driveway," attorney Chantel Cherry-Lassiter said at a press conference outside the Pasquotank County Public Safety building. "Andrew had his hands on his steering wheel – he was not reaching for anything, he was not touching anything, he wasn't throwing anything around. He has his hands firmly on the steering wheel."

Cherry-Lassiter, who said she took three pages of notes as she watched the 20 seconds of body camera footage several times, said the video showed deputies had "numerous assault rifles at the scene," specifically identifying two types of weapons as the Bushmaster AR 223 and Glock 17 handguns.

"We watched this over and over and over to make sure we were sure about what was going on and what was transparent," the attorney continued, using her notes at times to recall what the video showed. "He finally tries to try to get away and he backs out – not going toward the officers at all. At no time in the 20 seconds that we saw was he threatening the officers in any kind of way."

She said she "lost count" how many shots were fired during the 20 seconds of video. According to Cherry-Lassiter, Brown attempted to avoid deputies as he backed out of the driveway, yet deputies continued to fire at him as he drove away and eventually crashed into a tree.

"They were still shooting at him after the car had already crashed into a tree," she said. "The car was riddled with bullets from them shooting at him when he was not threatening them in any kind of way."

It's unclear whether Brown was shot in the back, back of the head or elsewhere.

"We in Black America don't understand that when a Black person is going away from you, you think it's allowable to shoot them in the back and kill them," Ben Crump, a prominent civil rights attorney who recently secured the $27 million settlement in Minneapolis for George Floyd's family, said.

But when another attorney, Harry Daniels, was asked whether Brown was shot in the back, he responded, "Yes, back of the head," according to the Associated Press. Daniels also called for all the deputies involved to be immediately arrested.

"It's like we're against all odds in this world," Brown's adult son, Khalil Ferebee, also said at the press conference. "My dad got executed just by trying to save his own life. The officers were not in no harm of him at all. It's just messed up how this happened."

The attorneys representing Brown's family had blamed Cox for making the decision to show them only 20 seconds of body camera footage – despite Wooten wanting to give the family an opportunity to see more video of the fatal shooting. They also said Cox initially told the family they could not view the footage with their attorneys present.

"I want to highlight the disrespect to this family," Bakari Sellers, a CNN commentator and attorney representing Brown's family, said at the press conference. "I want to highlight the broken system of justice we have in this country. As we're going through this process, we told the families they would have their attorneys in there as some comfort… We went back and forth and I just want to say I've never been talked to like I was talked to in there."

"Mr. Cox told me, a grown Black man, that he was not f***ing going to be bullied," Sellers said. "So I walked out and I want you to know that the sheriff was very, very apologetic and diplomatic. The sheriff wanted to make sure that the family saw the video but it was the county attorney that gave us this back and forth."

The family and their attorneys entered the Pasquotank County Sheriff’s Office to be shown video of the shooting at about 1:30 p.m. ET – a two-hour delay from the time they were initially told. Cox said the delay happened to finish blurring faces and making redactions.

The attorneys have called for more footage to be shown to them from the other deputy body cameras, a post across the street and the sheriff van’s dash camera. Wooten has said that multiple deputies fired shots. Seven deputies are on leave pending a probe by the State Bureau of Investigation.

In a video statement, the sheriff said Monday that Cox had filed a request to have the video released, which in North Carolina must be authorized by a judge. He asked for patience while the State Bureau of Investigation probes the case.

"This tragic incident was quick and over in less than 30 seconds, and body cameras are shaky and sometimes hard to decipher. They only tell part of the story," he said.

Sellers also criticized officials who released the warrants against Brown and others who talked about his criminal record, arguing "They're going to say everything bad. They're going to call him everything but a child of God." Earlier Monday, a search warrant was released that indicated investigators had recorded Brown selling amounts of cocaine and methamphetamine to an informant.

Crump argued that authorities were trying to release negative information about Brown while shielding themselves by holding back the video. The search warrant was sought by Wooten’s office and signed by a judge to allow the search of Brown's Elizabeth City home.

It said that an investigator in nearby Dare County was told by the informant that the person had been purchasing different quantities of cocaine, "crack" cocaine, heroin and methamphetamine from Brown on numerous occasions for over a year. The informant described purchasing narcotics at the house in Elizabeth City that was the target of the search.

In March, narcotics officers used the informant to conduct controlled purchases of methamphetamine and cocaine from Brown on two separate occasions, according to the warrant, which said both drug transactions were recorded using audio and video equipment.

The search warrant said investigators believed Brown was storing drugs in the home or two vehicles. The document, which indicated the search was not completed, did not list anything found.

Two arrest warrants released last week charged him with possession with intent to sell and deliver three grams of each of the drugs.