A hiker in Alaska buried upside down in an avalanche for more than an hour was dug out alive on Saturday after another hiker spotted his legs sticking out of the snow.

The avalanche occurred on Flattop Mountain around 1 p.m. a slab of frozen debris 2 to 3 feet thick got dislodged and fell down the slope amid strong winds, the Chugach National Forest Avalanche Information Center reported in a news release.

Alex Kuprienko, of Anchorage, said he was hiking the mountain trail around 2:30 p.m. when he noticed two feet kicking out from the fresh avalanche debris. 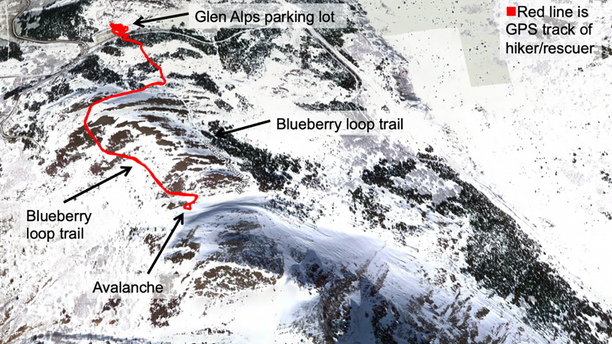 "Honestly, at first I thought it was a kid playing around in the snow, didn't think much of it," Kuprienko told KTUU-TV, adding that because no other people were there, he decided to look closer. "I went up, and sure enough, there was a guy buried in the snow with his legs sticking up. So, he was on his back, face-up, but obviously head-down into the snow."

The avalanche had pinned the hiker under the large blocks of debris, making it impossible to free himself. Kuprienko said he wasted no time, foregoing gloves, and started to dig through the snow with his bare hands. He was able to free the man in about five minutes, he said. 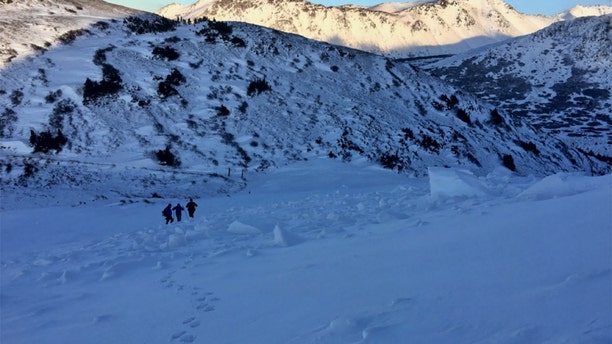 The hiker was fully buried, but had been able to kick his feet out from the snow. (Chugach National Forest Avalanche Information Center)

The trapped hiker, who was not named, showed signs of hypothermia but was conscious, the avalanche center announced. Kuprienko said he called 911 and helped the man to the parking lot below the trail, where medics were waiting.

"Obviously, this is a miracle that he was able to breathe for that long," Kuprienko told the Anchorage Daily News of the hiker being trapped for over an hour.

The avalanche reportedly fell in large blocks, which allowed air pockets to form within the debris. The victim’s head was 2 to 3 inches below the ice and snow, rescuers said, and he likely was able to breathe because he was near a pocket of air.

"It's unbelievably lucky," Wendy Wagner, director of the avalanche center, told the paper.

"It's really rare that someone has a positive outcome after being trapped under the snow for over an hour."