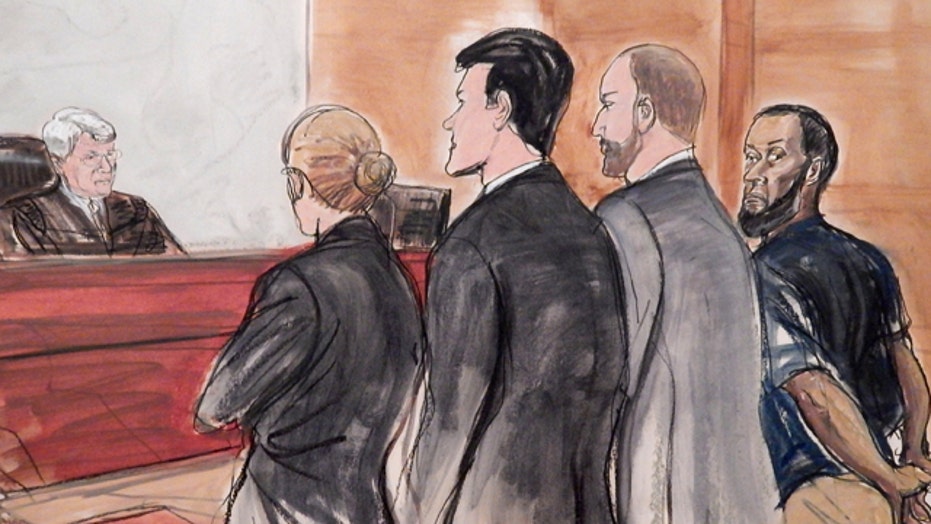 NEW YORK – A U.S. Air Force veteran and airplane mechanic accused of plotting to travel to Syria to join the Islamic State group will plead not guilty to terrorism charges, his attorney said.

Tairod Nathan Webster Pugh, of Neptune, New Jersey, was indicted on charges of attempting to provide material support to a terrorist group and obstructing justice, federal prosecutors announced Tuesday. He is due in federal court in Brooklyn on Wednesday.

Prosecutors said Pugh had been stopped at a Turkish airport in January carrying a laptop with information on Turkey-Syria border crossing points, 180 jihadist propaganda videos including footage of an Islamic State prisoner beheading, and a letter declaring: "I will use the talents and skills given to me by Allah to establish and defend the Islamic States."

"There is only two possible outcomes for me. Victory or martyr," continued the letter, which authorities believe was to Pugh's Egyptian wife, investigators said in court papers.

The Department of Justice has charged roughly 20 people in the past year with planning to travel to the Middle East to fight alongside militants such as the Islamic State group, which controls parts of Syria and Iraq. Federal officials have been concerned about Americans going overseas to train with these groups and returning with plots to carry out attacks at home.

The 47-year-old Pugh served in the Air Force from 1986 to 1990 and was trained in installing and maintaining aircraft engines and navigation and weapons systems, according to Brooklyn U.S. Attorney Loretta Lynch's office. An airman first class, Pugh was assigned to the Woodbridge Air Base in England in July 1987 and Davis-Monthan Air Force Base in Arizona in July 1989, the Air Force said.

After leaving the Air Force, he worked as an avionics specialist and airplane mechanic for a number of companies in the Middle East and the U.S. — including American Airlines, where the FBI got a 2001 tip about him from a co-worker who said Pugh expressed sympathy for Osama bin Laden, according to court papers. The airline said he left in early 2000 after a few months at American.

In 2002, an associate of Pugh's told the FBI that Pugh was interested in traveling to Chechnya to wage war, the investigators' court filing said.

Pugh worked on for DynCorp International in Iraq as an Army contractor in 2009 and 2010, the filing said. McLean, Virginia-based DynCorp declined to comment.

Pugh has been living overseas for the past year and a half, most recently in Egypt, investigators said. Last summer, Kuwait-based charter airline Gryphon Airlines considered hiring Pugh for a project but decided he didn't meet the requirements, the company said in a statement. He told an acquaintance in a December email that he'd been fired from his most recent job, according to investigators.

Prosecutors said Pugh then decided to join the Islamic State group, traveling from Egypt to Turkey to ultimately cross the border into Syria. He was stopped at the Turkish border Jan. 10, turned away and returned to Egypt, where he was detained in order to be returned to the U.S.

Pugh variously told authorities in Turkey and Egypt that he had gone to Turkey for vacation and to look for a job, and he said had no desire to go to Syria, court papers said.

But investigators said they found a chart of crossing points between Turkey and Syria, plus information about whether the border checkpoints were staffed, on Pugh's laptop. Investigators said his cellphone also had photos of a machine gun and airplanes, including an airplane bathroom and an area under passenger seats.