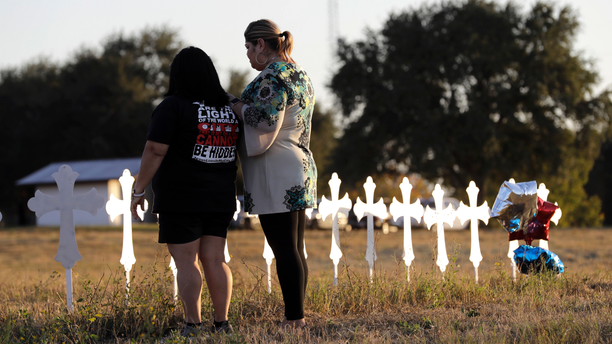 The lapse prompted the Pentagon to announce a review of whether the problem has gone undetected in other cases across the military.

Devin Patrick Kelley was convicted of assault against his wife and stepson in an Air Force court-martial in New Mexico in 2012 and served 12 months in confinement before being given a bad-conduct discharge in 2014.

He is the suspected gunman in the attack Sunday in Sutherland Springs, Texas, in which 26 people were killed.

An Air Force record of the Kelley court-martial says he pleaded guilty to multiple specifications of assault, including striking his wife, choking her with his hands and kicking her. He also was convicted of striking his stepson on the head and body "with a force likely to produce death or grievous bodily harm."

Under Pentagon rules, information about convictions of military personnel in crimes like assault is supposed to be submitted to the FBI's Criminal Justice Investigation Services Division for inclusion in the National Criminal Information Center database.

For unspecified reasons, the Air Force did not provide the information about Kelley as required.

Acknowledging its mistake, the Air Force said in a written statement that the top two Air Force officials — Air Force Secretary Heather Wilson and Chief of Staff Gen. David Goldfein — have ordered a review of the Kelley case by the Air Force Office of the Inspector General.

"The service will also conduct a comprehensive review of Air Force databases to ensure records in other cases have been reported correctly," Air Force spokeswoman Ann Stefanek said.

Later Monday, the Pentagon issued a written statement saying it had asked its inspector general to work with the Air Force to review the handling of criminal records in the Kelley case. It also said the inspector general will "review relevant policies and procedures to ensure records from other cases" throughout the Defense Department have been correctly reported to the FBI.