The Chicago community and family members of 13-year-old Adam Toledo are reeling after the release of police footage and other materials related to the March shooting of the boy, who was fatally wounded by an officer responding to a report of shots fired in the area.

Toledo's family asked the public for peace in a statement released through attorneys on Friday, just one day after Chicago's Civilian Office of Police Accountability (COPA) released several videos, 911 calls and information connected with the March 29 shooting.

"We understand that emotions in the community are running high," the statement reads. "The Toledo family implores everyone who gathers in Adam's name to remain peaceful, respectful and nonviolent and to continue to work constructively and tirelessly for reform."

A demonstration was planned for Friday in Chicago to call for "Justice for Adam Toledo," after small groups of protesters gathered at a police station and marched downtown Thursday night. Some downtown businesses boarded up their windows in the expectation there could be unrest, though the Thursday protest was peaceful.

Adam's mother previously described him as a curious and goofy seventh-grader who loved animals, riding his bike and junk food. The Toledo family issued a new statement on Thursday urging people to avoid violent protests.

"We pray that for the sake of our city, people remain peaceful to honor Adam’s memory and work constructively to promote reform," the family said on Thursday.

Activist Ja'Mal Green reacts as he walks towards a line of police officers outside Chicago police headquarters during a rally after the body camera video release of fatal police shooting of 13-year-old Adam Toledo on Thursday, April 15, 2021. (AP Photo/Shafkat Anowar)

"The community is outraged and the family is in pain over what we now know was an unnecessary taking of their loved one’s life," said Maggie Rivera, who heads the Illinois chapter of the League of United Latin American Citizens, which called for Stillman to be fired. "... This video clearly shows Adam was not a threat to the officer at that very moment when the trigger was pulled. Communities of color in Chicago are tired of the aggressiveness of some law enforcement officers and you can see it firsthand in this video."

Extremely graphic police body camera footage shows a Chicago police officer, identified as Eric Stillman, pulling up to the location and immediately encountering two people, one of whom appears to be Toledo, running away from the area.

Video released by Chicago' Civilian Office of Police Accountability shows Toledo in the moments before he was fatally shot. (Chicago COPA)

Stillman’s footage shows him forcing the other person, identified by officials as 21-year-old Ruben Roman, to the ground before continuing behind Toledo, who is seen running away from the crime scene wearing a baseball cap, a dark-colored hoodie and jeans. According to prosecutors, FOX 32 reported, it was Roman who fired the shots that prompted police to respond to the area.

The officer can be heard telling the boy to "stop" and "stop right f------ now." Toledo then stops for a moment before he turns toward the officer, at which point the cop tells him to, "Show me your f------ hand."

Footage from a surveillance camera provides a different perspective of the police chase, with Toledo appearing to reach behind the fence. The footage later shows a gun on the ground alongside the fence, feet from where Toledo was shot.

Chicago police have also released a video and audio compilation of the shooting, providing additional details about the circumstances.

According to the video footage, Toledo appears to have his hands up when he is shot one time in the chest. Officers on scene performed chest compressions while they waited for an ambulance to arrive. He could not be saved.

Nineteen seconds elapsed from when Stillman got out of his squad car to when he allegedly shot Toledo. His bodycam footage shows him chasing Toledo on foot down an alley.

There have been conflicting reports as to whether or not Toledo had a gun in his hand at the moment he was shot.

The Chicago Police Department typically doesn't release the names of officers involved in such shootings this early in an investigation, but Stillman's name, age and race — he's 34 and White — were listed in the investigation reports released Thursday. Three sources familiar with the matter told Fox News Stillman is a Marine veteran.

Adeena Weiss-Ortiz, an attorney for Toledo’s family, told reporters the bodycam footage and other videos "speak for themselves." She said it's irrelevant whether Toledo was holding a gun before he turned toward the officer.

"If he had a gun, he tossed it," she said. "The officer said, 'Show me your hands.' He complied. He turned around."

Weiss-Ortiz said that she looked into Stillman's record but found no prior disciplinary issues. 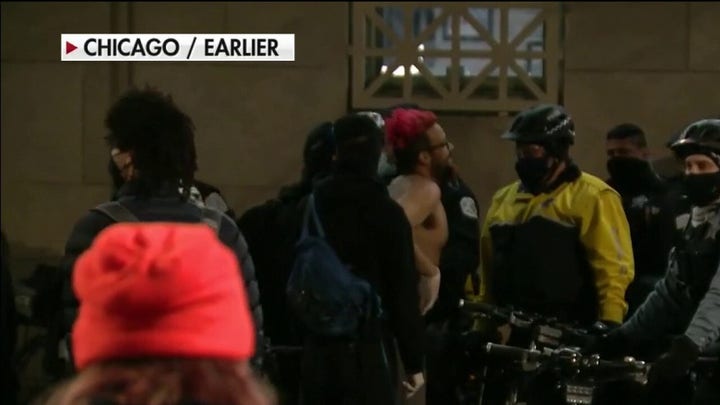 The gun found at the scene matched the spent cartridge casings that were found in the area where Roman was firing, FOX 32 reported, citing prosecutors.

He was charged with reckless discharge of a firearm, unlawful use of a weapon by a felon and felony endangerment of a child, according to the affiliate report.

Video released by police also shows the events earlier in the morning of March 29 – two people, who look to be wearing the same clothes as Toledo and Roman, standing on a sidewalk roughly a block away from where the teenager was shot as one of them appears to allegedly fire several gunshots. A different clip shows them running from the area.

The release Thursday of the footage and other investigation materials in the shooting of Toledo, who was Latino, by a White police officer came at a sensitive time, with the ongoing trial in Minneapolis of former Officer Derek Chauvin in the death of George Floyd, and the recent police killing of another Black man, Daunte Wright, in one of that city's suburbs.

Before COPA posted the material on its website, Mayor Lori Lightfoot called on the public to keep the peace.

"We live in a city that is traumatized by a long history of police violence and misconduct," Lightfoot said. "So while we don’t have enough information to be the judge and jury of this particular situation, it is certainly understandable why so many of our residents are feeling that all too familiar surge of outrage and pain. It is even clearer that trust between our community and law enforcement is far from healed and remains badly broken."