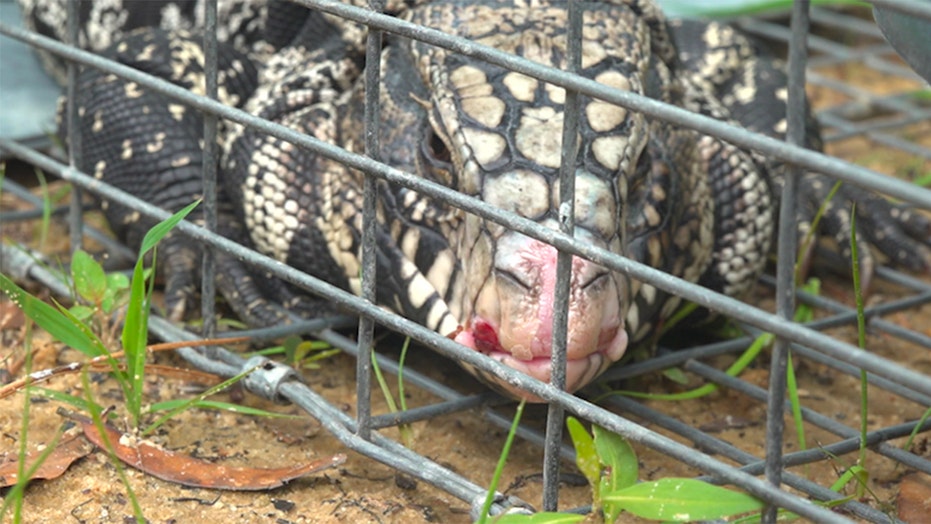 Southern wildlife in jeopardy as tegu lizards continue to prowl

Georgia and Florida officials are working to stop the Argentine black and white tegu lizard from spreading. The lizards can grow up to 4 feet long and will eat anything they can put in their mouth, especially eggs.

REIDSVILLE, Ga. -- An invasive, giant, and dangerous lizard is creeping its way through southeast Georgia and beyond.

The Argentine black and white tegu lizards are originally from South America, and now they are wreaking havoc on wildlife throughout the South.

Daniel Sollengberge, senior wildlife biologist with the Georgia wildlife, said they never knew there was a population established in the wild until recently.

Tegu lizards are known to eat anything that they want, especially the eggs of other reptiles.

“We presume that the animals started as the result of escaped or released pets in the area... there really common in the pet trade,” Sollengberger said.

After over a dozen sightings of the lizards in southeast Georgia, Tegus have become known as an invasive species particularly in Toombs and Tattnall counties.

Map showing the two southeastern counties that have been invaded by Tegu lizards.

The lizards can grow up to four feet long. As the number of lizards in southeast Georgia continue to increase, the geological survey team is racing to put down traps.

The traps are placed about 100 meters apart and members of the Geological team check them daily.

One trap in southeast Georgia that is set up to capture Tegu lizards.

Daniel Haro is a part of the geological team and works in the field about three to four times a week. “In general, right now, we have 85 and we’re going to get to 90... so, this week I’m hoping to place five more,” Haro said.

According to Georgia wildlife, the lizards don’t attack people unless provoked. However, with their strong jaws and sharp teeth, they will eat anything they can put in their mouth, especially eggs.

Crews hold Tegu lizards that was captured years ago.

“Whereby they’re damaging our gopher tortoise populations or bobwhite quail populations or turkey populations…the animal walks around and it hunts up nests on the ground,” Mcbrayer said.

On top of that, tegu lizards can lay up to 40 eggs, and once they hatch, they will be around 6 to 10 inches long.  “That’s our real concern... that there could be a very rapid increase in the number of tegus in just a few years,” Mcbrayer said.

The crew in southeast Georgia has not caught a juvenile tegu yet but, “all the habitat and the size of the animals we’re catching suggest that they’re reproducing – so that’s a problem,” Mcbrayer said.

Tegu lizards have established themselves as invasive species in Florida, too. “There’s at least three populations in Florida... the north side of the Everglades…one inland in St. Pete from Tampa … and now one in the Panhandle,” Mcbrayer said.

Map shows areas in Florida that have been impacted by Tegu lizards.

The population of lizards in the South could spread rapidly because, unlike most lizards, Tegus move around.

“These animals can walk several miles in a day. They could walk 10 or 12vmiles just in a day or two,” Mcbrayer said.

As the population of lizards continues to grow, Mcbrayer says the lizards will spread quickly if they aren’t stopped.

“These animals can be trapped or hunted humanely in safely," Mcbrayer said. "We encourage anyone to do that to remove these animals from the wild.”