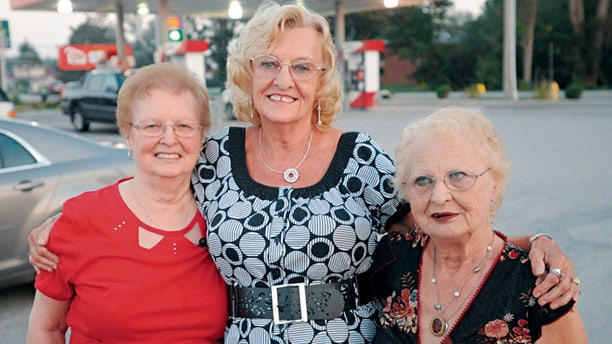 In this Sept. 10, 2013 photo, three sisters, from left, Shirley Mortellaro, 78, Mary Kidwell, 77, and Joan Billings, 80 are reunited in Batavia, N.Y., 73 years after their mother abandoned the older two in Toronto and disappeared with Mary. (AP/The Daily News)

Three sisters have been reunited in western New York some 73 years after their mother abandoned the older two and disappeared with the youngest sister.

The Daily News of Batavia reported Saturday that the sisters — 80-year-old Joan Billings, 78-year-old Shirley Mortellaro and 77-year-old Mary Kidwell — were reunited this month after decades of searching for each other.

The sisters' story begins in 1940 in Toronto, where their father was in the Canadian Air Force.

The sisters told the newspaper that when their father was away, their mother would put them in the bedroom and tell them to stay there while she went partying.

One day, the sisters said, they caught their mother with a boyfriend and told their father. A fight ensued and the mother packed quickly and left with her youngest daughter.

The two older sisters settled in western New York — Billings in Albion and Mortellaro in  — Pembroke while Kidwell ended up in Columbus, Ohio.

Billings and Mortellaro both married, Billings twice. Billings has six surviving children, having lost a daughter at age 33. Mortellaro and her husband Tony have three daughters; Kidwell, who is widowed, has four children.

The two older sisters spent years looking for Mary, and she looked for them as well.

That search ended about three weeks ago when Mortellaro got a call from her grandson's girlfriend's mother in Florida, who had taken up the search.

Kidwell arrived in Batavia by bus on Sept. 10. The sisters had no trouble recognizing each other.

"We've lost a lot of years and we can't get them back," Kidwell said, as she sat in with her sisters in Mortellaro's living room. "We've got a lot of catching up to do."