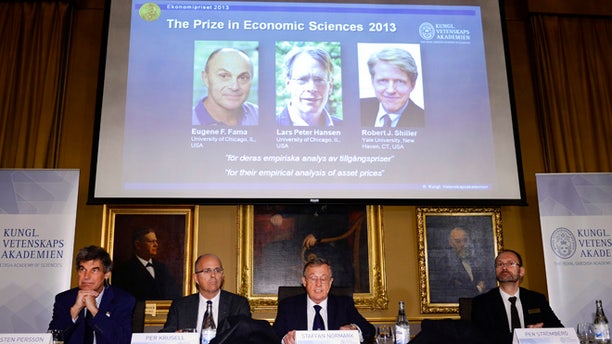 The Royal Swedish Academy of Sciences said that through their separate research, the three had laid the foundation of the current understanding of asset prices.

While it's hard to predict whether stock or bond prices will go up or down in the short term, it's possible to foresee movements over periods of three years or longer, the academy said.

"These findings, which might seem surprising and contradictory, were made and analyzed by this year's laureates," the academy said.

Fama, 74, and Hansen, 60, are associated with the University of Chicago. Shiller, 67, is a professor at Yale University.

Shiller, an economist famous for having warned against bubbles in technology stocks and housing, said he reacted with "disbelief" when he received the telephone call from the academy early Monday.

"A lot of people have told me they hoped I would win it, but I'm aware there are so many other worthy people that I had discounted it, so I would say no, I did not expect it," he told reporters in Stockholm by telephone.

Starting in the 1960s, Fama and others showed how difficult it is to predict stock prices in the short run, findings which changed market practice, for example with the emergence of index funds, the academy said.

Two decades later, Shiller showed that there is more predictability in the long run in stock and bond markets, while Hansen developed a statistical method to test theories of asset pricing.

"These are three very different kinds of people and the thing that unites them all is asset pricing," says David Warsh, who tracks academic economists on his Economic Principals blog.

American researchers have dominated the economics awards in recent years; the last time there was no American among the winners was in 1999.

The Nobel committees have now announced all six of the annual $1.2 million awards for 2013.

The economics award is not a Nobel Prize in the same sense as the medicine, chemistry, physics, literature and peace prizes, which were created by Swedish industrialist Alfred Nobel in 1895. Sweden's central bank added the economics prize in 1968 as a memorial to Nobel.

This year's Nobel science prizes awarded ground-breaking research on how molecules move around inside a cell, particle physics and computer modeling of chemical reactions. Canadian short-story writer Alice Munro won the Nobel Prize in literature and the Organization for the Prohibition of Chemical Weapons was awarded the Nobel Peace Prize.

All awards will be presented to the winners amid royal pageantry on Dec. 10, the anniversary of Nobel's death in 1896.