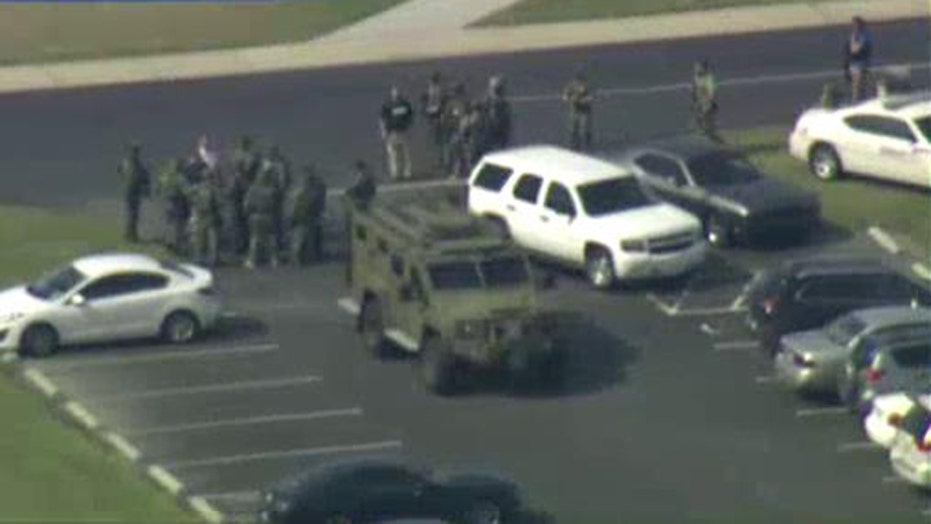 Authorities were searching for a person of interest Monday after a North Carolina community college employee was shot and killed on campus.

Wayne Community College, in Goldsboro, was placed on lockdown after the shooting.

Maj. Tom Effler of the Wayne County Sheriff’s Office announced that Kenneth Stancil -- a bald, white male with a tattoo over his left eye -- is considered a person of interest. Stancil was last seen wearing a blue shirt and light-colored pants, and is no longer on campus.

Stancil is or at one point was a student at the college, the Goldsboro News-Argus reports.

"There has been one fatality, and there is one shooter," said Kim Best, spokeswoman for the city of Goldsboro.

Authorities identified the victim as Ron Lane, a long-time employee who worked in the print shop in the college.

Best said the two men knew each other, but authorities have not released a motive for the shooting. Authorities believe Stancil shot Lane with a rifle.

A SWAT team and officers arrived on scene Monday morning to respond to a report of a shooting in the Wayne Learning Center -- a building that houses the school’s library and cafeteria.

“This is not a drill. The entire campus is under lockdown,” read a message posted on the school’s website.

First-year student Jovaun Williams, 24, was climbing the staircase inside building, and had almost reached the second floor when he heard a single muffled pop.

It took a minute, he said, for him to recognize the sound was that of a gunshot similar to the kind he heard growing up in a tough neighborhood near Long Beach, California. He didn't know where it came from.

"You hear a shot and my biggest things is, get out of there," he said. "It definitely wasn't where I was at, so that was good enough for me."

By the time he walked back downstairs, he saw police officers running into the building with their guns drawn.

First-year Student Joniece Simmons, 19, said she was sitting on a bench outside the learning center building when two officers with rifles and a third with a drawn handgun ran toward the building, shouting for students to take cover in a safe place. She and others ran inside to the cafeteria and locked the door.

Though they were urged to stay silent, some students still wanted to talk. "I was like 'hush, it's serious.' I was crying," Simmons said.

The school has a student population of 3,837 and is staffed by 496 faculty members.

Pictures posted on social media showed students being led out of buildings with their hands up. Albertson said all school personnel have been evacuated.

All classes and activities at the college were canceled for the rest of the day.

Tommy’s Road Elementary School, which is near the community college, was placed on lockdown after the shooting, WRAL reports. Students of Wayne Early Middle College, located on the campus of Wayne Community College, were told not to go to classes.

The private Wayne County Day School, which houses around 300 students -- was also placed on lockdown.

"We saw 10 to 11 cruisers go by all at once," Melissa Watkins, a volunteer parent receptionist at the school, told The Associated Press. "We knew something was going on; we just didn't know what or where."