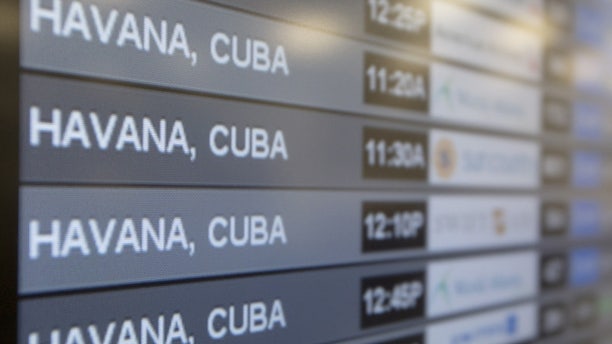 The U.S. Department of Transportation opened bidding by American air carriers on as many as 110 U.S.-Cuba flights a day.

The United States and Cuba on Tuesday signed a deal restoring commercial air traffic for the first time in five decades, allowing of dozens of new daily flights to bring hundreds of thousands more American travelers a year to the island as early as this fall.

Immediately after the signing, the U.S. Department of Transportation opened bidding by American air carriers on as many as 110 U.S.-Cuba flights a day - more than five times the current number. All flights operating between the two countries today are charters.

Barring other major announcements, the restart of commercial flights will be the most significant development in U.S.-Cuba trade since Presidents Barack Obama and Raul Castro announced in late 2014 that they would begin normalizing ties after a half-century of Cold War opposition. The Obama administration is eager to make rapid progress on building trade and diplomatic ties with Cuba before the president leaves office. The coming weeks are seen as particularly crucial to building momentum ahead of a trip he hopes to make to Havana by the end of March.

"Today is a historic day in the relationship between Cuba and the U.S.," U.S. Transportation Secretary Anthony Foxx said after he and Transportation Minister Adel Yzquierdo Rodriguez signed the deal in a ceremony at Havana's Hotel Nacional. "It represents a critically important milestone in the U.S. effort to engage with Cuba."

The U.S. Department of Transportation expects to award the new routes by the summer. The winning airlines then must negotiate their own deals with Cuba.

Yzquierdo declined an interview request but Foxx said after meeting with the Cuban minister that he believed Cuba was eager to restore commercial air service as quickly as possible.

"Every indication I have in the conversations we've had today is that the Cubans want to move as fast as we're able to move," Foxx said. "People will actually be able to go buy a ticket and fly to Cuba on a commercial airline. That's a pretty big step. We haven't been able to do that in 50 years."

The agreement allows 20 regular daily U.S. flights to Havana, in addition to the current 10-15 charter flights a day. The rest would be to other Cuban cities.

"The adoption of this memorandum is an important step that will soon permit the establishment of regular flights between the United States and Cuba," Yzquierdo Rodriguez at the signing ceremony.

Commercial flights make travel to Cuba far easier for U.S. travelers, with features such as online booking and 24-hour customer service that are largely absent in the charter industry.

U.S. visitors to Cuba will still have to qualify under one of the travel categories legally authorized by the U.S. government. Tourism is still barred by law, but the number of legal reasons to go to Cuba — from organizing professional meetings to distributing information to Cubans — has grown so large and loosely enforced that the distinction from tourism has blurred significantly.

Commercial travel will give travelers the ability to simply check an online box on a long list of authorized categories.

The deal does not contemplate flights by Cuba's national airline to the United States, where lawyers for families and businesses that have sued Havana over decades-old property confiscations are eager to freeze any of its assets that they can get their hands on.

American Airlines spokesman Matt Miller said the company plans to bid on routes from Miami and other unspecified "American hubs."

"We applaud the Administration for making commercial air service a priority," American chairman Doug Parker said in a written statement. "American looks forward to submitting a Cuba service proposal to the Department of Transportation in the coming weeks."

United Airlines is also looking to serve Havana from some of its hubs, spokesman Luke Punzenberger said. The carrier's major hubs include Chicago, Houston, Washington and Newark, New Jersey. It currently does not fly charters to Cuba.

JetBlue Airways said it was eager to offer service between "multiple" cities in the United States and the island, with spokesman Doug McGraw saying that "interest in Cuba has reached levels not seen for a generation."