Theme park of giant president heads was a bust 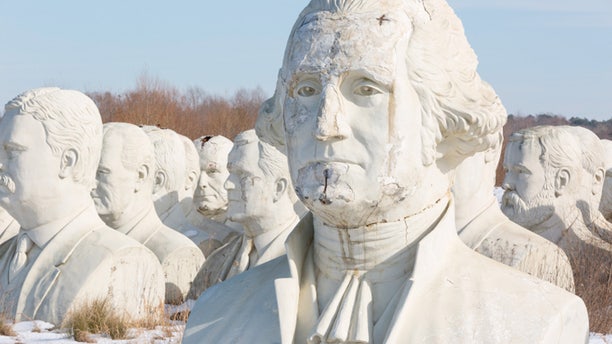 Some 150 miles south of Washington, DC on a patch of farmland in Croaker, Virginia, stands 43 giant heads of United States presidents.

This is one giant bust of a presidential theme park.

Some 150 miles south of Washington, DC on a patch of farmland in Croaker, Virginia, stands 43 giant heads of United States presidents.

The busts — 20-feet tall and weighing between 11,000 and 20,000 pounds each–were the brainchild of Houston artist David Adickes, who commissioned the works for his President’s Park, across from Water Country USA in Williamsburg.

The tourist attraction opened in 2004 but was never a hit and operators called it quits in 2010 when they didn’t even have enough money, about $60,000, to create a 44th bust of President Obama.

Howard Hankins, who runs a nearby concrete recycling business, was originally contacted to get rid of the 43 giant heads.

But Hankins loved them so much, he never destroyed them — and instead parked them on his farm.

But the farm is private property, and not open to the public.

Virginia historians hope to one day make the busts more available to the public.

Time has not been kind to the artworks, with weather — President Reagan was damaged in a lightning strike — and inconsiderate birds the evil-“poo”-ers-in chief.