Some major cities are so intrinsically linked with their beaches that a traveler wouldn’t dare plan a vacation there without setting aside some major time to hit the sand and soak up some rays. But these aren’t the only urban hubs with a scenic stretch of sand to call their own.

From Chicago to Mumbai, Stockholm to Hong Kong, some of the world’s biggest cities are blessed with shockingly accessible beaches, often only a short ride from downtown on public transportation. And we’re not talking about some underwhelming patch of sand hidden in a maze of urban sprawl. These are authentic beach hangouts with gorgeous views that feel like they’re worlds apart from the hustle and bustle that’s often only a few blocks away.

So what makes an urban beach a surprise? Some towns made it onto the list because of their geography. Who but a local would know that a city like Vancouver, that hosted the 2010 Winter Olympics, also has a thriving beach scene? Or that Cape Town, which regularly sees penguins in its waters, attracts its fair share of sunbathers? Others, like Montevideo, Uruguay, seem to simply get overshadowed by their bigger, more famous neighbors. And finally, in places like Hong Kong or Mumbai, the beaches can often get lost in the shuffle of everything else the major metropolis has to offer.

With beaches this accessible, there’s no excuse not to grab your sunscreen and hit the sand. 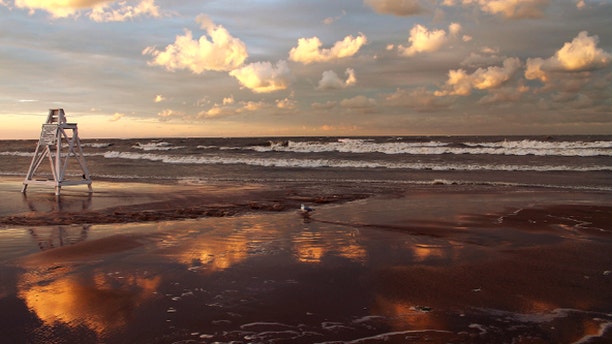 Until you’ve seen Chicago’s waterfront with your own eyes, it’s impossible to imagine just how gorgeous a beach can be in the middle of the Midwest. But they don’t call Lake Michigan a “Great” Lake for nothing. If you didn’t know any better, you’d be forgiven for thinking this is the ocean, with 26 miles of beaches to show for it. Located in Lincoln Park, Montrose Beach is the largest in the city, with a portion set aside as Chicago’s first off-leash dog beach. Though you’re only minutes from downtown, you’ll find a surprisingly diverse array of wildlife here, including migrating shorebirds, snowy owls and thousands of purple martins in the native dune ecosystem on the beach’s far east end. In addition to bird watching, Montrose is a great place to kite board and surf—yes, you can even catch a major wave on America’s Third Coast!
cpdbeaches.com 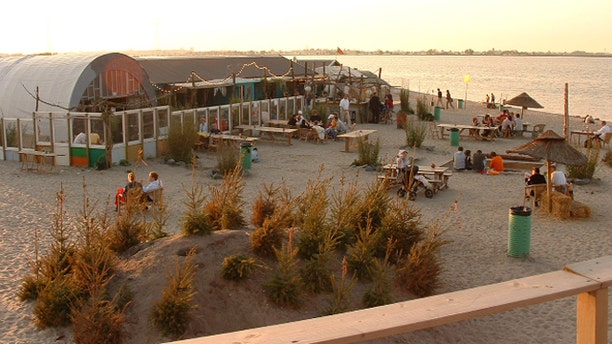 Called the “Venice of the North,” Amsterdam boasts 165 canals, so water is a constant presence in the lives of locals. But in the hip new suburb of IJburg, built on a series of artificial islands just east of the city, you’ll have a completely different waterfront experience. Instead of canals, the neighborhood overlooks the IJmeer, a wide lake leading out to the open sea. Accessible by tram or bike, the neighborhood is home to Blijburg aan Zee, a popular artificial swimming beach opened in 2003. The beach has become something of a scene with DJ sets throughout the summer, art exhibitions, sand castle-building contests, and drinking around the campfire. Best of all, unlike the artificial beaches that crop up during the summer in places like Paris, Berlin and London, this 820-foot-long stretch of sand feels like a “real” beach instead of an urban consolation prize.
blijburg.nl 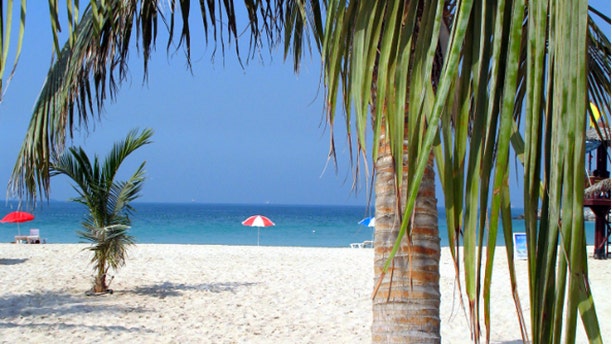 Thanks to a traditional Muslim culture, the conservative United Arab Emirates may not scream top beach destination. But if you take a few small steps to respect the local customs here, you’ll be welcomed with open arms at Dubai’s many gorgeous beaches. Modesty is the name of the game here, so you’ll want to leave behind your skimpy bathing suit in favor of a more modest t-shirt and shorts or bring along a shawl for covering bare shoulders. Located on a calm creek separating Dubai from the emirate of Sharjah, Al Mamzar Beach Park is a 262-acre oasis of white sand and palm trees on the Persian Gulf, with five separate beaches, swimming pools, barbecues, green spaces and rentable bikes to get you around between them. Be warned that Wednesdays are reserved for women and children. 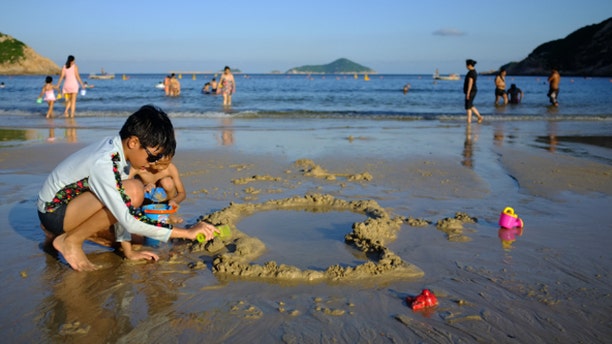 You might imagine Hong Kong as a chaotic jungle of glass and steel skyscrapers. And while this city of 7 million residents certainly has a hectic side, there’s a surprisingly diverse array of natural landscapes—from hidden beach coves to massive peaks—on Hong Kong’s mainland peninsula and 263 islands. But you don’t have to flee to its farthest reaches to find an amazingly authentic beach. Reachable by public minibus, Shek O Beach is only about 10 miles from the city’s downtown business district, right on the southeast corner of Hong Kong Island (their answer to Manhattan). Unlike other island beaches, which have become overrun with tourists and luxury high-rises, Shek O still feels like a village, albeit quite a luxurious one. The crescent-shaped, golden-sand beach is backed by shade trees and rocky headlands that gave this area its name—the odd sounding Shek O is actually Cantonese for “rocky bay.” 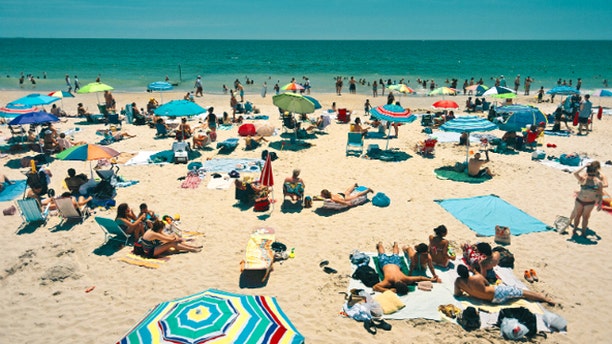 Long beloved by New Yorkers as an easily accessible escape from the urban grind (just take the A train!), funky Rockaway Beach is just one stretch of the nearly 14 miles of beaches run by the New York City Department of Parks & Recreation. Beyond the five boroughs, however, many Americans may not have even known about New York’s beaches until they were thrust into the national spotlight by Superstorm Sandy. It all but destroyed Rockaway’s boardwalk and the surrounding neighborhood in October 2012. But locals weren’t going to let their favorite beach hangout go without a fight: After $140 million in cleanup and reconstruction, the “Irish Riviera” is still very much a work in progress, but much of the beach was reopened for business by Memorial Day 2013. Located on a thin peninsula in Queens, Rockaway is the only official surfing beach in the city and has recently attracted crowds of hipsters and foodies, thanks to newfangled concessions like Rockaway Tacos and Veggie Island. nycgovparks.org 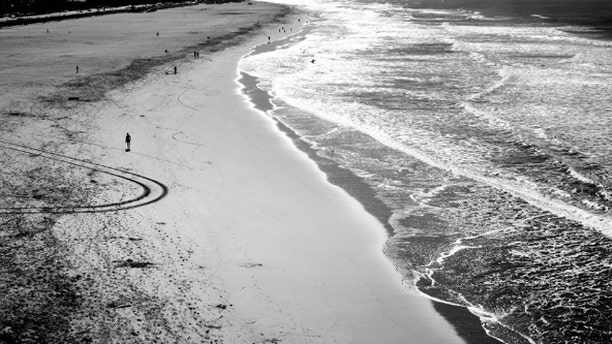 With SoCal standouts like Venice Beach and Santa Monica grabbing all the attention, it can be easy to forget that San Francisco boasts its own slate of urban beaches, easily accessible from many of the peninsula’s residential neighborhoods. Part of the Golden Gate National Recreation Area, Ocean Beach offers 3.5 miles of sand running along the edge of Golden Gate Park, perfect for flying kites or watching shorebirds, such as the threatened snowy plover. The beach remains shrouded in fog for much of the late spring and summer, but fall often brings with it warmer, sunnier days. Even when the sun’s shining, however, the waters offshore remain remarkably cold with dangerous currents and massive waves that are not to be trifled with unless you’re an experienced surfer. Instead, you’re better off spending time with friends around a bonfire at one of the newly installed fire rings.

More from The Active Times: