An annoyed passenger was kicked off a Delta Air Lines flight earlier this month after “screaming” about being seated next to an 8-month-old, according to the baby’s mother.

Marissa Rundell, a mom from Hammondsport, N.Y., was seated with her son Mason on a flight scheduled to depart from JFK International Airport for Syracuse on Feb. 6, when a woman preparing to take her seat across the aisle began complaining, Rundell told the Daily Mail.

"She came to the back and slammed her bags down. She said 'this is f---ing ridiculous. It's bulls--- having to sit in the back of the plane,'” said Rundell.

Rundell claims she then asked the woman to watch her language — twice — and was told to "shut the f--- up and shove it."

The woman then began complaining about being seated next to a "crying baby" on the plane, although Mason was not crying at the time, says Rundell.

“Can I sit somewhere else?” the woman can be heard saying in footage Rundell shared to Facebook. “I’m not sitting near a crying baby.”

Soon afterward, an attendant on the flight — which was operated by Endeavor Air, a wholly-owned subsidiary of Delta — tells the woman she can take the next flight if she’d prefer. 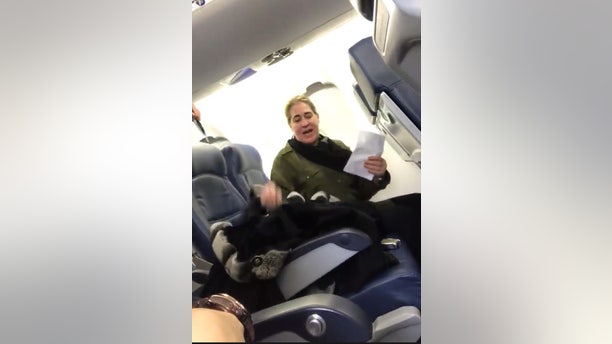 Rundell filmed the woman telling the flight attendant that she "may not have a job tomorrow." (Marissa Rundell)

She then asks for the flight attendant’s name, which the attendant — Tabitha — offers along with her employee ID number.

“Thank you, Tabitha,” the woman says. “You may not have a job tomorrow.”

At this, Tabitha immediately tells another crew member that she “want[s] this lady off the flight,” which prompts the woman to begin apologizing.

“No. You just screamed at a woman and her baby,” Tabitha responds. She then turns toward a responding crew member and motions toward the woman. “She was screaming at the baby,” Tabitha says.

“I’m not screaming. I’ll be quiet now. Please. OK? I’m sorry. I was really stressed out,” the woman can be seen pleading near the end of Rundell’s video. 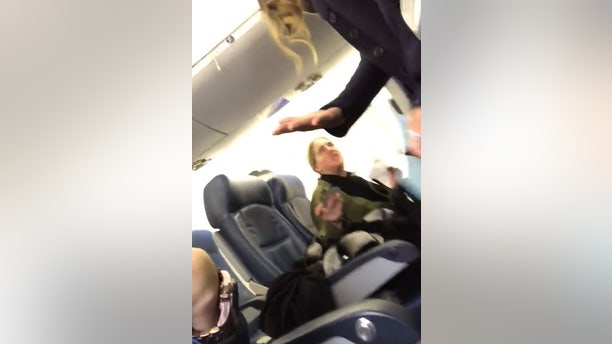 Rundell confirmed to the Daily Mail that the woman continued to argue with a gate agent who came to remove her from the flight, but ultimately left the plane after coming back to her seat and fetching her belongings.

"I thought it was funny how she was acting like a child throwing a tantrum,” said the 19-year-old mom.

In response to the incident, a spokesperson with Delta Air Lines has stated that the woman's behavior was not in keeping with the standards that the airline requests of its passengers or crew.

"We ask that customers embrace civility and respect one another when flying Delta," a Delta spokesperson told Fox News via email. "This customer’s behavior toward a fellow customer on a flight from New York to Syracuse was not in keeping with those standards. We appreciate our Endeavor Air flight attendant’s commitment to Delta’s core values and apologize to the other customers on board Flight 4017 who experienced the disturbance."

“This lady thought she was going to be rude to me and Mason, now she has no way home today,” Rundell wrote on Facebook. “Thank you to the lovely Delta flight attendant for not letting this women [sic] bully us."