New hotel rooms may not have a closet or desk 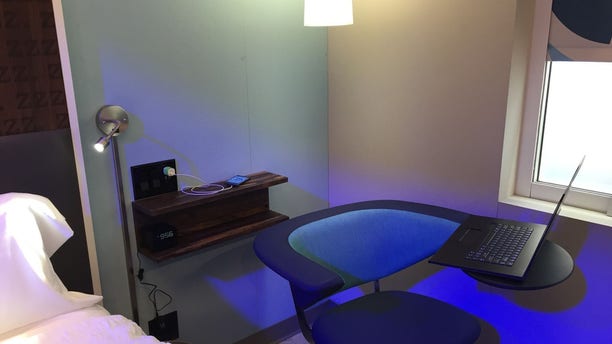 A prototype room of Hilton’s new Tru brand on display in Los Angeles. Instead of desks, rooms in the new hotels will feature chairs with large armrests to place a laptop. (Scott Mayerowitz)

Hotels are going for a new minimalist look to attract younger guests, but the move has left some experienced travelers angry, wondering how they're expected to get work done without a desk.

Younger travelers, hotels note, just want a clean and efficient space to stay. They spend less time in rooms and like to socialize and work in vibrant lobbies with a sense of community.

So carpets are being replaced by easy-to-clean laminate floors. Tubs are being ripped out in favor of glass showers. And instead of working at a desk, guests are increasingly expected to use glorified window sills or oversized TV trays.

If those "flexible workspaces" aren't conducive to creativity, hotels are hoping to nudge guests to bring their laptops to the lobby, where they might buy a glass of wine while typing away.

But for seasoned travelers who enjoy working in the quiet of their rooms this has caused major headaches.

"Flexible, I have no problem with. Unusable, is what I have a problem with," says Don Wright, 59, a computer consultant from Lexington, Kentucky.

Often, these surfaces aren't "bigger than a sheet of paper," he says, adding that a laptop might fit, but not also a binder full of documents.

Wright has spent up to 200 nights a year in hotels and understands that many make changes to cater to younger travelers. But he can't imagine any millennial deciding not to stay in a hotel because the room has a desk. But for older road warriors, a lack of a desk is a deal breaker.

"When you are 25 all is well and you can roll up in a ball and sit anywhere," Wright says. "But when you turn 45, 50 or older, your body doesn't like those types of positons."

It's such a concern that frequent traveler forums online list desk-less hotels to avoid.

Charles Kron, a 51-year-old insurance company training consultant from Atlanta, criticized Marriott in one such discussion for "moving away from being a business hotel chain."

On one trip, he used the ironing board as a desk.

Heading to the lobby isn't a solution.

"We can go too far if we say no work surface is the approach," Sorenson says. "That's not what we are doing. Increasingly, we settle in a place where there is a desk. It's a smaller desk. It might sometimes be a flexible space."

Take the bathroom. Historically, it was a small space with a door that swung in. By swapping the tub for a shower and converting the door to slide into the wall, the space feels larger.

"People expect a better bath experience than they expected 25 or 30 years ago," Sorenson says. The redesigned rooms are "very much like that experience you have at home."

While Marriott has taken most of the heat from road warriors for removing desks at some properties, it isn't alone. Several chains have been pushing new designs that upend the traditional room.

At Best Western's new Vib brand, bed headboards double as desks. Closets have been replaced with hooks on the wall and instead of a dresser there are drawers under the bed. Hilton's new Tru won't have closets. Instead there will be an open space with hangers and hooks on the wall. And the desk is replaced with a chair that includes a spot for a tiny laptop or tablet. Starwood's Aloft brand also skips out on the closet, instead offering some hangers behind a curtain in a built-in wall in the bathroom.

While hotels say this is what customers want, there is also a cost-savings. The big hotel chains don't own most of their properties but license out rights to them. And the owners and developers are pushing the parent companies to cut costs.

"They are more concerned about the (construction) cost, because they don't have enough time to make that up if we hit a downturn," says Best Western CEO David Kong. "People can't make the numbers work."

That's one of the reasons Hilton's Tru will cost about $84,000 a room to build, compared to $110,000 for its Hampton Inn brand. And Best Western just launched a new brand, Glo, which will cost $65,000 per room for construction.

These rooms are also easier to clean meaning hotels can pare down their housekeeping staff.

"This industry is starting to figure out what is efficient," says Scott Berman, who looks at the hotel industry for consulting and accounting firm PwC. "It begins with labor."