Hotels where the Great Gatsby would stay

It seems like Gatsby fever is starting to take hold with the highly anticipated opening of the 3D adaptation of the classic novel hitting theatres May 10.

Movie-goers will swoon for the epic love affair between Jay Gatsby, (Leonardo DiCaprio) and Daisy Buchanan (Carey Mulligan) as it heads toward its tragic end.

F. Scott Fitzgerald’s masterpiece The Great Gatsby takes place in Long Island and New York City, but in the 77 years since it was published it has come to represent far more than a geographic area. Gatsby is about an American era and way of life - the style, decadence and danger of the Jazz Age, Prohibition and The Roaring Twenties.

With Baz Lurhman’s frenetic film version of the book about to hit screens, we went looking for the hotels and inns that best celebrate the novel, the author, and the romance and glamor of the age. So get your flapper on! 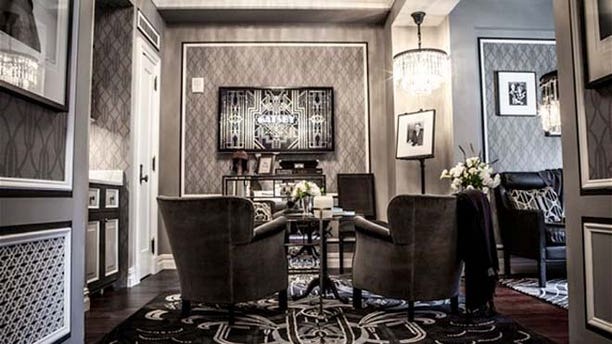 Scott Fitzgerald was a regular patron of the iconic Manhattan hotel – and he set the climactic final confrontation between Tom, Daisy and Gatsby in a suite here. To celebrate the release of movie and honor the author, The Plaza has unveiled The Fitzgerald Suite, a gorgeous 900sq ft Art Deco space on the 18th floor, with views of Central Park. The walls are lined with images from the new film, there’s a library with the complete collection of Fitzgerald’s work, and a slate of coffee table books that celebrate New York and the Jazz Age. Downstairs, the hotel’s Champagne Bar and Todd English Food Hall will feature live jazz and 1920s themed cocktails throughout the merry month of May. Order up a Tom Collins and practice your Charleston. 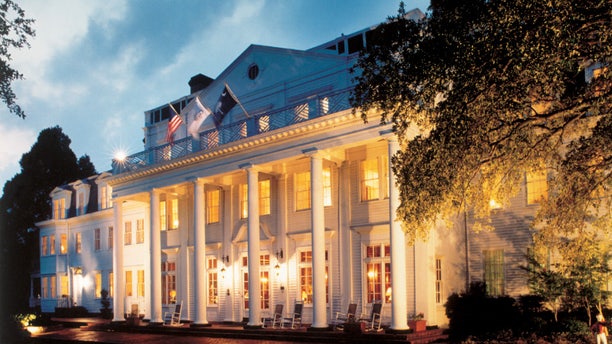 Oak-shaded Aiken, South Carolina, a short drive from Augusta, Georgia (hello, golf fans), has been a winter retreat for North East blue bloods since the late 19th century, and this handsome white-pillared hotel built in 1905 has always been the place to stay. It has a strong connection to Gatsby. Fitzgerald modeled Tom Buchanan on a dashing polo playing Aiken native and future Lehman Brother’s banker, Tommy Hitchcock, whose mother, Louise, helped finance the building of the hotel. To celebrate the new movie The Willcox will feature a series of Gatsby-inspired events in May, from a swanky new cocktail menu (try the Daisy Fay made with Champagne and house made blackberry and orange simple syrup); evenings of flapper dancing, and live Jazz ‘soirees’ Sunday nights with local musician James “Bubber” Miley, Duke Ellington’s trumpeter. Guests on the “On the Level” package also get their own cocktail set, a copy of the book, and a personal deck of cards and poker chips. We suspect Fitzgerald and Hitchcock would approve. 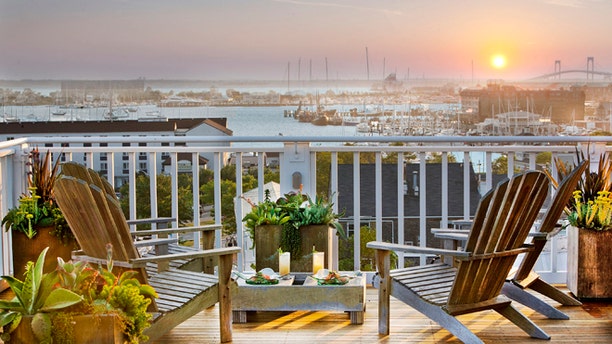 Newport, Rhode Island was the summer retreat of the upper classes long before Scott Fitzgerald created East Egg on Long Island’s North Shore. Indeed, the 1974 film version of the book was largely shot in Newport, with Rosecliff Manor on spectacular Bellevue Avenue standing in for Gatsby’s home. The 33-room Vanderbilt Grace hotel, a short walk from Bellevue, with stunning views of Newport Bay from its roof-deck bar, celebrates this connection with a two-night Great Gatsby Package that includes champagne breakfast, tickets to the iconic mansions (don’t miss Rosecliff or The Breakers), and a five-course dinner for two at in-house restaurant Muse, the menu an updated version of a meal served at The Breakers back in the 1920s. There’s also a sunset cruise, possibly on Rum Runner II, a classic wood-paneled prohibition-era smuggling boat that still does tours in the bay. Built as a YMCA by Alfred Vanderbilt in 1909 , the Grace has a gorgeous Roman-style indoor swimming pool and a popular rooftop summer movie series starting that includes a June screening of 1974’s "The Great Gatsby". 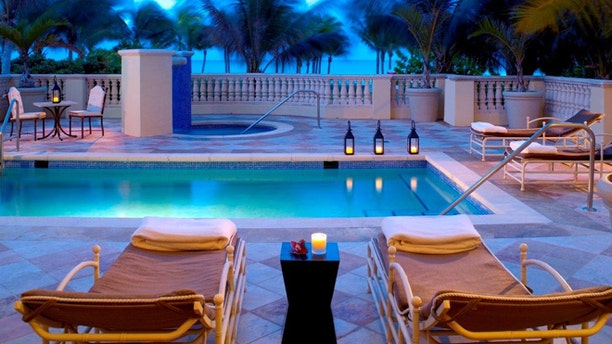 This sprawling Mediterranean-style resort on the Florida Riviera gets into the swing with a Gatsby-inspired Gilded Age Spa Package. True, the Gilded Age was technically the 1ate 19th century, not the 1920s, but we suspect Daisy (and Zelda Fitzgerald come to think of it) would approve of such decadent treatments as the 24 Carat Gold Rejuvenating Mask (ingredients include kaolin and gold powder), and the “Gilded Age Facial” with its steam and a deep brush cleanse. No better way to get yourself looking like the cat’s meow before an evening of gin fizzes and flapper dancing under the palms at beach-side restaurant, Costa Grill. 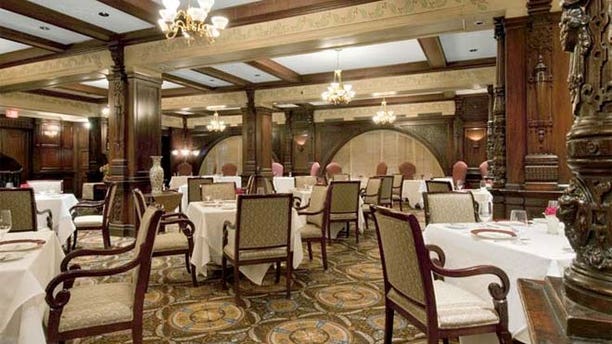 While doing Army training at nearby Camp Taylor, a young F. Scott Fitzgerald was a frequent visitor to Louisville’s most famous hotel, a 1905 Beaux Arts gem in the heart of downtown. It was here that he met the charismatic gangster and bootlegger George Remus, who became the model for Jay Gatsby, and he would choose the hotel’s Grand Ballroom as the backdrop for Tom and Daisy’s wedding reception. Now part of the Hilton group, the Seelbach remains a favored destination for visiting fans of the book, its two most popular suites being The Gatsby and The Fitzgerald. To celebrate the release of the new film, the hotel will host a Great Gatsby evening in the elegant Oakroom on June 1 at which guests will get a copy of the book, a 5-course 20s-inspired dinner, (Pheasant Under Glass; Lobster Thurmidor, Baked Alaska), and watch a screening of the 1974 Gatsby film starring Robert Redford and Mia Farrow. Try get the corner alcove in the Oakroom where another Seelbach guest, Al Capone, used to play cards. 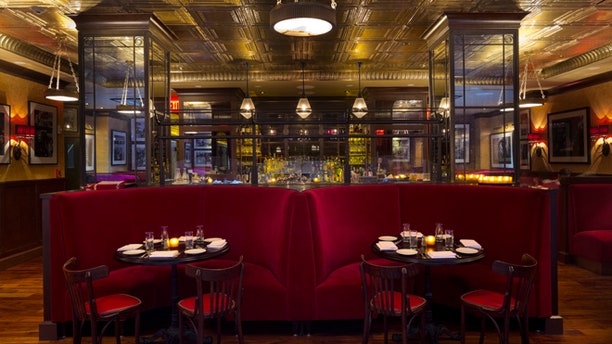 If Daisy Buchanan and her pals were around today, they’d make this swanky new boutique hotel in Greenwich Village their Manhattan playground. The Art deco interiors, plush seating, and walls in deep gold, red and blue tones are reminiscent of moody 1920s speakeasies, while a lobby library stocked with classic New York-themed books calls to mind the literary salons of the era. Rooms come with period furnishings that include vintage rotary phones.  The Jade’s “Gatsby Getaway” package includes two tickets to the new movie, a copy of the book, and two Gatsby-inspired cocktails at 1920s-styled restaurant Grape & Vine. Try the Bee's Knees (Gin, honey, fresh lemon, served in a martini glass with lemon twist) or The Prankster (Gin, Absinth, fresh lime and soda served in a highball glass with lime wheel garnish). The Bee’s Knees indeed.