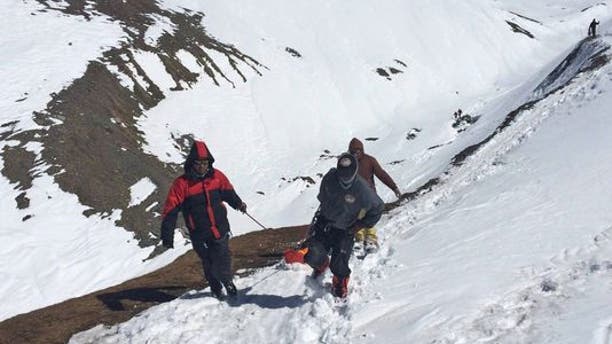 Rescue team members carry the body of an avalanche victim at Thorong La pass area in Nepal, on Oct. 17, 2014. (AP)

Tourism Department official Tulasi Gautam said trekkers venturing to mountain trails will be required to take trained local guides, and will have to rent a GPS tracking unit to help authorities trace them in case of an emergency.

Gautam said the government plans to announce the new rules nationwide before the next trekking season in the spring.

"The main reason for the high number of casualties is that those trekkers without proper guides were prompted to continue with their trek in attempts to beat the storm. So we plan to strictly enforce new rules of no trekking without porters or proper guides," Gautam said.

Yadav Koirala of Nepal's Disaster Management Division said two more bodies of Nepalese national were recovered on Tuesday by soldiers who remain in the Thorong La pass on the Annapurna circuit trekking route.

Although rescue operations ended on Monday, a smaller number of soldiers remain in the area, he said.

At least 43 people were killed last week when a blizzard and avalanches swept the mountains of the Annapurna region in northern Nepal. Of those, 21 were foreign trekkers and mountaineers from countries including India, Israel, Canada, Poland, Japan, China and Slovakia. Twenty-two were Nepalese guides, porters and villagers.

Many of the trekkers around the Annapurna route are independent hikers who do not hire guides. The route is also dotted with lodges and tea stalls that sell food, snacks and lodging.

Authorities also plan to improve the weather forecasting system and make it easier to deliver information to remote trekking routes.

The government also said all trekkers must now register at check posts while entering and exiting the trekking areas. Previously, foreign trekkers were required to buy permits or at least register before entering trekking areas, but Nepalese nationals were not. And no one was required to check out when they left.

"It was the biggest rescue operation in Nepal that included hundreds of soldiers, policemen and local officials. Swift response saved many lives," Silwal said. He added that every available helicopter was used in the effort.