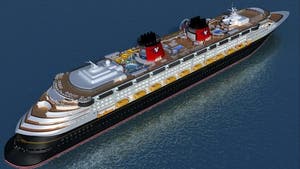 Disney’s Magic to get a fun-filled overhaul

Disney’s first cruise ship, the Magic, is set to undergo a major overhaul.  From new super hero characters to an enhanced day spa and refurbished dining spaces, here's a peak at some of the changes that cruisers can expect.

Picture yourself sailing aboard an ocean liner from the grand era of cruising, with opulent décor and a commanding structure.

This is the image that Disney is trying to create in its overhaul of the cruise line's first ship, the Magic, following scheduled upgrades this fall.

The Magic, set to be in dry dock in Cadiz, Spain from Sept. 10 through Oct. 7, will feature some major changes, including a lineup of new super hero characters, a water slide with a 37-foot drop, an enhanced day spa and refurbished dining spaces.

“Walt Disney was a master storyteller…Our job is to take what we learned from Walt and apply it to the experiences on board our ships,” Joe Lanzisero, senior creative vice president for Walt Disney Imagineering, said to FoxNews.com.

As a top Disney Imagineer overseeing the design team at the shipyard, Lanzisero holds the redesign project close to his heart.  (He actually lived aboard the 84,000 ton Magic when it was first launched in 1998.) He says the upgrades on the Magic will distinguish this ship from others in the Disney’s fleet, and from other cruise lines in general.

For example, the first place guests see when they board the ship is the atrium--which has been redesigned in the image of opulent 20th century cruise liners in coral and aquamarine hues, with a bronze statue of “Helmsman Mickey” keeping watch. As passengers travel through the ship, they'll see that each space has its own story, as well as an ocean-themed color scheme.

Some of the biggest changes will take place in the kids club, which is inspired by the namesake Disney attraction “It’s a Small World.” The Avengers will soon join Mickey, Tinker Bell and the Toy Story cast in Disney’s Oceaneer Club, in which giant storybook facades flank four activity spaces. Here kids can check out Captain America’s shield and become super hero recruits in the Avengers Academy; reconfigure a life-size Mr. Potato Head or slide down the Slinky Dog slide in Andy’s Room; play dress up in Pixie Hollow with Tinker Bell; or create crafts in the Mickey Mouse Club. And for the older kids, the Oceaneer Lab will function as a high-tech digital game zone.

On the Magic, adults can relax in the Senses Spa and Salon, which will now feature a barbershop. Or they can grab a drink in one of the three new bars, or share a fine-dining experience.

The most fun likely to be had, though, will be in the upper decks in the splash zone – and where, Lanzisero explains, families can really come together. The ship’s pool deck – all duck-themed after Donald Duck and his three nephews Huey, Duey and Louie –  has been redesigned to include waterfalls, a wading area, two new water slides: Twist N’ Spout and for thrill-seekers, the near-vertical AquaDunk.

But where the magic really takes place is in the dining areas. The dining halls have been remodeled to give the feel that you are in exotic locations sampling world cuisine.

A favorite among both kids and parents is the Animator’s Palate that features an animation dinner show, where guests create characters on interactive placemats, which then appear on screens alongside traditional Disney characters in shorts along the walls --allowing guests to become a Disney Imagineer.

Lanzisero is most excited to dine in the newly renovated Cabanas, which is set in Australia, and draws décor inspiration from the Disney-Pixar movie “Finding Nemo.” The beach-themed room allows for indoor and outdoor eating most popular during breakfast.

And lastly, the staterooms will also receive an upgrade with fresh coats of paint and brand new furnishings for when the Magic sets sail from Miami in October.

“Filmmaking is the history of our company and in the film the ‘establishing shot’ sets the scene,” Lanzisero said, adding, “It’s all about creating moments through our storytelling.”

You can find more information regarding fares and itineraries at the Disney Cruise Line website.