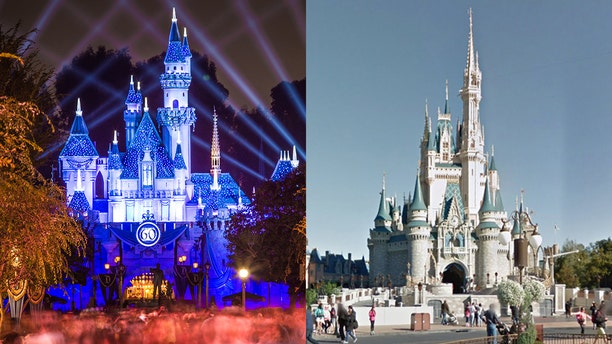 It turns out there's a world of difference between "The Happiest Place on Earth" and "The Most Magical." (iStock)

While at first glance, Disneyland and Disney World might look like they are the same theme park, just on different coasts, they’re very different. Read on to find out what makes Disneyland “The Happiest Place on Earth,” while Disney World is “The Most Magical.”

In total, there are four theme parks and two water parks in Walt Disney World in Orlando (EPCOT, Disney’s Animal Kingdom, and Disney’s Hollywood Studios, along with various yachting, beach, and golf resorts), while Disneyland in Anaheim, California, has only two theme parks and no water parks available.

While that may automatically make you think WDW is better, you may find Disneyland more manageable, especially if you’re traveling with little kids.

The Disney theme park in Anaheim opened in 1955, while the Orlando theme park opened 16 years later in 1971. WDW benefited from Walt Disney’s hindsight; Disney hated that the area around Disneyland was overrun with other non-Disney hotels and theme parks, because he felt that it “broke the illusion.”

To prevent this in Orlando, he bought as much land as he could in Central Florida because he wanted a bigger theme park to accommodate more guests and expand in size, if necessary. By comparison, the Disney theme park in Anaheim takes up about 510 acres of land, while the park in Orlando rests on about 30,000 acres.

While both parks share the same “lands” (Tomorrowland, Fantasyland, Frontierland, etc.), each theme park has rides that are exclusive to their respective parks.

Find out where you can find these 8 secret spots you never knew existed in Disney Parks.

Since the park in Anaheim is much smaller, getting to and around the park is an easier process.

If you’re staying at the Disney Hotel, you can simply walk to the guest entrance. In fact, there’s a special entrance to Disney California Adventure from The Grand Californian hotel.You can take the monorail from Downtown Disney straight into Tomorrowland.

If you’re at WDW, you’ll need to take the complementary system of buses, ferries, and a monorail system to get from your hotel to the various theme parks, around, and back again. Make sure you know the 15 items banned from Disney Parks before you book your trip.

Because it’s the bigger theme park, WDW has more to offer in terms of restaurants and dining. All of its theme parks and resorts feature some of the best dining experiences in the country.

Check out some of the newest—and most delicious—tastes you’ll find at WDW.

There are a number of benefits of staying at a Disney-owned hotelif you’re visiting a Disney theme park. At the Magic Kingdom, you can receive Extra Magic Hours (early entry and late night hours), priority Fastpass+, access to Magical Express, and free parking.

These incentives often make staying at a Disney hotel more attractive and cost-effective than staying somewhere else. At the Disney Hotel in Anaheim, the only benefit of staying on property is the Extra Magic Hours.

However, since it’s smaller and closer to non-Disney hotels, there are a number of less expensive places to stay around the theme park.

You’ll find Sleeping Beauty’s Castle at Disneyland, while the taller Cinderella’s Castle is the centerpiece of the Magic Kingdom at WDW. Check out magical, mind-blowing facts about Disneyland.

This easy system to hold reservations for popular rides and attractions, without the hassle of waiting in long lines, is available at both parks.

The Magic Kingdom offers Magic Bands, which are wristbands that allow you to electronically check-in to rides and attractions with a mobile app, while the park in Anaheim still offers FastPass paper tickets.

Disneyland has a classic feel to it because it was the very first Disney theme park. Walt Disney slept at the park after long days at work and you might even find a longtime Cast Member or two, like Oscar Martinez, who actually knew Disney.

While Walt Disney broke ground on Disney World, he did not live long enough to see it completed. He died in 1966, before it opened in 1971.

Next, don’t miss these 23 secrets Disney employees won’t tell you.

This story was originally published in Reader's Digest.