Allure of the Seas is Coming 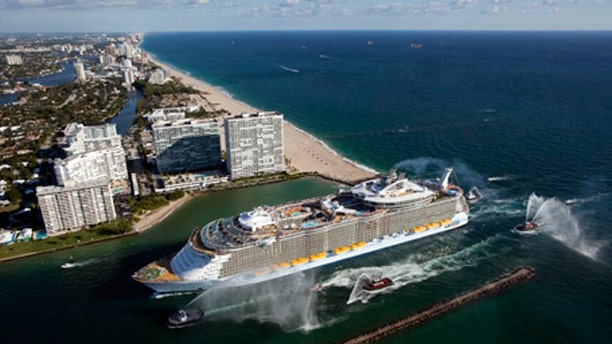 Meet the Allure of the Seas: it comes with more onboard excitement than any cruise ship in history, a distinction it can likely claim for several years.

Allure of the Seas is the sister ship to Royal Caribbean’s Oasis of the Seas, which debuted almost exactly one year ago. At 225,000 gross tons, Oasis was the largest cruise ship ever built, outpacing the previous record holder by almost 70,000 tons.

Allure is reportedly two inches bigger than its sister, an anomaly accidentally discovered by design engineers just last week. The small difference makes Allure the biggest cruise ship in the world, even though the two ships having functionally- identical superstructures.

Allure also has a few new onboard features missing on the Oasis (at least until Royal Caribbean can add them next March).  A 3-D movie projection system installed in the main production show theater onboard Allure will show new films from DreamWorks Animation including Shrek Forever After, How to Train Your Dragon and recently-released Megamind. Royal Caribbean also signed an exclusive agreement with DreamWorks last summer.

Similar in concept to “character experiences” by Disney Cruise Line featuring Mickey Mouse and Goofy, Allure will feature “live” characters from DreamWorks' movies. Cruisers will be able to get up-close and personal with Po (Kung Fu Panda), Princess Fiona and Shrek.

If spending quality time with movie characters isn’t enough, vacationers can take in an original ice show in the Studio B ice rink based on the movie "How to Train Your Dragon," while the AquaTheater showcases a special show featuring characters from Madagascar.

The entertainment possibilities go beyond DreamWorks.  The theater will also be used for productions of the Broadway hit “Chicago – the Musical.” The AquaTheater also features spellbinding aquatic acrobatic shows with dives from platforms towering 39-feet in the air. The Studio B ice rink theater features the best skaters in the world in shows sure to please all ages. And here’s the best part: There is no charge for any of these shows.

In addition to the DreamWorks characters and the movie theater, there are a few more advantages to Allure that will not be installed on Oasis until next March. Allure’s boardwalk will have a Rita’s Cantina for Mexican food rather than the Seafood Shack, and the donut shop has been replaced with a hotdog stand.

Booking Allure or Oasis of the Seas

Since its debut, Oasis has proven to be one of the most successful ships ever. This is a significant accomplishment considering the $1.4 billion ship barely had its financing in place on the day the shipyard handed it over to the Royal Caribbean (credit was tight in 2009). Many cruise skeptics predicted the ship, with its 5,400-passenger berth capacity, would be overcrowded with long lines and slow service.

Just the opposite is true. The excellently executed dispersive design lends the vessel exceptional passenger flow capabilities. There is hardly ever a wait for anything onboard except the single zipline ride six decks high above the boardwalk, which requires a minute of preparation (per person) for a five-second thrill.

The first passenger cruise sails from Fort Lauderdale, the permanent home port for both ships. This four-night itinerary sails to the private beach at Labadee, Haiti, plus two days at sea. I took this same cruise last year on Oasis and felt there was plenty of time to sample the ship and its private beach. The Allure's first cruise sails Dec. 1, 2010, and with the sail date just around the corner, prices are changing almost hourly.

Last-minute cruise prices change almost hourly. It is interesting that verandah cabins sell for less than “ocean-view” staterooms with only a non-opening window. The abundance of verandah staterooms and suites, and the shortage of what should be less expensive rooms explains the pricing differences.

Falmouth is an historic Jamaican city that was scheduled to be restored and receive cruise passengers by January 2011, but restoration is running behind schedule and all Allure calls there have been pushed back to May 2012. Once the port is ready, it is expected to show one of the biggest 18th Century slave markets in the Caribbean. This will be a regular stop on Western Caribbean cruises starting May 6, 2012 along with Labadee and Cozumel.

Seven-night cruises will alternate between eastern and western Caribbean itineraries leaving Sundays from Fort Lauderdale. The first to the western Caribbean leaves Dec. 5, 2010, for the Labadee private beach and Costa Maya and Cozumel, Mexico. Right now this sail date is the best buy I see at $749 inside, $999 outside, and $829 balcony.

Without a doubt – for a family cruise with something to please everyone it is very hard to beat Oasis and Allure, the two largest cruise ships in the world. The prices are higher than the average Caribbean cruise by several hundred dollars, but these are “must see” cruise ships, the kind everyone should try at least once.

*All cruise prices are for balcony staterooms except where stated, per person double occupancy and do not include government taxes.

If you would like more cruise information we urge you to consult our Cruising101 FAQ.

I started writing about stock market investing for Motley Fool in 1995, but previously I worked aboard cruise ships. I co-founded CruiseMates.com, the first cruise travel guide on the Internet, in New York City in 1999. CruiseMates, still one the Web’s top cruise travel guides was acquired by Internet Brands (NASD: INET) in 2006. Once CEO, I am now the editor of CruiseMates – Paul Motter.