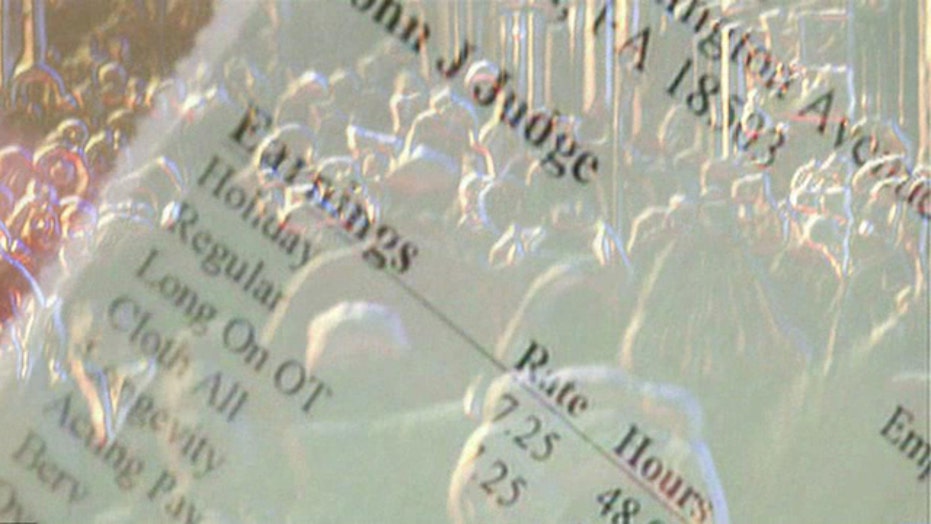 GARY B. SMITH: I don't see how it can't. The person in the clip summed it up perfectly. They said, "It makes a little bit of a difference," and a little bit of a difference times a few hundred million people makes a big difference. This has already been studied by economists. They predict four to five hundred thousand in jobs lost. A half percent lopped off the GDP. The fact of the matter is that if you look around in the studio there, everyone who gets a paycheck like they said in that little clip sees less money. That's less money that we're going to spend on groceries, at the drug store and at the gas station. That money gets sucked out of the economy and so do jobs.

TOBIN SMITH: Whether this sounds fair or not, here are the facts. The top twenty percent earners in the United States, not the fifty percent who don't pay any taxes by the way, but the top twenty percent are the ones that we look at and measure for the discretionary spending because that's at the margin. We will have a reduction, but we've made it out of the depression, the 1980's and we didn't cut payroll tax or come up with an illusory deal. Everyone knew this was temporary and the higher income people are staying at a spending level that will keep us going.

WALKER STAPLETON: I think it's going to hurt jobs. This is really a bait and switch on the middle class in terms of what their expectations were from a policy standpoint with the changes that were made to the payroll tax holiday. They're actually paying an extra two percent which matters if you're making fifteen to thirty-five grand. These are disposable incomes that are being taken away from their paychecks that they can't spend to go to the movies, on groceries or go to restaurants and I'm not so sure that the higher wage earners will make up the difference because we have to remember that they're being taxed at a higher percentage as well. It's worse noting that this extra two percent is going to an entitlement program in the form of social security that is in bad need of fixing. To go back to the six percent contributions of social security without finding an underlying fix is really not solving anything at all.

STEPHANE FITCH: It amounts to a hundred and fifty billion a year at a fifteen trillion dollar economy - that's not a killer number. For a middle class family making fifty thousand bucks, its eighty dollars less a month and for a slightly well off family it's an extra hundred and sixty bucks a month. These are real numbers and it's really unfortunate that the disgusting thing about how this all went down with how Congress really blew it on was that they could've phased this in and they could've given people more warning. The fact of the matter is that we will probably need to raise this tax again. What we need is more fair warning and give people more of a chance to prepare for this.

JONAS MAX FERRIS: A thousand dollars is coming out of someone's paycheck, but it's going into the paycheck of somebody in the Villages in Florida who's buying just as much stuff as the other person was going to buy. It's unfortunate that the government can't borrow the difference and given an imaginary tax cut forever, but two years is enough of that because it was borrowed money that we weren't having as payroll tax revenue to pay the Social Security benefits which they didn't cut in proportion. The economy long haul won't affect people because your wages will go up to adjust for this higher tax. It will hurt employment because employers now have to pay more to hire somebody than they did last year because there is a now a higher tax rate out there. When there is a tax cut your wages go down if you're an employee.

TOBIN SMITH: Of course it will reverse this trend. Ten thousand baby boomers per day are turning sixty-five in the United States. When a couple earns sixty-thousand dollars a year, paid all that Social Security and Medicare during their lives - they paid in a hundred and twenty-four thousand dollars of total money in. When those people sign up for Medicare and get Social Security, they will take three hundred and sixty-five thousand dollars out of the system. Who's going to make up the difference? Not the American tax payer. We're going to borrow that money.

STEPHANE FITCH: This hundred and twenty-eight million people number is phony. It's like Romney's forty-seven percent. Half of the people in that number are people who paid into Social Security and are now receiving checks. It's not like getting a welfare check or there are students who are borrowing money that they will pay back. They're using it to fund their college educations. Why don't we start complaining that too many people are driving on federal highways? That way we can make people feel that ninety-nine percent of Americans are on some form of federal assistance. If twenty-five percent of Americans are on your classic welfare - the hot lunches, food stamps and just seven percent of Americans are getting a real government handout then those are the numbers to fight over because yes, those are up.

GARY B.SMITH: One, there are too many people driving on the highways. Number two, Stephane has a good point. You quoted to two out of five number. That percentage of people getting government assistance has actually stayed pretty flat or the same for the last thirty years. I'm not concerned about that number. The number I'm concerned about is the makers vs. the takers percentage. Right now we have 1.2 private sector workers for every government employee or person on welfare. The number is going to get worse because as Toby alludes to, more people are going to get on welfare. This is how Greece got started. You have more people taking out of the economy and the percentage of people making the money to take from is going to get smaller and smaller.

WALKER STAPLETON: I think my concern with this issue is economic growth. I think the point made which was a good one is that we have anemic GDP growth. You're shrinking the people that are going to be the catalyst of economic growth. The only way that we can get out of the economic problems that we're in right now and the unemployment that we're faced with right now in America is if we grow our way out. We need to actually focus on the catalyst of economic growth - businesses. The only way that you're going to focus on businesses helping to grow us out of the economy is through a tax policy that incentivizes people. If you're redistributing from tax payers to government subsidies towards a dead end then you're not going to grow out of anything. You're basically focusing on the outputs of the economy rather than the inputs that are going to be stimulate economic growth.

JONAS MAX FERRIS: There are two factors to this. Part of it is demographics which we alluded to, and the other problem is the unemployment rate which is twice of what is was than in 2000. That comes with more food stamps and more unemployment benefits. That will go away with economic growth in the long haul. In some ways we don't have to worry about that part. This demographic situation is well known and is not going away, and it's getting worse. You need more workers paying in.

JONAS MAX FERRIS: Somewhere in the last twenty years school became way over priced for the value. Its price has gone up faster than inflation, but its value at best is flat. I'm not saying that borrowing money to buy a car is better than an education, but it doesn't have limitless value. Today you can start a business without a college degree and yet the government is making it easier to pay off your debt if your degree isn't as valuable. Students are getting over indebted in finding out that online degrees really isn't worth forty thousand dollars and it's bad for the economy in the long run.

STEPHANE FITCH: If you're not absolutely sure then take your time. My wife waited until she was twenty-four, figured out what she wanted to do, she graduated with straight A's and proved that you could benefit enormously. There is for a lot of students, West Point is free, trade schools are a much better deal and we're seeing a new world of online education that is less expensive and maybe the right choice for a lot of people.

TOBIN SMITH: The Pew center did research on economic mobility off the census of 2010 and applied it towards this recession. Clearly, the people who had graduate degrees did substantially better than the people of that same age who did not have degrees.

GARY B SMITH: I think for the vast majority of people that graduate degrees are not even worth it. Forty percent of the undergraduates don't even graduate a four year program in six years. We have eighty thousand people out there with undergraduate degrees and are bartenders or taxi drivers. I think if you come out of college with a skill like you're a chemist or an accountant then that's great.