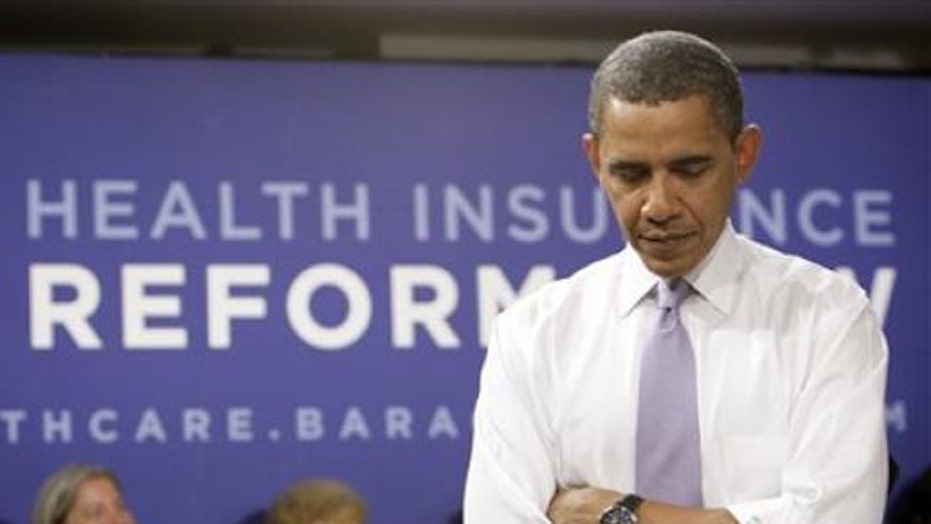 Who pays for ObamaCare delays?

Taxpayers on the hook?

CHARLES PAYNE: I don't know who will pay. It's not a full fledged vehicle from the administration stance saying, "We know we made mistakes in the plan." It's a political endeavor. We got 34 changes, arbitrary changes, made by the winds of the President of the United States, most are temporary, so if you thought these were bad ideas, you'd say let's scrap them or redo them. So the idea is maybe let's extend it past the next presidential election. It's toxic. It's destroying the company and confident.

DAGEN MCDOWELL: They are doing it so there aren't cancellations before the mid-term elections. I don't think the democrats care what the law looks like two years from now. The law's survival is a victory for them.

CHARLIE GASPARINO: You can't do anything this insane without changing it a little bit along the way. They took a really crummy system, and they quadrupled it. The insurance system wasn't that great. They took that and they made it bigger. This will never be fixed.

BEN STEIN: We have a habit of overpromising and being extremely vague. Yet this has a real impact in ordinary people's lives. The fact is that they're making bold promises, and changing them again and again.

CHARLES PAYNE: Part of him goes back to the Russian thinking of, we will do what we got to do to win. This guy is has gotten a taste of the cash as well. Believe me, when you blink after you won something without firing a shot. The markets matter and I'm sure that played a role.

DAGEN MCDOWELL: Not the markets in Russia. The markets are an investment by Russian billionaires in the west. In Miami real estate, in U.S. stocks, in European stocks, hidden in Swiss bank accounts, etc. That's how you topple them. You make them angry. You make them toxic.

CHARLIE GASPARINO: If we want to do to them what we want, we have to squeeze them; we have to take some pain in our market.

BEN STEIN: No, I think this man does not want the U.S. markets to go down. Let's remember, this is a man in late middle age, he has a young woman who can put her foot around her neck. He isn't scared about the money.

ADAM LASHINSKY: I think you are right Putin's economy is shaky. He can't fight a ground war in Europe.

TOP DEMOCRATS: WE ARE NOT GOING TO CUT SPENDING

DAGEN MCDOWELL: They don't have to cut because the U.S. can still keep borrowing money until the cows come home. That's why there's zero urgency.

CHARLES PAYNE: If you add up all the ones they printed up, that right there might give you the first billion. It's absolutely ridiculous. Why does it so far outpace inflation?

CHARLIE GASPARINO: This is why I'm against tax increases. I'm selfish and I'm greedy and they waste our money so badly they don't deserve it.

ADAM LASHINSKY: You already pointed out; the deficits are moving in the right direction. This is a policy document.