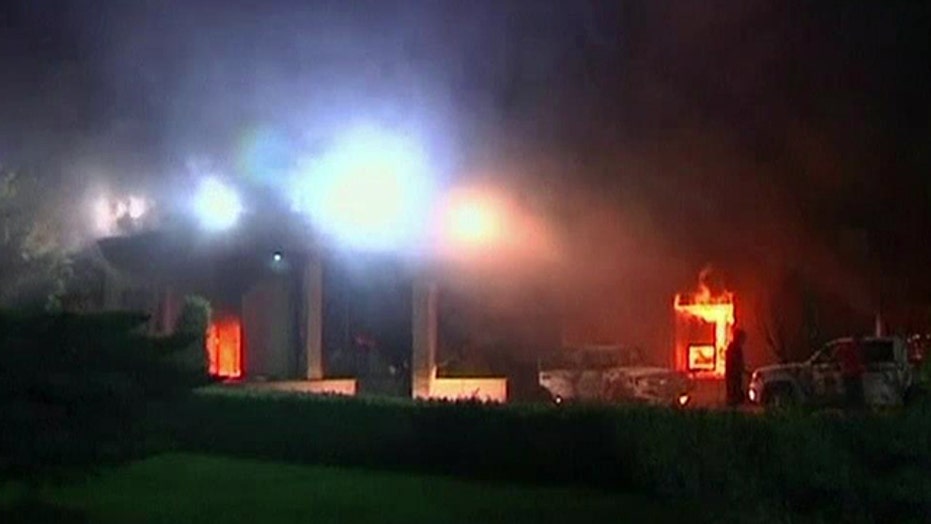 What really happened in Benghazi?

This is a RUSH transcript from "The O'Reilly Factor," September 8, 2014. This copy may not be in its final form and may be updated.

O'REILLY: "FACTOR Follow-up segment tonight. If you saw Bret Baier's special over the weekend, you know that a new book called "13 Hours, The Inside Account of What Really Happened in Benghazi" will be released this week.

With us now, two of the authors of the book, Mark Geist and Kris Paronto. Now, you guys were private security guys. And I just want to lay the background here.

MARK GEIST, CO-AUTHOR, "13 HOURS, THE INSIDE ACCOUNT OF WHAT REALLY HAPPENED IN BENGHAZI": Yes.

KRIS PARONTO, CO-AUTHOR, "13 HOURS, THE INSIDE ACCOUNT OF WHAT REALLY HAPPENED IN BENGHAZI": We were.

O'REILLY: OK, so you were in Benghazi. You knew the turf. You knew it was very dangerous there, right.

O'REILLY: And you had to watch yourselves when you were walking around, right.

PARONTO: Of course, at all times. Any place that we go to was a high-threat environment.

O'REILLY: All right. So, you're armed, you're walking around but you're low key.

PARONTO: Very low key. You don't have a gun sticking out.

O'REILLY: All right. You knew who they were?

O'REILLY: All right. So, all hell breaks loose on September 11, all right. And you guys hear about it pretty quickly, right.

PARONTO: Yes, we do.

O'REILLY: From? Who told you?

PARONTO: We actually got a call on our radio from a team leader who'd be a staff, an actual staff agent with the agency.

O'REILLY: From a CIA agent?

O'REILLY: So, the CIA called you.

O'REILLY: You all went into the little compound you had in Benghazi, right.

PARONTO: We all lived in the same compound.

O'REILLY: OK, so you all lived there.

PARONTO: So, we're already there.

O'REILLY: So, you were all assembled.

O'REILLY: And you know that the ambassador is in trouble, right.

-- the security officers were being overrun and the compound was being --

O'REILLY: All right. So, you didn't know the ambassador was there?

GEIST: We knew that he was there but we didn't know the extent of what was going on over there.

O'REILLY: Because they were calling you from over. So, this is a harrowing thing. I mean, they're under fire --

O'REILLY: You're a mile away.

O'REILLY: "Let's get the hell over there," right.

O'REILLY: Why didn't you.

PARONTO: We actually jocked up and got ready to go and as, you know, we told in the book, that we were ready to go within five minutes.

PARONTO: Within five minutes, we were jocked up and ready to go.

O'REILLY: And then how, Mark, how long did they keep you from not going.

GEIST: Almost 30 minutes, or close to it.

O'REILLY: OK, so you were ready in five and you wasted 25 minutes.

O'REILLY: Because the CIA station chief, who won't name, by the way - -

PARONTO: His name is Bob. We call him Bob in the book and --

O'REILLY: I want to know his real name.

PARONTO: Well, I wish we could put that out there.

O'REILLY: Why can't you.

PARONTO: Safety. And it's for his -- whether we like it or not, it's still a safety issue. And it will get to -- and that's what I hope Mr. Gowdy (ph) does when he gets to the bottom of it. When he finds out what this --

O'REILLY: Who do you hope to get to the bottom of it.

PARONTO: What happened and who gave us the order.

O'REILLY: But who do you want to do that.

O'REILLY: You've got to give Congress or somebody the guy's name because he has to be put in front of a Congressional committee. Surely, you realize that.

PARONTO: Yes, and it will happen in the right channels. I don't think we're doing it right here.

O'REILLY: All right. I mean, I'm not going to quibble with the safety issue. We don't want anybody hurt.

But, surely, this man who told you to stand down for 25 minutes while the American ambassador was murdered and other -- and four other Americans, has to explain himself. Because then, it goes up the chain.

O'REILLY: Was he ordered from Langley, Virginia, CIA -- to keep you guys out of the fray. Was he or was he not. It's pretty simple.

PARONTO: Yes. And that's where we don't even know. We have not been given that information.

O'REILLY: All right. So, you don't know whether, back in the United States, orders were given not to intervene.

PARONTO: No, we don't know what level it came from.

O'REILLY: Do you know.

O'REILLY: All right, so you don't know. So, your level is just on grounds.

O'REILLY: And, inexplicably, you, as that's what you write in your book, you wanted to get going and they held you back.

O'REILLY: All right. So, you countermanded their orders and you went anyway because you really weren't working for them.

Now, Colonel Hunt, our Military Analyst, watched the special -- the Baier special, and he said it isn't unusual for the chain of command in these kinds of situations to hold you back until they know what's going on and what kind of stuff you're going to walk into because they don't want you guys to get cut down. Is that legitimate.

GEIST: Well, the question I would say is -- I would ask is, you have six highly-trained operators that have almost a hundred years of experience combined in counterinsurgency operations. Are you going to hold back that asset.

O'REILLY: So, there was six of you ready to go. You're an ex-Marine, you're an ex-army ranger.

O'REILLY: You know, when you've got guys screaming, "We're going to be murdered unless you get here," I make the call. I mean, I say, "Go," all right. That's what I -- that's what I'm going to say.

PARONTO: Of course, sure.

O'REILLY: But there was danger that you would have been killed, too, to be fair.

PARONTO: We could have been killed 25 minutes later.

GEIST: Well, you know, and we do that everyday. That's part of the job.

O'REILLY: No, but the assessment was coming in. They were overly cautious.

O'REILLY: Which is insane.

GEIST: -- to give information.

PARONTO: And because we had not report.

PARONTO: I think that the truth will come out eventually --

O'REILLY: Do you believe that higher up, there was a screw-up.

PARONTO: I can't say scandal. Can I say screw-up, there could have been. I don't know.

O'REILLY: All right. So, you guys want to stay out of that fray. And I don't blame you.

O'REILLY: I don't blame you.

O'REILLY: The guy who knows is Leon Panetta, the Former Defense Secretary. He knows, and I want to tell it to the audience directly. Leon Panetta knows exactly what happened.

And Leon Panetta has not -- has not been honest with the American people. That is the truth. I know this man very well, Leon Panetta.

And I've asked him time and time again. He knows what happened. The book is "13 HOURS." Thank you, gentlemen, we appreciate it.

PARONTO: Thank you so much.