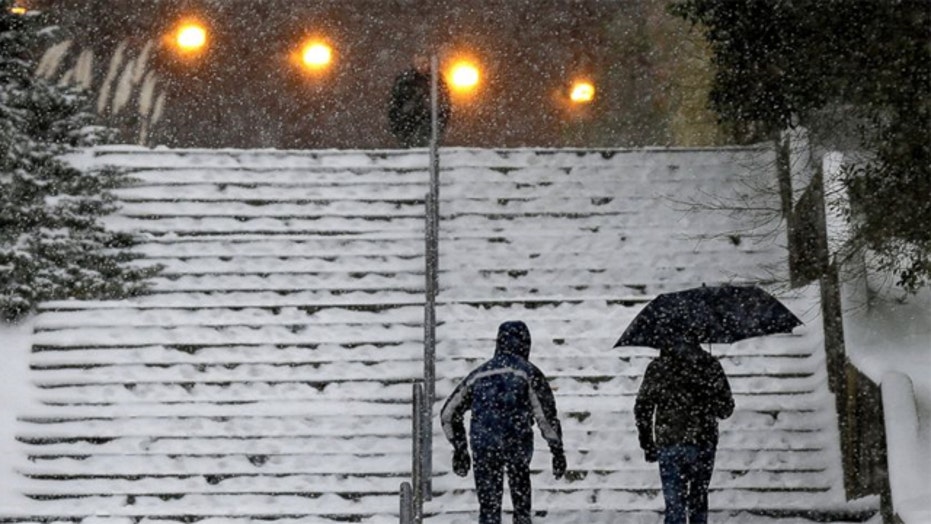 Weather to blame for jobless recovery?

JOBS FRONT AND CENTER AS NEW DEBATE OVER TAXES ERUPTS

JOHN LAYFIELD: Well look, we already got the tax hikes. The president, remember, a few years ago said that if we just go back to Clinton-era rates that everything would be fine, the deficit would be taken care of. We said at the time that that was only about 40 to $50 billion a year, but that was a political speech. He was being a politician. It didn't work and now, we're seeing still, despite a good number on Friday, the lowest labor force participation rates in 30 years. There are one million fewer jobs than when the president first took office, despite the fact we had a lot of jobs added. No one is taking the budget serious. The White House promised in 2010 that GDP growth would be 4.4 percent in 2013. It was 1.9 percent, less than half of what they projected. They are doing the same thing now. Now they're projecting a 3.1% rate. That's pure fantasy. The best economists are saying 2.5%. This is fiction.

JONAS MAX FERRIS: In theory, tax hikes with spending cuts would be better for the economy, especially now that we're not in a recession and we can handle the government spending cuts. We kind of went through the spending cuts thing. It's never going to get any further than it just did, which wasn't very far. They didn't like the sequester after a while. So realistically, the only way we will close this multibillion dollar deficit every year is with more tax increases. Now, we saw some of the Clinton-era tax come back to the top 1 or 2% of the country, and we saw the deficit shrink. To get it to really go away like it did in the late ‘90s, everybody's going to have to go back to the tax cycle. The other 96% of the country is going to have to see their taxes go up. Without spending cuts, that's what we have to do. It's better than lowering taxes with no spending cuts and widening the deficit. How will we handle our next recession if we have a wider deficit? How are we going to handle the aging baby boomers with a wider deficit than we even have now?

TRACY BYRNES: Brenda, I don't understand why they don't understand that raising taxes just hurts the middle class. They think they're just taxing the rich, but the rich can hire billions of people to figure out how to avoid pay these taxes. There's a reason people are leaving high-tax states. They're moving their money. They know what to do. Middle class people don't have that kind of resources. And they get stuck with the bill every single time. It backfires. I don't know why they're not getting it. The middle class is getting pushed away. We keep expanding the earned income tax credit for lower income people to the point where it almost doesn't make it worth getting a job because you won't qualify for that. So, you're giving money away and taxing the middle class.

GARY B. SMITH: Brenda, I think it's easy. I prefer to phrase it like this: It's either we keep the money or the government keeps the money to spend it. If most people think about it, when we give the money the government to spend, what do we get for it? Look, I'd be all in favor of giving tax rates out the kazoo if it grew the economy and everyone, as Tracy said, benefited middle class, upper class, lower class, everyone benefited. But that's not what we've seen. We gave trillions of dollars for the Obama stimulus. What did we get for that? As John pointed out, we have less jobs now. We gave hundreds of millions to Obamacare, and everyone looks at that, it's a freaking disaster. So when we, the general people, give money to the government through taxes, they squander it - things ridden with fraud, like Medicare, Medicaid. Yet when we keep the money and spend it, it's spent more efficiently and better. If we spend it silly, then that's our fault. But when the government spend silly, they ask for more money. It's just ludicrous to me that people would think, ‘Let's give the government money and have them spend it more efficiently than we can.

CHRISTIAN DORSEY: Absolutely. What the president is calling for is closing tax loopholes which cause some individuals and businesses to unfairly pay a lower amount of tax than they're otherwise obviously obligated to do and then, using that money to invest in our real economic problem, restoring growth to the labor market so we have reduced unemployment and growing wages for everyone. That's the true thing that you need. You don't get there from tax cuts. We've seen that historically. It only takes a quick look at common sense to see why. When you have tax cuts and you don't change your spending habits, you are just adding to your deficit and getting very little in return. So to hear folks at cpac say tax cuts yet again, it's the same solution for every economic condition.

GARY B. SMITH: Absolutely. I don't understand this. Lois Lerner has spoken to the Department of Justice fully without taking the Fifth Amendment apparently. Here's the catch, the Department of Justice is just a cozy operation run by an Obama donor. I'm not even certain they're after the truth. The Congressional investigation is after the truth here. When I worked at IBM, if my manager asked me about a project I botched up, I couldn't say, ‘Gee, I have to take the fifth. I'm not going to talk about it because it might incriminate me.'

Look, we're just trying to get to the bottom of this. Unless there is something she is trying to hide, I can't for the life of me figure out why a government employee would take the Fifth Amendment. I think it's just horrendous.

TRACY BYRNES: The FBN is apparently saying they won't file any charges, but they haven't interviewed all the witnesses yet, so how do you make a decision like that?

On behalf of the American people, we all have a right to know the truth. In theory, they work for us, so we should know. What is she hiding now? It makes you want to know more. The whole thing becomes like a big sham. You can't help but think there is way more to this than we actually know.

CHRISTIAN DORSEY: If we're after the truth, why in the world hasn't congressman Issa accepted her offer to give a private deposition. What he wants is political theater. Lois Lerner, despite being a government official, is also an American citizen and the constitution says you cannot be compelled to testify if you don't want to. That's her right, whether we like it or not. She had offered to give the information and chairman Issa has declined.

JOHN LAYFIELD: This is an absolute three-ring circus between Reps Issa and Cummings. These two guys embarrassed our country. I expect them to throw water balloons at any point. We're trying to figure out if there was maliciousness here. Miss Lerner said tea party conservatives were hit with extra scrutiny. Now, all of a sudden, she takes the fifth and doesn't testify. There is absolutely no culpability in Washington, D.C., over anything. No truth that will be found in this three-ring dog and pony circus that these congressmen perpetrate.

NJ TEEN SUING HER PARENTS TO PAY FOR COLLEGE

TRACY BYRNES: Do you see the look on that kid's face? I could smack it right off. How dare she? How dare she? Shame on the adults in this case who took it. Shame on the father of the friend funding the lawsuit and now, the attorney who took on the case, come on, send this kid home. Smack some sense into her. Parents had some really minor curfew issues. These are not tough rules. Stop being a brat. Your parents have sacrificed their whole life for you.

CHRISTIAN DORSEY: Absolutely not. All the money being spent on attorneys here, the families ought to be put in therapy and mediation. This is ridiculous that this has to be aired out in the national media and that this has to take up a court's time. Put the family in a room as long as it takes and have them work it out.

JOHN LAYFIELD: I would take them and Cummings and Elijah and send all of them to Sri Lanka with whatever personal injury ambulance chasing lawyer took this case. This is ridiculous. We need loser pays in our court system in America. That would stop some of this. This is horrible.

JONAS MAX FERRIS: This is why there are a lot of reality shows out of New Jersey.

GARY B. SMITH: I tell you what, I made my share of screw-ups, like Jonas. I probably did do stuff like that. The fact is, Jonas, so what? The court protects the kids from emotional and physical abuse. That's kind of where it stops. Parents are sometimes jerks. They screw up a lot. I screwed up a lot, more than a zillion times, but that's the way it happens. The kids screw up, too. It's not the court's job to come in and say, ‘This is how you're going to parent.' I do admire the kid's moxie for doing this, if she had showed that much motivation in going out and earning money, she would be having a full ride at Harvard right now, but this is not the court's job, no.