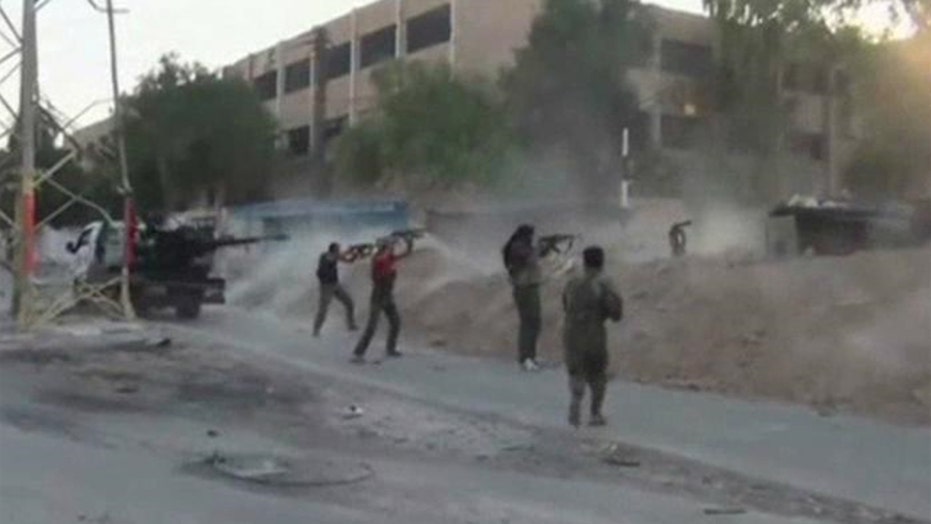 RICH KARLGAARD: Yes, and this is a national tragedy for blue collar employees, it's horrible. The core problem is that we have a tax and regulatory structure that punishes employers that hire blue collar laborers. For example, the largest employer in California is Chevron, which gets taxed at a federal and state combined rate of almost 44 percent. Meanwhile in Silicon Valley, Google and Apple, which have few blue collar laborers, Google is taxed at a federal and state combined rate of 10 percent and Apple about 15 percent. There is a huge disparity which is great if you are a white collar skilled laborer in this economy. It's just horrible if you are a blue collar laborer. The federal government doesn't realize how it's punishing these kinds of companies.

ELIZABETH MACDONALD: I think the poor wants a job, not welfare. The U.S. economy is still in the protective custody of the Obama administration. They did the exact wrong thing at the worst time, meaning the recession in the U.S. There are 2 gigantic bureaucracies in the U.S. that are putting a lot on top of companies, meaning health care and financial services reform. The problem is that the stigma is getting lost on using food stamps.

JOHN TAMNY: I'm still an optimist, I look at the Reagan years, the Clinton years, and it tells me that Americans love prosperity and are much happier when they are working and have opportunities. Government is an expert at wrecking an economy, from spending increases, overtaxing us, over regulating us through things like ObamaCare, making it impossible to hire, dollar devaluation, they know how to create poverty, which puts people on the margin, the government dole. These people are not happy; they are much happier when the economy is growing in the Reagan and Clinton years.

BILL BALDWIN: The Obama economy has created growth in the number of people collecting disability, food stamps, and unemployment for over a year. The dilemma is how to be compassionate without warping incentives. I think prosperous people should be dipping into their pockets a little deeper and welfare allotments should be greater. Work requirements for all of these programs should be greater. The Obama administration is moving in the other direction and trying to weaken work requirements so it is easy to not apply for a job.

SABRINA SCHAEFFER: Since 2007, the SNAP program has tripled in size. We spend $70 billion a year trying to support more than 47 million Americans, that's one out of every 7 Americans to be on food stamps, it's a very bleak picture. How do we help these people? How do we make sure that Americans have the basics in terms of food, shelter and clothing? As government steps in and makes us a country of dependent people it crowds out civic society, churches, synagogues, schools and neighborhoods who are traditionally better equipped to help those in their community who are in need.

Will the stock market be the next bubble to burst?

SABRINA SCHAEFFER: We are at risk for a bubble but part of the risk is because people don't know where to put their money. Should they invest in real estate? Invest in the stock market? When you see the stock market close 140 points up like it did on Monday, there's a tendency to jump in but there is a false sense of security in terms of the business market today. Neiman Marcus was just bought for $6 million dollars or Koch industries buying Molex for about $7 billion dollars and people thinking its ok. They aren't thinking about the fact that ObamaCare is going to be implemented in a few months which will wreak havoc on the economy.

JOHN TAMNY: When you think of quantitative easing it's a horrifying perversion of money that robs it of its sole purpose. That I don't think could be driving a stock market bubble if anything its restraining. When investors invest in the stock market, they are buying future dollars. Quantitative easing is an explicit devaluation of the dollars. The better question to ask is if the fed wasn't meddling like this and holding our economy back, how much higher would the stock market be? The Fed is the problem, not the driver.

ELIZABETH MACDONALD: Even the money they stock away, it's going to get devalued because the dollar is dropping, it will get hurt. It's like changing the number of ounces in a pound. The Fed has been in a permanent state of emergency, they are printing and spending money like Vegas drunks. I'm not sure if the stock market is in a bubble, its trading on a PE basis at half of what it was in the dot come era.

RICH KARLGAARD: I think it's fairly valued, maybe slightly overvalued now. But compared to what? The emerging market economies which were the stars in the international stock markets for years, their currencies are dropping fast and capital is leaving those countries. Interest rates are low. What do we have left? The American stock market. Profits are still high. I'm always wary in September and October, history says these are volatile months but I wouldn't pour new money in, nor would I get out.

BILL BALDWIN: The Fed has always been playing a game called ‘asset bubble'. If you give people the illusion of wealth by re-pricing their houses higher and making their stocks go up even though the houses aren't any bigger than they were before and even though the companies that they are investing in aren't any more productive than they were. This bubble works to a modest degree. I think stocks are overpriced by 15 percent, and under Greenspan they were overpriced by 100 percent.

RICK UNGAR: I don't know why we haven't been talking about how corporate profits have been good. Isn't that why the stock market is good?

Flipside: Richmond, California lawmakers the first in the nation to acquire homes worth less than their mortgages

RICH KARLGAARD: Richmond gets its ideas from its neighbor Berkeley which is Havana on the bay and this is a foolish idea. The only way to get a market recovery is when you let prices drop to their natural level and there is plenty of money in the Bay area that would invest in real estate if it would drop to its natural low price.

ELIZABETH MACDONALD: This is magical, science-fiction thinking on part of this very poor city that taxpayers are going to have to now foot the bill for this bad policy. Democrats rejected this idea in congress because litigation, lawsuits are going to hit the city and banks will never lend to anyone in that city again because of this bad policy.

JOHN TAMNY: It's a bad signal. It tells the irresponsible in the city to buy a house you can't afford because you will be subsidized by the prudent who don't buy that of what they can't afford. It's terrible for housing and will drive investors away from the sink of wealth in housing, which would be a good thing but let's not do it.

SABRINA SCHAEFFER: I can sympathize with the mayors and city councils in places like Richmond and Stockton because when you have the increase in foreclosures, you have an increase in abandoned homes, crimes and decay. These are real problems for a city. We have to stop bailing people out; stop propping things up, and stop buying. This is a fool's error and we have to let prices fall to their market value.