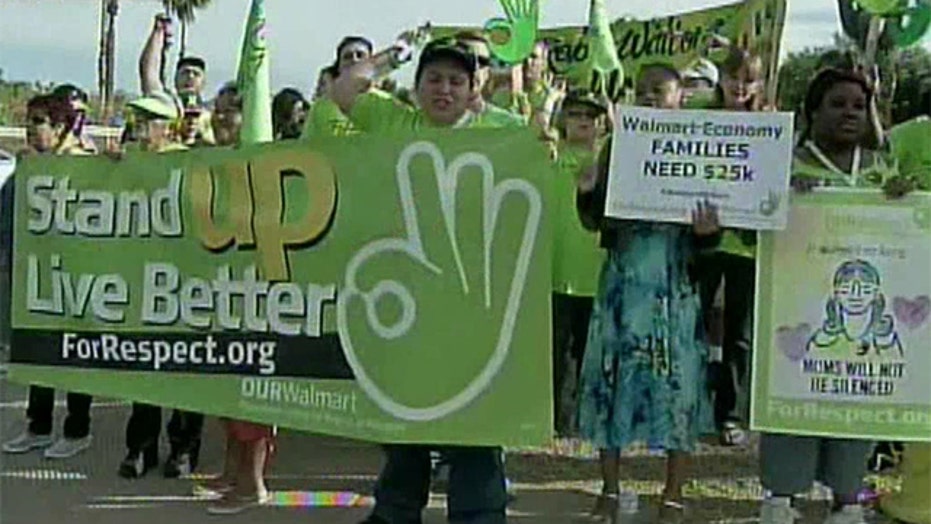 Are workers getting jobbed by the people who are supposed to be fighting for them?

WALMART COO: PROTESTERS ARE BEING PAID BY UNIONS

CHARLES PAYNE: New York City is probably the worst case of income inequality in the country; you are either rich or poor, and almost 2 million people in poverty. Wages have gone down, and they don't want Walmart to come here and create jobs? That's rich. I don't know how politicians get away with it.

DAGEN MCDOWELL: It makes zero sense, and it goes back to whether or not you are a union proponent, there's no such thing as a good job unless it's a union job. They would rather people go without work, food and shelter if it means giving kind of a thumbs up to a nonunion shop like Walmart.

BEN STEIN: There are extraordinary high prices at all the local neighborhood stores, and they would be demolished by Walmart. It's been calculated over and over and over again, if there is a Walmart in the neighborhood it is the equivalent of the consumers having a wage increase. Why is it that the selfishness of the council members trumps the best interest of the people in New York?

CHARLIE GASPARINO: This is much more political than you are leading on. As somebody born in the Bronx, there are parts of the Bronx where you can't get affordable food. They're food deserts in the Bronx. The places you can get fruit and vegetables, are crumby stores. Walmart would bring affordable foods to that area and that's how disgusting this is.

BEN STEIN: I think cruelty to animals, in terms of animals we are going to eat is outrageous, it's bad enough we eat them, but to torture them before we eat them, I just can't believe that ad.

CHARLIE GASPARINO: Anybody who thinks about cutting animals' testicles off and compares that to cutting in Washington, D.C., is out of their mind.

DAGEN MCDOWELL: The idea of cutting spending is really resonating with people. Two-thirds of annual spending in D.C. is mandatory, it's mostly entitlements and welfare. You add on defense and it turns out to be 84%, so you have very little you can cut.

CHARLES PAYNE: We do need people to say they are going to try and go and cut pork spending. We are missing a greater picture here. We have to upset the applecart if we want things to change.

DAGEN MCDOWELL: One, it's hard. Its alcohol and Ambien. That's what is causing this, its mixing alcohol and medication. It's related to where the aircraft is registered. A lot of them are registered overseas and they cannot prosecute these idiots.

CHARLIE GASPARINO: The punishment must fit the crime. These guys ruin an entire flight for everybody. They should be thrown into jail for 30 days.

BEN STEIN: When they have unruly passengers you should be taken to the front of the plane, escorted off, and politely, but firmly shot.

ADAM LASHINSKY: These people make me very nervous. I get antsy when they start acting up and they don't want to behave themselves. They should be prosecuted and thrown in jail. They're putting people at risk even more than they're being nuisances.

It served us all right. The smell was so amazing they had to bring out industrial cleaner.