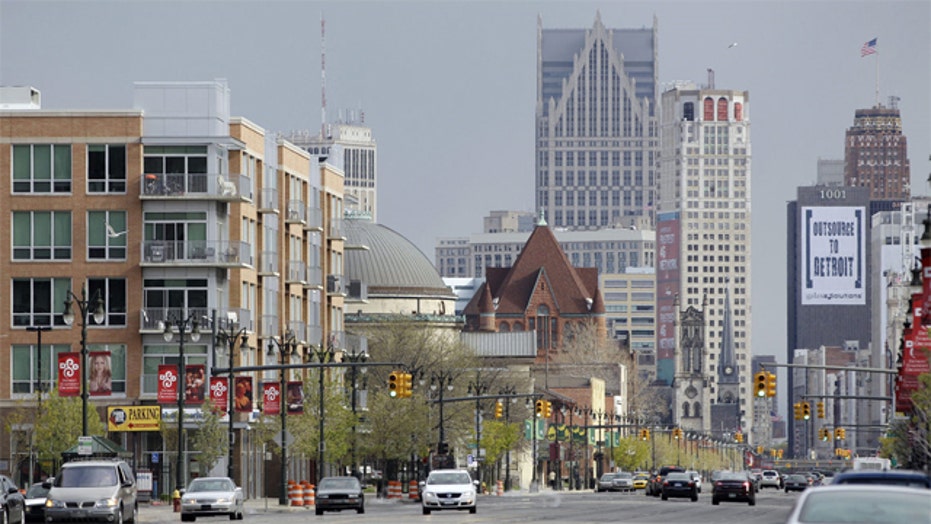 Time to scrap public pensions before they all go bust?

IN FOCUS: New York City and Chicago may have same fate as Detroit after facing pension problems

JOHN TAMNY: Yes, get rid of them. What is public service? It's a sacrifice. It is supposed to be a short term sacrifice before you go into the private sector and produce real economic growth. The problem now with high government pay and big pension plans is that we are creating lifelong government workers that are a burden to those working in the real economy. If you get rid of them, they will have an incentive to get back into the real world and cities will no longer have pension problems.

RICK UNGAR: In New York, 95 percent of every public employee doesn't contribute a nickel into their retirement, which is not ok. We don't need to scrap these programs, we can't forget about people who have worked their whole career and are expecting their pension, but it is time to reform them.

STEVE FORBES: Unless they do file for bankruptcy, cities cannot scrap most of these plans because of state constitutions which say you cannot do that. So you have to negotiate with these unions to do it. What they should start with is having 401k plans for new workers and then try if you get higher interest rates to annuitize what their obligations have been so far and then cap it in the future.

RICH KARLGAARD: Unfortunately our politicians are mathematically ignorant. For example, take CalPERS which manages the California state pension fund, it is assuming a 7.5 percent annual return from now until Armageddon. No one is getting 7.5 percent today without putting their money at risk. 5 percent is a more realistic assumption today. Pensions should be cut by a 1/3 right off the bat to reflect real market returns.

ELIZABETH MACDONALD: We see reform happening already, you can change the structure of government pensions for future hires, meaning into a 401k. They are doing it in places like Alaska and San Diego, Utah is going into reform, so is DC. You can cut unfunded health care benefits, so they can be cut without going to court, that's already happening in Stockton and Viejo. The irony is that Healthcare maybe taking care of this problem already. Health reform is weighing whether to hire new workers or cut back on city services. So do you cut back on city services like police and firefighters or reform pension systems?

SABRINA SCHAEFFER: There is another side of the story which is American taxpayers. There are hard working Americans out there that shouldn't have to shoulder for unreasonable compensation packages. The financial landscape is shifting, Gallup recently found that current retirees are relying largely on pensions and social security, but those approaching retirement, future retirees are planning on relying on their 401k and their IRA's. I think it's important to remember that people are accustomed to doing these private, individualized savings plan and we need to start shifting with those younger workers.

STEVE FORBES: If the cooking is so great, why don't they eat it? The fact of the matter is that they don't like it. As for the saying, oh we will have a brain drain, that assumes there are brains to drain and if they are, they should be in the private sector. If these people are so essential, give them a pay raise and let the taxpayers decide if they want to spend that extra money.

RICK UNGAR: This is a made-to-order PR thing for people who are against Obamacare, I get it. It's the result of a little number that a GOP senator pulled at the beginning, it all went in a certain direction, and it was ill-planned and silly. Congress is being treated like a small business; they can go to the exchanges, in fact they still have to. They are entitled to pay a portion of the premiums and pay whatever portion they decide to pay off their employees. It's no different than what happens to anyone working here at FOX, who has their insurance covered by their employer.

SABRINA SCHAEFFER: I think Michael Cannon over at the Cato Institute put it perfectly, he said now we have a ruling class versus the rest of us. Obamacare is for the rest of us, the commoners. All of these people up in congress are getting out of it; it's not just congress, what about President Obama and his family? What about the justices and their families, the Supreme Court and their families, federal judges and 1,200 corporations and unions? This is picking winners and losers at its worst.

BILL BALDWIN: Obama said if you have a health care plan and you like it, you can keep it. Why not let these slobs keep their plans. If Steve thinks they are overpaid, let them put a bill through his congress and cut their pay. Private sector people aren't taking pay cuts.

JOHN TAMNY: Government workers are in an economy suffocating burden. The last thing you want to do is create an incentive for more people to go to work for government. If anything, they should have a more onerous health plan so they have an incentive to exit the government sector and not be a burden on us.

MIKE OZANIAN: That's the hypocrisy of Obama care because when a lot of people in the private sector said that's one of the problems with this bill, it's going to cause a brain drain in the private sector, they denied that, they said no, that wouldn't happen. By the way, lots of people have lost their coverage with Obamacare. It's just one more thing about this that the president said that is not true.

FLIPSIDE: Johnny "Football" Manziel under fire for allegedly accepting cash for autographs, but on the FLIPSIDE, why not let athletes collect cash?

MIKE OZANIAN: College football players already make money, question is, how much. They get scholarship money, stipends, but should they get money for licensing? I say yes. The NCAA acts as a cartel and negotiates as a group, it has these huge TV deals, huge licensing deals, and the players deserve a piece of that.

ELIZABETH MACDONALD: I don't like it. It would change college sports forever. You'll have more lawyers and bureaucrats at colleges negotiating these deals, that means tuition costs go up, that means the richer schools will get these players.

RICH KARLGAARD: The NCAA is greedy and makes congress look like saints. Why single out athletes? If I had a scholarship at MIT and was doing engineering work, should that preclude me from taking summer work with a salaried summer job? Should I have to wait before I graduate to take a salary? Why are athletes singled out?

BILL BALDWIN: The problem isn't college students making money off of football; the problem is professional football players pretending to be college students. We should end the charade of jocks taking geology courses and put all the sports operation and all its profits in a separate venture.

STEVE FORBES: You don't have to have a lot of lawyers on this, what you have to do is have a formula where if you make a certain amount of money as a college football player, like a professor doing a patent with a college, the college gets a cut, the kid gets a cut, have a formula, be done with it.

INFORMER: Stocks sure to be a "touchdown" for viewer's portfolio