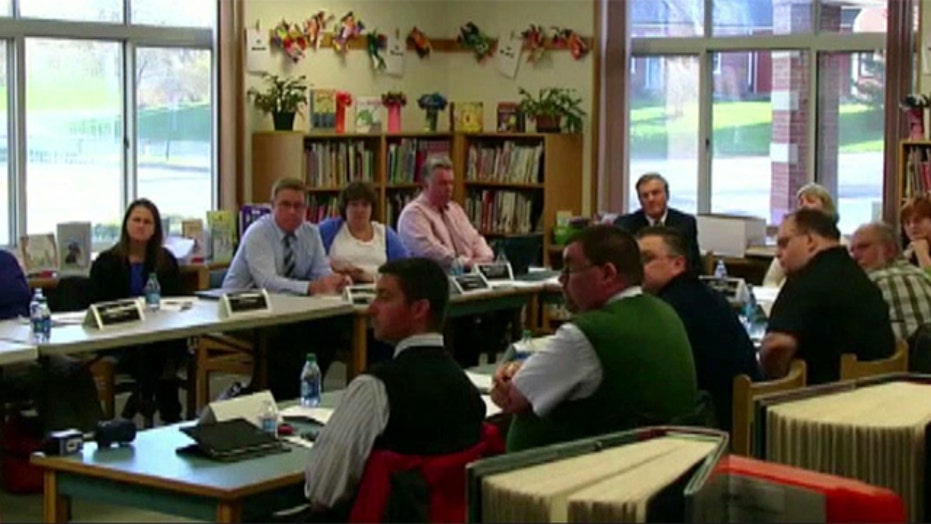 Time for the federal government to get out of our schools?

Despite all the money we keep spending on education, why aren't H.S. grades improving?

SABRINA SCHAEFFER: They are. Our education system is a travesty. People don't realize that spending has been going up for four consecutive decades and our test scores have remained flat in reading, math, and science. Public schools spend 93 percent more than the median private school. I live in Arlington, Virginia. We spend $26,000 per student, Washington D.C., $28,000 per student. So where are the results?

RICK UNGAR: I think you have to be careful not to be too quick to blame the federal government. Where I grew up the education was very much under the local control and parents et cetera and education wasn't much better. Just look at me.

MIKE OZANIAN: Well, David I have a daughter in the first grade in Glenn Rock, New Jersey and the teachers there are fabulous but one of the things they express to me and my wife is they're concerned about losing control over how the money is spent and over the shape of the curriculums and how they can teach the children. Things like common core which are supposed to be to help the local communities, they're really devised by big bureaucracies and federal funding is tied to these programs like common core.

ELIZABETH MACDONALD: Those people pushing for these parents to be arrested. They should be immediately fired and get out of the way. Listen, the state and the federal government, they work for the parents. The parents don't work for them. What's going on here is R-rated books are in the curriculum for 14-year-olds. Those people that do that and put it in the curriculum should be fired. The question is will the one size fits all standard work. They say it won't magically create great teachers and teachers have it hard. The parents need to be more involved with what's going on at the student level. It's unfortunate that that parent in that clip got arrested.

STEVE FORBES: Yeah, the head of the teachers union in New York City was caught on tape telling his delegates how hi helped sabotage teacher evaluations and how he hates reformers. They think it's all for them and not for the kids. That's why you need school choice. Genuine school choice across the board. That's the only way you get accountability. Soviet style monopolies don't work.

JOHN TAMNY: Well, I think that's part of the point. I mean all of this talk about per people spending and teachers unions really does in my mind miss the point. You show me parents interested who send kids to school each day telling them to go learn something and you'll get good educational outcomes. There's all this talk from conservatives and it's correct about how we want to rid society of victimhood but with education suddenly parents and children are victims of bad teachers. I think that's a mistake. Those that want to learn will learn. We have to see more of that if we want to fix schools.

STEVE FORBES: Yes and sadly it's not alone. They make up the rules as they go alone. You see it in other government agencies as well and it comes from the White House. If you don't like the law, ignore it. No surprise other agencies are doing the same thing. EPA is hurting production in this country. Not something we should be doing at this time.

RICK UNGAR: We have to keep in mind there's an allegation that's been made if The allegation turns out to be true, something to be concerned about for sure but this office that this person is suggesting is behaving incorrectly, been around a long time. Didn't come along with this administration, why don't we wait and see what the evidence shows?

CARRIE SHEFFIELD: I think there's more than smoke. I think there's fire and the scary thing is that the inspector general is having trouble doing his own investigations because of what's happening at the EPA. This is the same agency that gave $1 million to a guy who was pretending to be a CIA agent in Pakistan. You can't make this stuff up. It's terrible. And I think one way we can solve all of this is to move the agencies to the communities where they are regulating. So let's move the EPA for example to West Virginia.

SABRINA SCHAEFFER: That's right. This is another example of the regulatory state being used as a political pawn. I'm coming at it from being down here in Washington. I'm seeing all of these tourists begin to come to the capitol to see the sights. It's how dangerous the regulatory state is. The fact is this has serious political ramifications.

JOHN TAMNY: The problem here is the obnoxious conceit that's regulation to begin with. We're asking people that couldn't get jobs in certain industries to regulate those who could. That's why it never works. It's worse than a problem and more broadly, we have to remind ourselves that a lot of these regulatory bodies were created as a barrier to entry to protect industries. So when you look at energy, you say the problem with energy regulation is it keeps out the innovators. Silicon Valley is not regulated and that's why it's a source of innovation. Regulated industries are the opposite of that.

CARRIE SHEFFIELD: Well, she's glib. I have to say that. We have the USDA coming out this week saying we expect to see the biggest spike in food prices in three years. This is something we have to be concerned about. Meanwhile we have President Obama who when he was first running talking about the price of arugula at whole foods. They don't care about the average family budget and he's putting things constricting growth. If we had growth this inflation wouldn't be such a worry right now.

RICK UGNAR: But what a shame that we have to try and find a way to pin this on the administration. Look, we have the smallest herds since the 1950s. Pigs are disappearing because of a bizarre disease going around. We have had remarkable droughts in this country last year and this year. This effects food prices in a very real way. I actually agree with you. I don't think that the fed definition of inflation is right because it leaves out energy and food. But to try and pin this on the administration?

STEVE FORBES: You have the Federal Reserve contributing to the droughts in terms of wanting inflation. We'll see how that plays out in the next 24 months. Whether they'll make a botch of it again. How about ethanol. That's taken millions of acres of land around the world that could be used for producing affordable food. So the government is in there.

SABRINA SCHAEFFER: They are like me. I go to the grocery store. To feed five people it's extremely expensive. The cost of beef is the highest it's been. It's not simply the administration. It's a lot of the progressive activist groups. All of the labeling laws are costing money.

MIKE OZANIAN: Rick is wrong. The number of pigs hasn't diminished. They just all moved to Washington D.C.