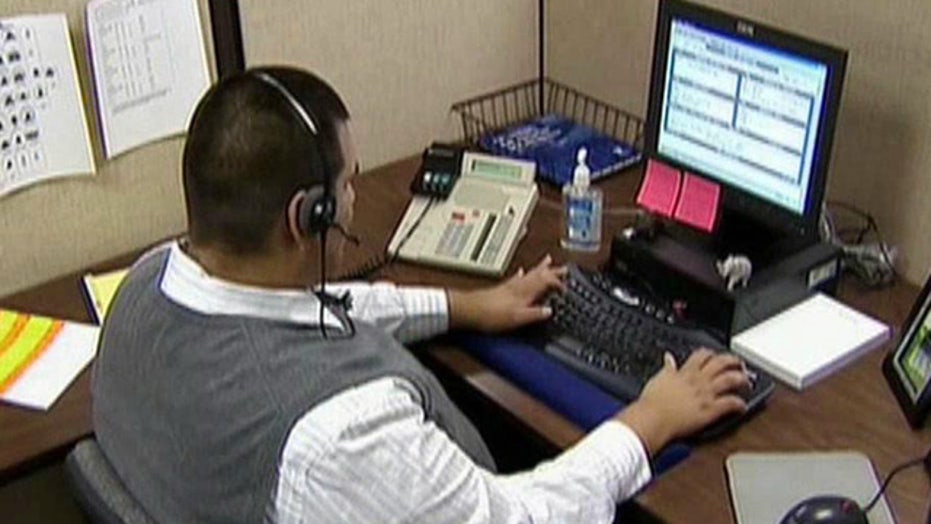 TRACY BYRNES: Well, you take a part of time work hoping you become full time eventually. We are not seeing that rollover. We're just actually seeing the number continue to grow. People are taking part-time jobs for economic reasons, not because they want to work part time. It's entirely different. That's not what we are seeing. Blame health care costs. Blame payroll taxes. Employers don't want to take on more full-time employees right now. Unfortunately, that will hurt us down the road.

JEHMU GREENE: There's some good news in the jobs report and there's some bad news. There are actually an equal number of folks who involuntarily got part-time jobs in equal to the numbers that voluntarily got part-time jobs. A number of those are due to the fact they're no longer blocked into jobs because of health care. The other thing is you have half a million people who have entered the work force, so they may not get that job they wanted in the beginning, but it is a good thing they have now re-entered and this may be their first, the first steps that they're taking to get in. It's good and bad.

GARY B. SMITH: Well, I started laughing because Jehmu makes a distinction between voluntary and involuntary. A person who voluntarily takes a part-time job, it's a person that can't get a full-time job. They go, yeah, i'm take the part-time job if that's the best I can get. Thank God for ObamaCare for freeing up all of us citizens to work part time instead of full time. It's been a blessing. I can paint. I can do all the things I couldn't do before. Tracy makes a good point in that most people take a job with a company hoping to work their way up through the ranks. It gives them a sense of community. It gives them a permanence. It gives them a location to call home, if you will. It starts for many a career as it did for many of us on this panel. But the other thing is, part-time workers generally lack benefits, things like paid vacation. They lack things like health care. They lack things like pensions, 401-k plans. Being a part-time worker is fine if you are in college and trying to pay for your education on the side. It's not good if our work force increasingly moves towards that. That's what companies are having to do, because quite frankly, they fear ObamaCare and they fear what's happening with this economy.

JOHN LAYFIELD: Well, I think the economy has added a lot of jobs. Most of those jobs have been lower paying jobs. We are still down below the number of jobs that when President Obama took over. We are still down about a million jobs overall. So we have high structural unemployment. Jobs that we've added back have been lower paying jobs and they have been jobs that are part-time. Look, in parts of the country where you have fracking, we don't have to worry about unemployment. We don't have to worry about minimum wage. We don't have to worry about overtime. Because of the fact they have allowed this to take place in their economy. We don't have a national energy plan. We don't know where fracking fits in, pipeline fits in. If we had something like a national infrastructure bank, which has got bipartisan views, both supported. Every $1.2 billion spent in infrastructure creates 35,000 jobs.

JOHN LAYFIELD: They work less than 120 days. There are 268 millionaires in Congress. The average congressman is worth over a million dollars. I don't get this; they have a five-week vacation in August because back in the day, the air conditioner didn't exist. They had to take off. So when it exists, they said, we won't work anyway. They don't produce anything. These are the most overpaid buffoons I have ever seen in this entire world and I have been to all seven continents.

GARY B. SMITH: Well, exactly, Brenda, and I hate to take the other side from John in this one. They've taken a 30 percent pay cut in the last 40 years or so. So, if you say they were overpaid now, they were dramatically overpaid in 1970. Yes, they're buffoons, one of the reasons is we're not paying to get better people. John would make a great congressman. I am positive he could not afford the pay cut to be a congressman in Texas. That's the fact of the matter. You will not offer John the millions he makes now. I grant that, but they need to have something to attract better and brighter people.

TRACY BYRNES: No, that's the problem. Thomas Jefferson said, go and do your time, go back to your darn farms. You don't belong here for life. This is the problem. They think it's a career. It is not. It's like philanthropic work. Go help the country and go home. That's why we need term limits. If you take the money factor out, you actually might get something done. If you are looking at who's got more money, who makes Forbes richest list, the whole thing gets diluted. They're not focusing on why they're there. I think it's laughable that he said, ‘We're the board of directors.' They don't know anything about financing, accounting, oh, but we're the board of directors, there's our problem.

JEHMU GREENE: You are right. And I certainly think that regular Americans need a pay raise before members of Congress, so let's pass the minimum wage and get out of this low wage economy. But these members of Congress do have to have two households. They have to have one in DC, one in their district, and DC is one of the top five most expensive cities to live in this country. I don't want them on someone else's payroll. I want them on our payroll, not on a billionaire's payroll, not someone who they will owe favors too. And we're already seeing that with campaign financing. We need more people not wealthy representing us. Ted Cruz said the other day, we need more farmers as elected officials and I believe it was Mitt Romney's dad who told him, don't run for office, if you have to get elected to pay your mortgage. We need people who are not millionaire.

GARY B. SMITH: I'm all in favor of a mileage tax, easy enough to do. Most of us have those readers when we go through the E-Z pass. I think you could do that very easily, but on top of a gas tax? One of the problems with a gas tax, at least the federal level is, the money is wasted. We go to build like bicycle paths and the bridge of nowhere. It's another slush fund. What we should do is have a mileage based tax. Which the government by the way takes right at the refinery level and just go with the simplest way to tax usage.

JEHMU GREENE: No, this is a regressive tax. We need progressive taxation, so you are not affecting regular Americans. We need the folks who do well in America to do well by America when you look who drives to work longer distances, it's going to be people who are making less money. They're not the ones who own a condo in the downtown area and can stroll.

TRACY BYRNES: That's not a reason not to tax, you have to stop this nonsense. This is so old. They drive too - they might have drivers, but they drive too. You want to smack us again at the state level? Oh you're doing a push for these fuel efficient cars, so they're losing money one and trying to making it up on the other. Why don't you just let me drive my big ol' truck and leave me alone?

JOHN LAYFIELD: I think Gary B. is right. The problem with the gas tax is it goes into a slush fund, and it's being used for all kinds of things other than what it's designed to fix. The idea of this aggressive tax, there is no facts behind that. People that are poor in inner cities take mass transit to work anyway. The people that tear up the roads are your truckers who work for big companies. They're the ones that should pay for the usage. I think this is a usage tax. I like the gas tax. The problem with the mileage tax is you are adding an infrastructure into cars, gas tax penalizes those who use it more or rewards those with a fuel efficient vehicle.