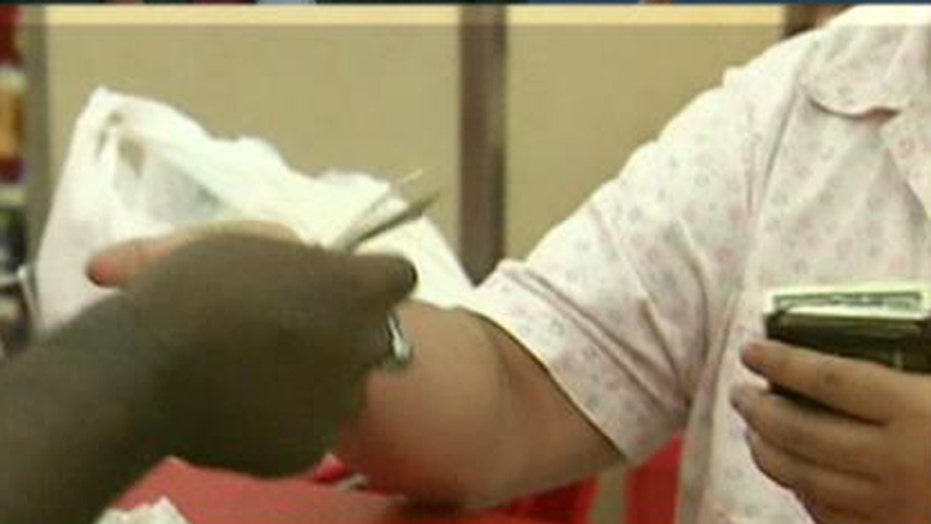 IN FOCUS: Several states that don't have income taxes now have a budget surplus

JOHN TAMNY: It would be great for the whole country. One of the biggest scandals of all time is not our deficits but the fact that our federal government collects $2.5 trillion on an annual basis and more. With a consumption tax or a sales tax this is the lone way we as Americans can limit how much money gets to the federal government. Limiting it, more businesses would be created, more jobs created, plus the federal government would not be penalizing our work. With it not being penalized, we would get more work and more jobs.

RICK UNGAR: It sounds wonderful; Here's the problem, I'll give you two reasons why this doesn't work and I won't even touch on the incredibly aggressive nature of this. Number 1, you want to put the brakes on an economy that's starting to coming around, imagine what would happen here. First of all, to keep this revenue neutral, you're looking at a 20-30 percent sales tax to replace what we raise in income tax. Add that to the state tax that Gov. Jindal wants to add, 30 percent added to the cost of buying goods, no one is going to be able to afford it, no one is going to go shopping.

STEVE FORBES: You're absolutely right. There are 9 states that don't have personal income tax and as a whole they do far better than states with income taxes. Compare the state of Vermont with the state of New Hampshire, New Hampshire has no sales tax and no personal income tax, it has done far better economically over time the neighboring state of Vermont, which is a so-called progressive state. On the national level, I do have to put a caution, you better change the constitution, or you're going to end up with what most states have which are an income tax and a consumption tax. You have to get rid of the 16th Amendment. We have to change it or we are going to get the worst of both worlds.

MIKE OZANIAN: I don't like sales taxes because we have seen this experiment in Europe with vats; they're a terrible idea. They are more onerous than income taxes. They are very sneaky too, particularly vats because they get put in every element of sales so you don't really know what the true tax rate is of the cost and Jindal's program is basically to replace one source of revenue with another. So it doesn't do what John Tamny would like and what I would like which is to reduce the amount of money that flows to the government.

RICH KARLGAARD: I'm in favor of it at the state level, the question you asked about Steve and experimentation, boy! One of the beauties we have in the United States is that we have 50 states and the 50 states are free to try different revenue raising methods in addition to New Hampshire vs. Vermont, you have the state of Washington vs. the state of Oregon. Washington has no income tax and it's doing quite a bit better. These things work at the state level but Milton Friedman is absolutely right. At the national level, it just wouldn't work. It wouldn't work for a variety of reasons, among them, the constitutional problems.

ELIZABETH MACDONALD: No, I think it would translate to the federal level. Our federal income tax system is a disaster, like Rand Paul said. It truly has made more liars out of the American people than golf and what we are talking about is essentially a system that's been simplified beyond all understanding. What we are talking about is a sales tax, not a vat. We are talking about the sales tax, it is called the fair tax, and what it means is yes it could hit consumption, it could start at 17 percent, Rick Ungar makes a great point, state and local would have their own tax systems, and it would also make a competitive healthcare market. Here's the problem, the senior lobby would really lobby hard against it because the seniors have already paid their income taxes. When they start spending their income into a sales tax boy they would be really upset about that.

STEVE FORBES: Sure Walmart means more products, more choices, lower prices and more jobs because it allows people to keep more of what they earn. You get more commerce; Walmart is able to do this because of productivity. That's what this country is about. Going against Walmart is like saying ban iPods because they away with music stores come on now.

RICK UNGAR: Let's talk about what really happens here. Walmart moves into a community, mom and pop small businesses go down the drain. With them, goes employees who are making a decent wage, who only have one choice. They go over to Walmart where they get paid substandard payment and they end up barely getting by. It's not just the unions who are complaining about this in Newark, it is a whole host of people in that city and it's because they don't pay a liveable wage.

RICK KARLGAARD: No and you know something even bigger here is that one of the common problems in poor urban neighborhoods is the lack of access to good grocery stores. You just can't find them in poor urban neighborhoods like much of Newark. Wal-Mart 100,000 square foot store that they planned in Newark is going to have a grocery store. If we are going to talk about the healthcare crisis, we have to get good food and make it affordable to the people who don't have that choice right now.

BILL BALDWIN: That's lovely, let's get back to the jobs picture. I think unions understand what the score is. Walmart is going to eliminate 250 local existing retail jobs and replace them with 200 new retail jobs. It's a job killer, which by the way is a good thing. It's only by killing jobs that innovators like Sam Walton were able to do more with less. That's what the standard of living in this country is all about.

ELIZABETH MACDONALD: That's right and talk about keeping score, unions are keeping score on this union. The food workers union that is trying to unionize Walmart is so corrupt and has so mismanaged their pensions, that they need the Walmart workers to keep their pension funds afloat. That food workers pension is in crisis. Rick you can shake your head all you want, the governments own filing show that they are 40-50 percent underfunded for that union. The union has used union dues for corrupt gifts and political donations, lobbying and trips. The officers of this union have their own 401k and profit sharing plan. Why don't their own union members have a 401k? They don't.

JOHN TAMNY: If Walmart was the exploiter that Rick presumes, why do people line up to get jobs there wherever a Walmart opens up? This is so basic. Would you rather an apple store open up next to you, or a Blockbuster video? I think we know the answer. When Walmart moves into a place, it attracts other businesses because Walmart is a winner and a symbol of success. If you keep Walmart out, you will keep a lot of other job creating businesses that will not want to go to Newark to begin with.

MIKE OZANIAN: I think it is a silly code to have but it is a code and when you have something in the law, the law has to be applied evenly to everyone and they should be forced to follow this law. Down the road, change the law so you can grow your veggie garden.

STEVE FORBES: This shows the idiocy of government, no common sense. They can't make a distinction between a vegetable garden and raising pythons in your front lawn or having a toxic waste dump. Come on now, they say it doesn't enhance property values, let the market decide that.

RICK UNGAR: Wait a second, Steve just said let the market decide. Guys, this is more me, me, me stuff. Their neighbors, the people who are objecting to this, bought a house in a neighborhood with manicured front lawns and you know what's happening to them now? By the way, I sent a friend of mine over to look at this; it's not a vegetable garden, it is a farm in front and it is completely out of place. So what happens when the people who bought their house next door, their property values have gone down. He should let the market decide if he should take a hit?

ELIZABETH MACDONALD: What's ironic about this is that Orlando where this is happening professes to be the greenest city in America; I think that is really funny. If they were growing corn stalks, if they had hay stacks in there, I would be really angry about it. If you are going to get rid of this garden in the front lawn, then you get rid of the garden in the White House in its backyard.

BILL BALDWIN: With the exception of rules against noise, obnoxious emission all zoning in the United States is either corrupt or stupid. This falls in the stupid category.

Informer: Stocks getting ready to run up to new highs