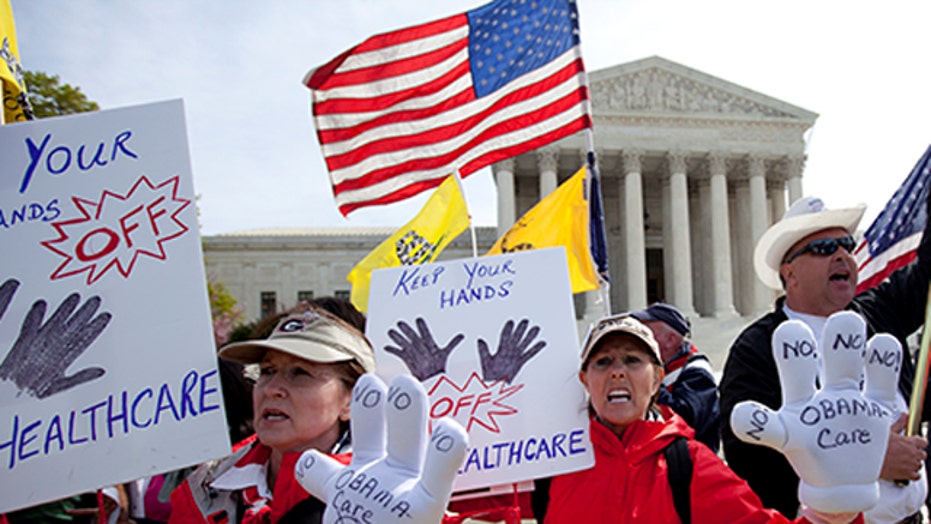 Taxpayers on the hook again?

Congress, unions and health insurance companies may be getting breaks from the health care law, a DOJ briefing says the government knew that up to 80 million Americans could lose their employer-provided coverage; where's the break for them?

RICH KARLGAARD: We should have seen this coming and in the same 2010 President Obama said that in the run-up to the congressional elections about rewarding your friends and punishing your enemies. So Obama's friends get these breaks. Young people overwhelming supported Obama and even young liberals are very intolerant of technological incompetency, which the health care program has exhibited and hypocrisy. This hypocrisy issue hangs over the health care issue like a dark cloud. You cannot treat people differently; it creates a hypocritical situation for Obama and I think it will tank the whole project.

RICK UNGAR: The President said this week there would be no bailout for insurers. He still has not come close to agreeing for the $63 a head for the unions and if the perk you are referring to in congress is that the employer is going to pick up a percentage of their cost than that is the same perk that everyone here gets.

ELIZABETH MACDONALD: A lot of those unions already got waivers over 1400. Let's go through the boondoggle that health care is turning into, the employer mandate has been delayed, the drug companies got a lot of help. Gone is the income verification tax credit in exchanges. The Waldorf Astoria for politicians in congress get a special hotline into the insurance companies and special help on capitol hill, like how they got an IRS agent on capitol hill helping them out with the tax return laws on the ones they wrote. The irony is that the tradeoffs that are going on for this whale of a bill, the whole bill is built on tradeoff meaning that the upper income people have to help out the lower income people. We get it; we want to help the uninsured. But is this the way to go?

SABRINA SCHAEFFER: He is losing political capital but what I think is good that is coming out of this mess is that people are seeing the result of progressive government that deems itself God, choosing who will flourish and who will fail. It's what Michael Cannon at the CATO institute said, "we have turned into a country where we have the ruling class against the rest of us.' Bottom line is that ObamaCare is for the commoners but the problem is that the commoners are facing loss of insurance, increase in premiums, insecurity, not knowing if they will have insurance or not, loss of jobs, loss of hours on the job, so there is real problems here.

MIKE OZANIAN: I would like this concierge service that these congressional aides get to help them weed through everything. If you are really wired in and you're one of these big political guys or one of their aides, you get helped a lot during these times where a lot of people are having trouble navigating the site. We see the preferential treatment.

JOHN TAMNY: They won't believe Obama and this was inevitable. All federal legislation inevitability has handouts preferred constituents. The beauty of this is that all these exceptions have rendered the law totally unworkable. Obama is the gift that keeps on giving because he exposes the lie that is compassionate government on a daily basis. Thank goodness he has a few more years to expose that this will transform this electorate in 2014.

ROB FORD AND TREY RAGEL ADMIT TO COCAINE USE, MANY SAY THIS WOULD NEVER FLY IN PRIVATE SECTOR, SHOULD THESE PUBLIC SECTOR LEADERS BE FIRED?

ELIZABETH MACDONALD: Fire him! Here's the deal, Congress can do it, Article 1 section 5 of the constitution can expel. I'm tired of the double standards. We are jailing people for drug use, I get it, I understand the pain of drug addiction, I feel for him and his family but we deserve better with our elected officials and I'm tired of the Anthony Wieners and Elliot Spitzers still trying to stay in office. Enough; do the right thing and step down.

JOHN TAMNY: The bigger question is why we allow politicians to legislate private decisions. The drug war has been a miserable expensive failure that is imposed on our liberty. If voters don't like drug use, let them vote these politicians out. Let's not pass another law empowering government to do something else.

RICH KARLGAARD: We go overboard in our society prosecuting people of small amounts of drugs, but that's not the issue. The laws are on the books whether you like them or not. I think that public officials should be held to a higher standard. That almost seems impossible right now, but the very pillars of the civil society depend on such.

SABRINA SCHAEFFER: You are. I love the idea of this, but corruption and scandal is as old as itself. We all know the fable; the scorpion will sting no matter what he promises the frog. The bigger question is, why can't we attract more people to public office? Trying to root them out is a waste of all of our time. We have to look for better people to run for office. I tend to think let's let the people fire them at the next election.

RICK UNGAR: First of all, I'm actually with you on what you said about Mayor Ford. I don't get that at all. You're right, if that call comes at 3:00 in the morning, this isn't the guy I want to count on to be ready to handle it. I actually have bleeding heart liberal love for the congressman even though he's a republican. From what I know, there's extenuating circumstances, let's give the guy a shot. But here's what's fascinating to me, there's no mechanism to fire him. There's no recall of a United States congressman in the constitution. There is no opportunity in Toronto to recall him. It has to be done by the state government. Shall we not be addressing that issue?

JOHN TAMNY: This is silly. It's the American left at their self-righteous worst. If individuals want to live in low-energy houses, be my guest. But back in the real world, we're not running out of energy. We're never going to run out of energy, so the rest of us will live how we want without the self-denial that makes some people feel good. And it's a small percentage at that.

ELIZABETH MACDONALD: This is like carpooling where your passengers never leave your house. We should all get together and have Rick mow the lawn. Only Rick has to do the household chores. Here's the deal, everyone lives together. Get this! Indoor air pollution is such a problem to cause sickness multifamily homes.

MIKE OZANIAN: Your problem is the same one John has. Both of you think we live in a capitalist country still. We don't. We live in a country where basically we are moving toward socialism, but my solution is this, all those who think we need these tiny little homes, please, you be the first ones to move you and your families into them. Then after a couple years, tell us how you like it.

RICK UNGAR: Our whole concept here is based on back in the days when they were worrying about driving to work from the suburbs. That's not what this is about. This is planning in San Francisco because they expect more employment that begins to rise there and they want to plan the housing. Guess what? Nobody's going to make you buy one.

SABRINA SCHAEFFER: That's right and we know that President Obama has been interested in trying to contain the way people live since his days as a community organizer. I live in one of those small houses already. I know why people drive from the suburbs, but people should think about where this could go to. Has anybody been to Manila in the Philippines? We are talking a million and a half people living in under 15 square miles. There are environmental impacts, but there are also noise and health concerns.

RICH KARLGAARD: You know, I think one of the great virtues of the U.S. is we have 50 states, multiple cities, and we get to conduct these experiments. It might appropriate in the San Francisco bay area. I'm a country mouse; I like living in the suburbs myself, but if you don't like it, move somewhere else and vice versa.

In honor of Thanksgiving holiday, please give our viewers stocks to buy now, so they can be "thankful" for them later.