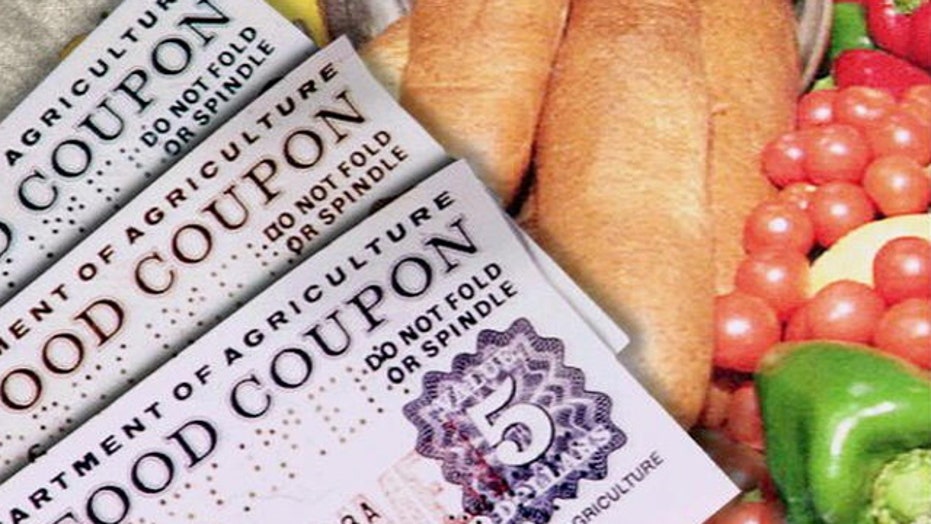 IN FOCUS: Newark Mayor Cory Booker goes on food stamps for a week

JOHN TAMNY: Well the unemployment rate is still abnormally high, and I think we also know that that unemployment rate obscures a lot of people who have left the workforce altogether who are no longer counted. As for politicians encouraging that, that's a really horrifying notion. The idea of going on food stamps is an idea we should always try to avoid. It's something that should be so painful that we only go on them for a brief time so that there is an incentive to get back into the workforce. Politicians are doing the reverse and it's something we should look at more seriously.

RICK UNGAR: I would take some exception to that. I don't think this is about promoting food stamps; this is about getting the information out to people who need food stamps so that they know they are there to get them. To John's point, I think there is a lot taking place here that we need to recognize. Unemployment is coming down; we had some surprisingly good news this week on that factor. There will be lag between that coming down and people being able to make the switch off of food stamps and get back to work.

VICTORIA BARRET: Absolutely. The scary thing to me is that this is building over the last decade. So we can talk about this as a phenomenon of the recession. When you look at both President Bush and President Obama we have seen a really unprecedented rise in the food stamp program to the point where this program is so large, it's also supporting a large bureaucracy that wants to fuel its growth. It's $4 billion in administrative costs. Those people don't want to lose their jobs either. So I don't think this is going away unless we have a frank discussion about it nationally.

MORGAN BRENNAN: I think that's a great idea and we could have an entire debate on that. Let's go back to food stamps for a second and this idea that government is promoting food stamps. We have a farm bill that's actually kicking around congress this week that proposes $4 billion in cuts to the food stamp program over the next decade. The agricultural chairwoman actually said she would be open to larger cuts. Whatever you want to say about food stamps, our government is taking measures to try and scale it back.

RICH KARLGAARD: Victoria properly describes what you can call the welfare industrial complex. Once it gets to a certain size it begins to look on behalf of itself and that's a bad thing. We really have another crisis here that is related. We have a growth crisis. We are growing at around 2 percent, we should be growing at 4 percent annually, if we were and we had the right tax and regulatory policies to liberate job creators to do that I don't think we would have this food stamp crisis.

BILL BALDWIN: I don't think you should be shocked that self- perpetuating bureaucracies engaged in advertising and promotion to justify to their constituencies what they are doing. Let me give you an example, the New York City subway system used to have posters written in Spanish advertising a gay lesbian domestic violence Hispanic hotline. That is how fine grained it gets in New York City. New York City, on the subways, pushes welfare programs at people. Yes it informs them but it also pushes it on them.

VICTORIA BARRET: I think it's a freighting society, one where business owners can't speak their mind and say yes taxes do hit their bottom line. Yes they might not hire because of higher taxes and health care costs or they might put workers on part-time instead of full-time. We want to know if this stuff is going on. I also doubt if it is really hurting their earnings. I don't think the backlash is that large. Yes everybody should be allowed to speak their mind. That's a healthy, flourishing democracy right?

RICH KARLGAARD: My heart tells me to agree with Vicky but my mind says that CEOs have a first duty to increase the value in their company for the owners who are the shareholders. They really can't do anything irresponsible and putting out their political opinions. If it's going to cause damage to the value to the company is simply the wrong thing to do. If they have strong opinions on a subject they are other ways that a publically traded company can communicate.

JOHN TAMNY: Rich is absolutely right, CEOs do work for shareholders that's their first allegiance. I think in this case, speaking out against Obamacare which is a very substantial cost that will weigh on profits is something they should do. It is pro-profit to talk about a law to let the nation and lawmakers know what is going to cut into profits. I think in this case, they should speak out. I question whether or not lower sales are solely related to speaking out on Obamacare.

BILL BALDWIN: John and I could make a point on buying our hummus from whole foods because we support the libertarian policies of its chairman. There is a cost to that; for every 2 of us, there are 20 people who follow Rick Ungar's web blogs and say ‘gosh, the guy who applied the pizza topping to that pizza chain voted Republican once, lets boycott him! It cuts both ways. I think chief executives should be quiet.

MORGAN BRENNAN: They are and unlike the Kardashian clan, bad press is bad for business, and Papa John's is a great example. Their CEO came out earlier this year and said that Obamacare is going to lead to 14 cents more per pie and actually one of our own Forbes reporter, Caleb Melby, did the mathematics here and found that it was actually a much lower number, 4 cents per pie and since then, their CEO has backtracked. It makes the company look silly and greedy and I think we are seeing that blowback. That's bad press.

RICK UNGAR: With all due respect, every one of you has missed the point. People are not angry with what these people are saying, they are very angry about what these CEOs are doing. Darden was not saying that we have lost money or we are projecting losing money because we said the wrong things, their customers got upset that they were trying to take out their corporate responsibilities by hurting their workers. Guess who their customers are? They are working people in this country. We aren't going to let them get away with it and they can get quiet about it, we are still going to write about it.

RICH KARLGAARD: Well Rahm Emanuel who is now mayor of Chicago had a famous phrase when he was working for President Obama- ‘never let a crisis go to waste', how do you let a crisis turn into a political advantage? Global warming, anyone can go on Google and ask the question how much is the planet warmed up? The answer is 1.3 degrees fahrenheit over the last 100 years. Nothing since 1998. So to blame Sandy on global warming is a real stretch.

RICK UNGAR: All the mayor was saying - guys there isn't a government consipiracy behind everything that anybody does. All the mayor was saying was that we are going to have to rebuild in the areas that were destroyed and we are going to do it sensibly so that as we have more of these storms that is being projected, we won't have to keep rebuilding every time these things are destroyed. I don't see why you have an objection to that, I truly don't.

JOHN TAMNY: This is just such a cynical act. If war is the health of the state then natural disasters are the states oxygen. The reality is that climate by definition by being climate is constantly changing and so to use that as an excuse to try another Keynesian stimulus program amid a tough economy is not only wrongheaded, but it's cruel and I'm surprised Rick would actually go for this, actually not that surprised.

VICTORIA BARRET: Bloomberg is trying to be somewhat sensible here and saying ‘hey we have to rebuild, let's be smart about it' I have no doubt that politicians including Bloomberg will use this as a climate change moment and ask for funds towards research, towards building different ways. There's part of this you go ‘yeah we should be smart about this next time we build' but looking at a history of hurricanes in the New York area, you wouldn't think it was safe place to live right? The city has had lots of hurricanes and lots of damage over centuries. So yes, the climate is always changing and this is nothing new.

BILL BALDWIN: It may not be a factual trend, but it's a political trend. I think we are going to see Sandy turned into a carbon tax. Politicians use every disaster as an opportunity to increase their power, their revenue, and their self-importance. You know who else does that? Journalists do it.