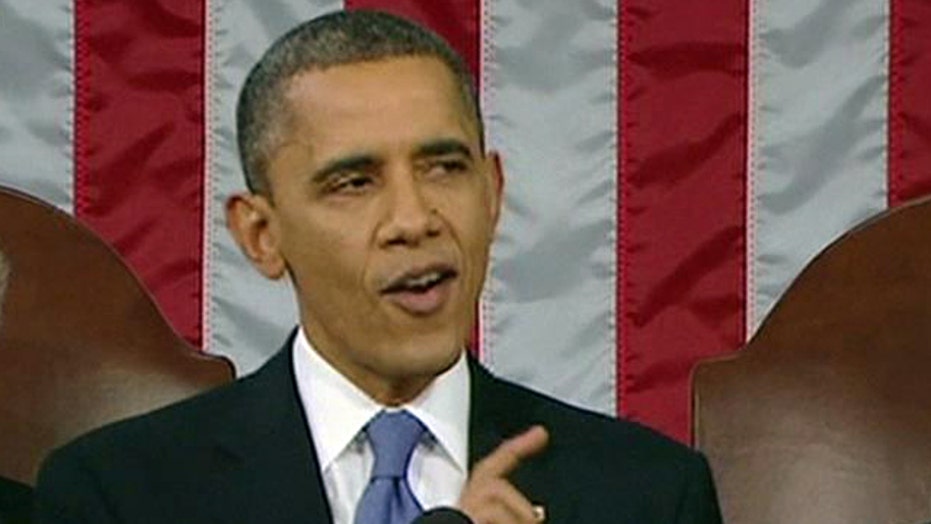 Shouldn't DC be looking for areas to save money?

IN FOCUS: President Obama calling for $2B in green energy spending

STEVE FORBES: Green energy is a great way to save green dollars. If green energy had any promise, entrepreneurs would be on it, they do take a long-term view. In terms of clean energy, we have it in our own backyard with natural gas. If we remove obstacles for that, we will have all the clean energy we want and need and export it to the rest of the world.

RICK UNGAR: I found a quote that speaks to this point better than I could ever hope, so I'm going to read it quickly, "federal investment in science and basic research has led to numerous innovations and commercial successes from lasers to MP3 players, and from the Internet to MRI scanners." Do you know who said that? Mitt Romney from his book "No Apology, The Case for American Greatness." That is the point, government has always been involved in our greatest progress, and they are always going to be involved. All the things we count on today, government played a role in. There have always been sad sacks and the naysayers who want to not move forward and leave things as they are. These investments are critical and by the way, the actual losses that we have sustained in this clean energy supporting programs, 3.6 percent have gone wrong, that's about a third of what the estimate was at the outset.

MIKE OZANIAN: With my research, I found 14 failing solar companies that have already cost taxpayers over $3 billion. If President Obama wants to play adventure capitalist with taxpayer money, he should remember that the type of progress that Rick is alluding to is an early stage of R&D, it's not in giving huge vast sums of taxpayer money for companies to operate and have tax credits forever. This is the biggest problem for Obama. The private sector which would buy these goods, doesn't want them.

MORGAN BRENNAN: I'm going to stay away from that issue but what I am going to say is yes, we are seeing a lot of waste and I think there is a lot of room to streamline that waste but I don't think we should be cutting off all green spending. Going back to President Obama and what he pitched this week in his State of the Union speech, he's talking about a $2 billion clean energy transportation fund. Yes he is talking about electric vehicles; I have my issues with those but he is also talking about natural gas and domestically produced bio-fuels. If we want to compete on the world stage against China, or India or Brazil, than we do need to be looking those areas of clean energy.

RICH KARLGAARD: He makes half a point, but the structure is all wrong. So many of the examples that Rick talked about, chiefly the internet came through military R&D. Military R&D works because there is a sense of urgency, there is an existential threat. When JFK said we are going to put a man on the moon at the end of the 1960s, the reason we were able to do so, and leap ahead of the Soviet Union, was because of the semi conductor companies in Silicon Valley. Yeah, the military bought a lot of the semi conductor chips during that period, but guess what? These were privately funded companies and they had P&L's they had to worry about and that's the key difference between these green technology boondoggles.

ELIZABETH MACDONALD: The ones we have now are boondoggles, I agree with Rich. Technologies that seem to be working coming out of the government come from NASA or the military. That's what we see working. A lot of spaghetti taxpayer dollars thrown at the wall. What we are seeing now in the markets, markets don't want electric cars, and they don't want these electric battery cars. It leaves them feeling that they are going to be stranded in the woods without any gas or power to get out of the woods. It stresses them out and we talk about natural gas, yes it was helped by the federal government, but that was a resource that was sitting there. Electric batteries have to be developed by people with a lot of taxpayer money.

FLIPSIDE: University in Michigan to repay graduates' loans if they fail to secure good-paying jobs

JOHN TAMNY: It's a terrible idea, and it's very anti-college student too. What you want senior year, realistically, is to be scared to death that if you can't find a job, you can't pay off student loans. Here's a program that tells students, don't worry about happens senior year, worst case if you don't get a job we will cover your down side it's so anti- student, it's not going to go national, there's no way.

ELIZABETH MACDONALD: I love this idea, I think it's great. Finally a private college stepping up and saying "let's think about the American family, let's think about the students first." I wish other colleges would cut tuition first and not gauge American families. I think this only works at the private level because we have got these public universities operating on the taxpayer nickel. I don't think the taxpayer is going to go for that.

STEVE FORBES: Well they have a right to make that experiment but why don't they use that money to cut the tuition in the first place and not have to find the better paying job. How about getting more bloat out of that college? I'm sure there is a little bit, but out of the universities which have expanded in terms of their administrative costs because they are subsidized by the U.S. government. By the way, all of this might be academic, as online education comes on and you can get for $1,000 what you are now paying $50,000 for.

MORGAN BRENNAN: I am and I will be for the next 25 years so I am all for this concept. I would even take it a step further and shift it back over to the government like we have seen this idea of loan repayment contingent upon income like we see in the U.K. and Australia. I think there is a lot of accountability that is lacking on the graduation end of student education. I think more than that, so many of our students are getting educated for jobs that don't exist instead of the ones that do.

MIKE OZANIAN: This is an idea that must have come from the Obama administration because it pushes his two favorite things; the redistribution of wealth, and disincentives to work. Why am I going to go and look for a job when I know that somebody that has a job and has paid tuition at the school is going to help pay for my tuition as well. I don't like this idea at all.

RICH KARLGAARD: For this little private institution, it's a Hail Mary pass. Steve put his finger on the main issue, online education is going to blow away 25-50 percent of all colleges over the next 10-20 years, so why not let them try it? It's a private institution, if the donor base doesn't like it, they will let them know soon enough. Draw the line at a public university, but at a small liberal arts college, private college, why not?

RICH KARLGAARD: Because they are fake jobs, they are jobs that don't lead to other jobs. What we should do is create enterprise zones that Jack Kemp always talked about, low tax rates and so forth to incentivize business to come into these bombed out places where there has been tremendous job loss and thus you see all these mortgage foreclosures. What we need is real economic growth and its employers that create jobs, not the government.

RICK UNGAR: You are absolutely wrong, my hometown of Youngstown Ohio, you have seen this in action, this really happened, they did exactly what the President suggested. The tore down all the urban blight, they created parks, they created commercial buildings, they have improved residential; they have come so far. Three years ago, Forbes called them one of the greatest dying cities in America. Today, the President is talking about them in the State of the Union, they are turning a corner. This actually worked. I'm happy to take you all with me next time to see it.

MORGAN BRENNAN: I love the concept of this in theory, but we are a day late and a dollar short. We are all seeing the private market all over this, about $10 billion estimated by J.P. Morgan from the private sector going into these types of projects already. We have lost about 2 million construction jobs in the downturn, we have seen 300,000 added. If you look at where they have been added, it's in new home construction and in trade contractors. So we are talking about remodeling and maintenance of buildings already existing. You want to create jobs? Create jobs around infrastructure because those are the construction workers that are still out of work.

STEVE FORBES: Sure and the people in the private sector will do it a lot faster and a lot cheaper than the government will. The reason why Youngstown is turning around is because Ohio has a republican governor who is pro business.

JOHN TAMNY: Well yeah I'm listening to rick he resides in the seen of the world. He sees those jobs created in Youngstown and says ‘Oh wow look what the government can do' But the unseen are all the jobs that will never be created because good ideas will be starved of capital so that bad ideas can receive it in abundance. Yes they will spend the $15 billion on jobs to be created in one area, but at what cost?

Mountain Dew has a new "breakfast" drink called Kickstart. Tell our viewers which stocks will "kickstart" their portfolios.