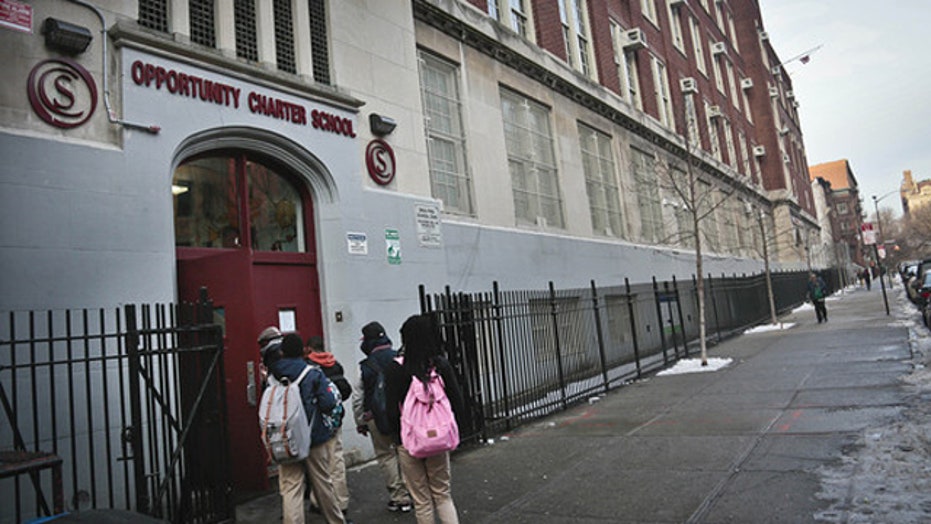 Parents fight back against push to close charter schools

Unions cutting off only option for real change?

Should teachers unions be giving money to anti-charter school groups like NYCC and AQE?

STEVE FORBES: Absolutely, David. That's why parents are so adamant about it. They want them to have a ticket for the future. I'm here in Chicago; out here the mayor is in favor, Rahm Emanuel, so kids in Chicago, 13 percent more than in New York which is 6 or 7 percent. Out here the mayor knows they are a ticket to the future. He is a great fan of them. So the more charter schools the better. And at least one mayor out here gets it, even if Deblasio in New York does not.

BRUCE JAPSEN: Well, that's part of it. I'm out in Denver for health care conference, but one of the things going on in Chicago where I live is that they closed 50 schools and the mayor does get some credit for opening charter schools, but he's only opened a handful and the unions in a lot of people, the taxpayers are asking questions saying you know, who is owning these schools? Are you just doing it for cheaper labor? So the unions are right to ask some questions here about the motives on why the charter schools are being opened in the first place. And also who owns them? Are they -- who is owning these schools?

ELIZABETH MACDONALD: Full disclosure my niece works for a charter school. I've got public teachers in my family too. Who is backing them? People who want change. People who want taxpayers to stop being abused by public service sector unions like the teacher union who have no accountability. I'll tell you the teachers in my family had routinely said that the name of the game if you are a public school teacher is get your vacation days paid for if you don't take them. Your holiday days paid for if you don't take them. It's about accountability. Charter schools work, Stanford University analyzed it. Poor families love charter schools. Even the poor families saying if the charter school shuts down we don't want our kids in unsafe public schools.

RICK UNGAR: This is a very hard one for me to argue against because I'm a very big fan of the charter schools; I'm going to acknowledge that. So maybe I can inform instead. What you've got going on here is a battle within the Democratic Party. You've got the teachers unions terrified they are going to lose membership and people like the president and the secretary of education Arnie Duncan who very much support charter schools and to speak to Bruce's point I have to say, I don't care who is running them. Some are for profit. The bottom line is when you look at the performance numbers the charter schools, the kids are doing better.

RICH KARLGAARD: Well, the parents overwhelmingly want them. I'm so glad that Rick pointed out this fissure in the Democratic Party. You have people on the right side of this like Rahm Emanuel, Governor Cuomo in New York and then you have people like Deblasio and part of the reason his polls are plummeting he is on the wrong side of this. How could you be against parents wanting their kids to get out of the cycle of poverty by getting a real education?

JOHN TAMNY: Yeah, I mean, I may not like it, I can see why teachers are defending their turf, however wrong it may be. My only problem with this discussion is that too often all of the criticism is on teachers and teachers unions, and not nearly enough on disinterested parents and kids who show up to school not caring about what they are going to learn. I don't care what teachers you get, I don't care about the reforms, if kids don't care when they show up, schools will perform poorly.

Delayed HEALTH CARE deadline just a couple days away: new report says the administration has spent $684M and counting to promote the law

RICH KARLGAARD: Well yes. The key word is taxpayers. It's us; it's we the people that are funding this. If ObamaCare is such a big win, it should attract people on its own. Certainly had a lot of publicity. There is another thing that is troubling the way that President Obama degrades the office of the president when he goes on comedy shows and things like this to promote. We're paying for it in two ways.

RICK UNGAR: Just because you don't watch the shows he's going on believe me, it doesn't degrade the presidency. Look, there are any number of huge products out there that you never would have known about if they had not advertised. So to say that if it's so great why do you have to advertise, is silly. Also, let's keep in mind that $700 million is over a period of years. With the states they will spend on promoting.

SABRINA SCAHEFFER: It is real money. Rick might quibble with the number, this is not administration known for coming in under budget. This is a problem when government gets into business and commercial industry. There are advertising fees; there are also legal fees, all sorts of things that go in running a business. The problem is they don't have money of their own so they take it from the taxpayers. And I don't have retribution. If I get a product that I don't like or I think there has been false advertising in the private marketplace I can go to the better business bureau, I can have a claim against the company. I don't have that power with the government.

BRUCE JAPSEN: On this money being spent, think of it as a return on your investment. People are going to get a physician, get outpatient care, and stay out of the expense of hospitals. This is not a new thing when the Republicans were creating healthcare entitlements in Massachusetts with Romney care and the Bush Medicare drug benefit, they did this as well. The government spent money to get seniors signed up for the drug benefits and that has been a wonderful program for seniors.

MIKE OZANIAN: ObamaCare should be scrapped. Limits choice, and its costs are much more than before. So it's raising costs and limiting choice. We should not have this legislation at all. It's absolutely horrendous.

STEVE FORBES: Yeah, David, it's worse than putting lipstick on the pig. This is trying to make the pig Miss America. It's not going to work. The fact of the matter is it's a rotten product, dysfunctional and cheating young people. They can get good insurance in a free market far cheaper. We need free market with effective safety nets instead of a government run junk system.

EPA 'land-grab' rule crossing the line, when it comes to private property?

RICK UNGAR: I don't think so. I got to tell you, this is so dramatic I actually sat down and read the regulation that is being proposed. Fascinating reading. Look, you guys are overstating this. There has to a significant nexus between whatever would be on the private land feeding into the public waters. The chances of that happening with your swimming pool or your pond are virtually none.

ELIZABETH MACDONALD: I kind of agree with Rick Ungar, this is clearing up rules about water pollution. I don't want big corporations polluting the streams and rivers.

MIKE OZANIAN: What this regulation is about the Supreme Court has overturned over the past several years, two big rulings by the sixth circuit court. The court wanted to rule that waterways didn't have to be navigable. The Supreme Court said no, you're wrong. This is about expanding that so the EPA has more power.

STEVE FORBES: We should, David. And the agricultural department in fact is trying to get the head of the EPA to pay visits to farms which she is finally starting to talk to farmers and recognize irrigation ditch is not the Mississippi river. The fact of the matter is we have wetland regulations, which have been abused against property owners by the army corps of engineers. Property rights over government rights.

SABRINA SCHAEFFER: This is a problem of process, Democrats fail to get any meaningful environmental legislation through so they push it through the EPA, the clean air act, it happens time and again.

Candy Crush stocks! Candy Crush is officially public, but so far it's getting crushed. Tell our viewers what stock won't get crushed!