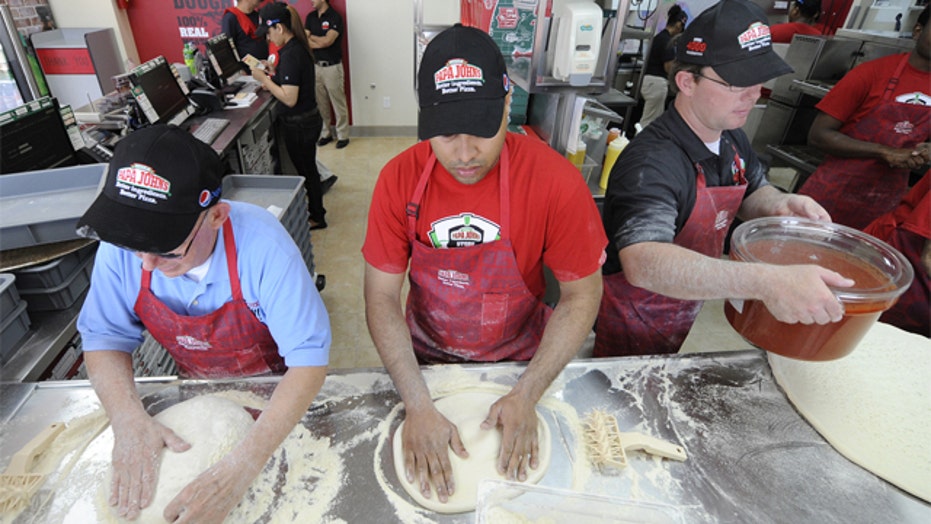 LARRY GLAZER: This is another unfortunate example of how Obama Care will hurt real workers in the real economy. It will lead to lower wage growth, lower economic growth, and more part-time jobs being created at the expense of full-time jobs. This is a dismal result.

SUSAN OCHS: There are a couple of CEOs who have said they're going to shift to part-time workers, but in a report that came out, 75 percent said it would have no impact on their hiring plan. When you see the data you always see a huge uptick in part-time workers. The real problem is we haven't had a real economic recovery like we need to.

GARY B. SMITH: I would agree with Susan if it was just a few CEOs, but its not. It's CEOs from companies like, and this is just off the top of my head, Subway, White Castle, Hardee's, Regal Entertainment Group, local community colleges, and local governments like the one in Long Beach. This is just the start. The numbers are starting to add up. For every full-time job, we've added 3.4 part-time jobs. With every normal economy the ratio is always flipped. It's always 5 full-time jobs for 1 part-time job. We're becoming a nation of fast food burger flippers.

TRACY BYRNES: We talked about it before, if you add an input cost to my business, I am going to figure out a way around it. That's what we're seeing with these small business guys. In the numbers this week we saw hourly hours worked fall and that's a bad sign as well. That means they're not getting as much time as they want or need. They're getting fewer hours and the reason is costs are going up with regard to Obama Care.

JONAS MAX FERRIS: They want a dynamic work force. They want everybody part-time. It's not just America and it's not bad thing. First of all, in England where they have national health care, they have a record number of part-time workers. This isn't necessarily because of Obama Care. What's really going on is employers don't want to necessarily hire you. They don't want to give you 401(k) or health benefits. You guys are acting like the '50s model; we should want a flexible part-time workforce.

JUDGE: TEACHER PERFORMANCE RATINGS IN L.A. SHOULD BE MADE PUBLIC

TRACY BYRNES: The teachers should be judged the same way as they judge students. Do I think it's fair for my children, no, but I should have a right to know what my teachers are doing with the students? Tenure should be abolished. You'll see your property taxes fall precipitously because you wouldn't have to pay the burden of the tenured teachers that have been on the books all these years. If they have good scores, pay them more. Corporate America judges you and you take tests in corporate America. You should be doing it in public schools.

JONAS MAX FERRIS: I'm for the rating and ranking system, using it analytically, promoting teachers and not just treating them as a big union giveaway. However, knowing teachers' grades isn't going to do anything. I can't fire a teacher. It's important for the administration to use it. I don't see what the tell-all in the paper is going to do as far as teachers' pay.

GARY B. SMITH: Public schools are a monopoly. Whether the teachers are good or bad, I still have to buy their crappy product. If I know what they're doing in the classrooms, at least I can have input. I can band together with other parents. I could go to the superintendent. I could even move out of my neighborhood and go to a different school district. I can do something but I need that information. Without it, I don't have a free market. We need that information and the public is deserving of it.

SURVEY: MORE THAN 1 IN 3 YOUNG ADULTS LIVE AT HOME WITH THEIR PARENTS

JONAS MAX FERRIS: It sounds worse than it is. It boils down to what they're doing. Maybe they're working and saving to buy a house. Maybe a lot of them are starting their own businesses, which is risky. They won't have much income coming in the beginning. So it depends what they're doing with their time. I think a lot of them have a plan and it's a little better than plans of people from five, ten years ago.

GARY B. SMITH: It happened with me and my kids. I lived with my parents a year after graduate school for about a year. Here are all the things I missed. I didn't know about how to pay utilities. I barely knew how to write a check. I didn't know how to balance my finances or cook a meal. I wasn't, as Jonas said, responsible. I wasn't saving money for a house. I spent all the money I had. My mother cooked. It was finally when I got kicked out of the house, that I learned how to be an adult. That's the problem with this. The kids living at home, as well meaning as they may be, have not yet moved into adulthood and that's what we really need to power this economy forward for the next generation.

TRACY BYRNES: I don't think any kid wants to live with their parents forever. The truth is I worry more about the parents because now they're stuck in this generation where they're taking care of their kids and they're aging adults. I worry more about them. I think the kids for the most part want to get the heck out on their own and God willing they have a plan.

SUSAN OCHS: I think one of the challenges that we're seeing here, and it doesn't show up in the data as much, is so much is driven by the debt load that students incur in college or before while working internships. People are coming out with a huge debt burden. I was fortunate not to, I was about to go out, get a job, support myself and pay rent. If I had to pay $15,000, $20,000 in college loans, I could not have done that.

LARRY GLAZER: Through no fault of their own, these kids have graduated into a horrific jobs market. The unemployment rate for young people is twice the national average. So from lemons, you make lemonade. So, move in with mom and dad, save money, and pay down the massive loans. These kids are able to become contributing members of society and then they can move out and live the American dream. It's not good for the parents because they have to work a whole lot longer and it won't make room for young people in the workforce.

GARY B. SMITH: STOCK UP ON THIS! (SPLS) SHARPENS 15 percent IN 6 MONTHS

LARRY GLAZER: TAKE A VACATION WITH (VWO); UP 15 percent IN 1 YEAR