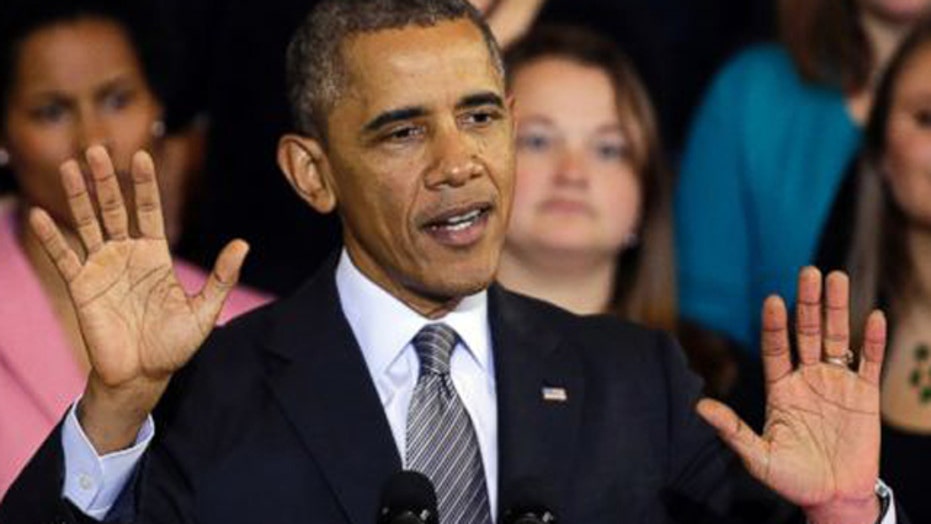 ObamaCare about to put jobs market on life support?

JOHN LAYFIELD: Unfortunately, what we said is coming to pass. We said all along this is going to hurt the economy. It's not a very strong recovery going on and stuff like this definitely hurts. 45 percent of small businesses say they are curtailing hiring because of ObamaCare. 29 percent say that they are actually letting people go because of ObamaCare. There have been over 20 different new taxes created to pay for ObamaCare. We were told basically this is going to be free. That is not happening. It's very costly and it's hurting small business and hurting the economy.

JONAS MAX FERRIS: It's a complex implementation and it confuses people, but will it actually give less hiring over the long run? That seems like a little bit of a stretch. I'm not saying it's a good thing and the whole notion of having to pay for employee health care as an employer is a negative to the job market. That system used to exist, it is more complicated now with ACA, but I don't see it leading to massive firings. 96 percent of businesses say it doesn't even apply. Others can buy their way out. Others were already providing health care. It is a bureaucracy, but I don't see it being a major job killer.

GARY B SMITH: Even a small impact, when you have a small u-6 unemployment rate of 13 percent or 14 percent, it makes a huge difference. We are right now at kind of the break even before falling back into a recession or, god forbid, a depression. Any little thing like this, I don't think ObamaCare is a little thing, can have a huge impact in centers teetering down.

DAVID MERCER: If you look at the numbers of jobs created under Bush for eight years that was 1.1 million, and that was of course without any health care reform. With health care reform, you've seen in the last 48 months, you've seen 8.7 jobs created. So just taking those numbers, I think it simplifies it for us all that even with ObamaCare, you still have job growth. I would ask anybody, would you like to have job growth and health care, or would you prefer lower job growth and no health care? I think the preference would be for the former rather than the latter.

TRACY BYRNES: You know there's an issue when the CEO of GE says something. If nothing else, he should be working his way around it and trying to defend around it and he's not. He is saying, "Look what's happening to my bottom line because it?" That to me was the biggest sign of the entire week's news. Little businesses might not be firing, but they sure as heck ain't hiring because they don't know. There is so much uncertainty surrounding this thing. Why bother when I can go freelancers, consultants, and not have to deal with it?

GARY B SMITH: It's the one part of our economy that's booming. We are the ones, the United States, that have created these enterprises and they have spawned other enterprises. What we want to do, a lot of these states and the federal government, is they make the Amazon's of the world the new oil companies, the new piñatas where they can go to and get more tax revenue to spend idiotically. Why would we want to bring the Amazons of the world down to the level of other big bucks retailers that have gone out of business? We have this great growth and we should be investing in it.

TRACY BYRNES: Look, people are shopping online, bottom line, and, unfortunately, it's completely unfair. I don't want taxes at all. So either get rid of sales tax all around, brick and mortar and Internet, which we all know that's not happening any time soon, or you level the playing field. It is just not fair, or you're going to put every brick and mortar business out of business.

JONAS MAX FERRIS: Look, the Internet is not a growth phase anymore. It's not like we'll topple it with taxes. They can handle the taxes. The other companies are the ones going out of business. It's developed enough where they can play by the same rules. Amazon and the others are putting infrastructure in these states to distribute goods that same day. They have to pay this tax and frankly they don't have the sales tax, states still need money to fix stuff.

DAVID MERCER: Amazon is making enormous profits and has become enormous in itself, and the bricks and mortar stores can't keep up. We all know why this is. We go to the store. We look at the prices. Then we go back home in the Internet and we end up buying the same thing cheaper. Why? Because Amazon doesn't have to pay the taxes. I believe they need to pay the taxes and not drive the brick and mortar stores that are adding cohesively to the community, adding jobs and so forth, in order to make them just as competitive.

JOHN LAYFIELD: If you order from a store in your community, order by phone you pay tax, pick it up in person you pay tax but on the Internet you don't. It's not a fair system. Amazon is down 10 percent in sales in states that have now instituted a tax. We don't need a phased in runaway but for the sake of fair competition we need to phase it in over time.

TRACY BYRNES: The flight attendants should have noticed he was getting unruly and maybe do something about it, but don't blame all of us for this. I like my glass of wine regardless of the fact that it's a label I never even heard of.

JONAS MAX FERRIS: These drunks are subsidizing my cheap tickets, because if they can't make money serving $8 drinks to people for the entire flight the ticket prices are going to go up. This is a way some people pay for everybody else's tickets. So, look, are there drunks? Sure. But you can bring the little bottles through security. They'll drink anyway and try to kick the cockpit door in. It won't make it go away because they're not serving you drinks on the plane.

DAVID MERCER: I think they should be paying higher or greater penalties for disorderly conduct in the sky, or trying to break into the cockpit.

GARY B SMITH: Every airline should determine their policy. If it's so important for you to fly with no drinking, I'm sure some airline will come up with that marketing campaign.

JOHN LAYFIELD: Look, have you seen the service on most of these airlines lately? Drinking should be mandatory before you get on the flight. Look, the problem here is not drunks. The problem is idiots. Whether they're sober or drunk, they're idiots. I think what you should do is you see some loud, obnoxious dude, then just Taser the moron.

GARY B. SMITH: STREAM AWAY! (NFLX) DELIVERS A 20 percent GAIN BY SEPT

TRACY BYRNES: PUT DOWN THE PHONE & YOUR KIDS WILL BEHAVE BETTER