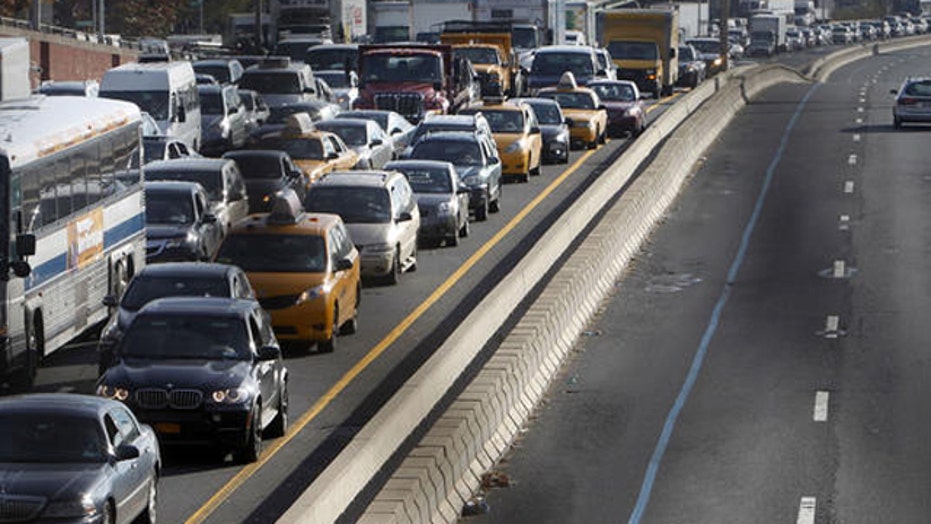 Would it work or just be a waste?

IN FOCUS: Average American loses $818 a year sitting in traffic

STEVE FORBES: Because if you have government involved, it's going to be a waste. You look at other infrastructure in this country, like FedEx, UPS, you look at what's done with railroads, and government got out of the way there, great infrastructure. Let's have private equity involved. Public private partnerships is a start, but more private equity that way you get more for less instead of these long drawn out government procedures, bloated wages in the like we will get more bang for the buck by bringing in free markets.

RICK UNGAR: Listen, I'm not against it in concept, but here is where you run into a problem. One thing, it's not happening frequent enough, we have a very serious problem that all of us should be able to agree to. The other problem is that there are certain things like roadways that you cannot give a monopoly to a private company. Don't you feel with a little bit better with government owning the roadway instead of one private company who can turn off the spigot and keep you from getting to work?

ELIZABETH MACDONALD: I agree but look what happened with the last infrastructure spending stimulus plan, guess how much money the highways got? A big fat zero. In fact in New Jersey, that money was spent on highway ramps to nowhere. I don't know who that is for. The three stooges? That one ended up in a concrete wall or something who is that for? The three stooges? An Alaskan village with a population less than 200, they got a $15 million airport, why not Newark or Las Vegas? What happens is that it becomes a big pork project at the state level, where the states spend the money, the states get to have a monopoly on this money and they fritter away what they want on pork.

MORGAN BRENNAN: We don't necessarily need more of this, but going back to Steve's point the idea of public private partnerships, it takes a government guarantee; it takes a certain amount of money from the government. I think we need do need to start spending money on infrastructure, maybe more smartly than the examples you just put out there. Two reasons I think so, first, if you look at infrastructure spending, especially when it's done correctly, it gives you a bang for your buck, it can really create job growth, it can create economic growth, there are countless studies including a recent one from the San Francisco federal reserve that show this. The second reason is that down the road, you see better infrastructure, you see less air pollution, less healthcare spending down the road as well.

JOHN TAMNY: No, it's not going to change, when Rick Ungar says we have an emergency, I get nervous about my taxes going up and getting nothing in return. Let's face it, if we want better road and less traffic, bid out these road building to private profit motivated entities. I think you'll see innovation in how roads are built, prices for the times you drive those roads, and you'll see a reduction in traffic due through market forces, don't hand it to the government who is going to waste the money.

RICH KARLGAARD: Steve makes a great point and I understand Rick's impulse here. If you go back to the 1930s, the great depression, a lot of public works projects were accomplished and did pretty well and you have things like the Golden Gate Bridge built in 4 years. Now it takes 7 years to build an access road to the Golden Gate Bridge. Why? Because we have this extraordinary stopping power from environmental groups, public work unions have slowed down everything, made it more expensive. It just doesn't work the way liberals want it to work anymore. We have to go to a private mechanism.

Workers in Chicago pushing to get paid for working after-hours

RICH KARLGAARD: Well, it's just ridiculous, in a 24/7 kind of world, people would have that kind of complaint; it comes with the job with every other kind of job. In the private sector, if you ask for a raise or in this case overtime, you should do your fundamental job. Here is Chicago which is leading the country in its murder rate. It's on track to have 700 murders this year, ahead of New York and it has the gall to ask for overtime for emails?

MIKE OZANIAN: I more or less do, quite frankly I don't care how this case goes, I think it's going to be fun to watch from the side and I think it's going to be interesting. Does the police department want their emails vetted in court? Where I really agree with Rich is in the private sector, you do all extra work and over time in the hope that in the future you will be rewarded. Whereas unions are focused on doing less and getting paid more. I find that contrast very evident.

ELIZABETH MACDONALD: In their written policy it says if you want overtime, you have to ask for it. Case closed. They should ask for it right on the job so the fact that they are suing to get it is confusing. I have a lot of friends in law enforcement; they are telling me maybe some of these guys should pay taxpayers back for all the donut breaks they take too. There is a lot of abuse in the system where these guys filed for disability to double barrel the money they get in retirement. So there are a lot of problems still out there.

RICK UNGAR: You know I love that commercial but I found myself saying asking the question would Paul Harvey have said the same thing if he saw the agriculture business that get billions in government subsidies. Every generation has this tendency to say "oh when I was kid I worked so hard" people do work hard; they work harder in America than in any other industrialized nations. Let's not get crazy about this hard work.

STEVE FORBES: Yeah and you can see what it did to education, teachers did a lot of things like scrubbing down the blackboards after work, now you have whole rule books on that. Look what's happened to the education system. Instead of focusing on how to squeeze more from less, how about focusing on the job itself and people would gladly pay you more if they felt they were getting value for those services.

JOHN TAMNY: Absolutely, get it out of it. Why it is not called theft when the government takes my hard earned dollars, I don't own a house and gives it to someone else who wants to own one. If I go next door to rob my neighbor, the police will put me in jail but it's somehow not seen as theft or crime when people vote for politicians who will take from me and others so that they can own houses. I think it's wrong, get the federal government out of this business.

MORGAN BRENNAN: You can argue that point that given some of the recent programs, just given the fact that we are starting to see a decent housing recovery. I hate to be the bearer of bad news, if you want to take Uncle Sam out of the mortgage industry, there is no mortgage industry. Between Fannie Mae, Freddie Mac and FHA, those 3 entities underwrite 90 percent of all new home loans right now. Take those away, and you really don't have much of a mortgage industry. As long as Americans want their 30-year fixed mortgage, you're going to have to have Uncle Sam in the picture.

STEVE FORBES: That may be an understatement David. In terms of a private mortgage market, the government drove them out of business because of the government guarantees, implicit guarantees of Fannie & Freddie and now FHA. The government wrecks the market and says well if we aren't around we don't have a market. If you allow private market in there, privatize Fannie & Freddie, break them up, privatize FHA, break it up, I guarantee you will get a vibrant market and by golly, in terms of government, government has hurt the housing market, we have at least a dozen countries of higher home ownership rates than we do and they don't have all of these crazy programs.

MIKE OZANIAN: No we should definitely move in that direction. This was doomed to fail for a long time because FHA loans typically require a much lower down payment than non FHA loans so the lenders are out there giving loans to people they know are going to default because they are going to be paid by taxpayers. This is nothing but a scheme by the federal government to redistribute wealth from higher earning people who pay a higher proportion of taxes to lower income people, that's all it is.

INFORMER: Stocks to help you get out of the $818 traffic jam and into the open road of making money